The Conservatives have opened up their widest fundraising lead over the Liberals in years, but their national dominance masks what is a more competitive fight for dollars in some of the battlegrounds that will decide October’s federal election.

But a detailed analysis of the data shows that the Conservative advantage is driven in large part by the party’s enormous fundraising edge in Western Canada. In other regions of the country, such as the swath of ridings in the Greater Toronto Area that likely will determine the winner of the election, the Conservatives do not enjoy the same kind of edge.

The quarterly filings with Elections Canada do not reveal the identities of every donor, but all contributors giving at least $200 in a quarter are listed, along with their postal codes and the cities in which they live.

This makes it possible to get an idea of where parties are doing their fundraising. Those $200-plus donations should give us a good image of the parties’ entire fundraising operations, since those donations tend to be highest where the parties are polling the strongest and they make up most of the money the Conservatives and Liberals raise.

The Conservatives and Liberals are neck-and-neck in fundraising in Ontario, with the figures showing the Conservatives raising about 46 per cent of every reported dollar donated in the province against 43 per cent for the Liberals.

Even accounting for the fact that the quarterly filings don’t reveal the location of every donor, that’s a far narrower margin than the roughly two-to-one disparity in national fundraising between the two parties. It’s also similar to how the numbers broke down in Ontario in the first quarter of 2015, before the Liberals won two-thirds of the province’s seats.

The situation is the same in Atlantic Canada, where the two parties are running nearly even in fundraising. The records show the Conservatives holding a wide fundraising edge in New Brunswick — as they did in 2015 — while the Liberals have raised the most money in Nova Scotia and Prince Edward Island.

Newfoundland and Labrador is about even, with the Liberals raising the most money in St. John’s and the Conservatives outpacing them in the rest of the province. That rural-urban divide also exists in Nova Scotia, where the Liberals have the edge in Halifax and Dartmouth but the Conservatives are ahead elsewhere.

The Conservatives are raising most of their money in Western Canada: 56 per cent of the dollars the party raised from donors of $200 or more came from the West. That compares to just 23 per cent for the Liberals in the region.

The Liberals raised the most money in Quebec, taking in about double what the Conservatives did in the province.

Breaking down the fundraising map

The Conservatives raised more money than the Liberals in eastern, southwestern and northern Ontario, but were narrowly behind in Toronto and the surrounding suburbs. The Liberals held a three-to-one advantage in Ottawa and were ahead in Mississauga and Brampton, but trailed the Conservatives in Hamilton, Kitchener-Waterloo and London.

The Liberals were ahead in Guelph, where the Greens raised 26 per cent of the money recorded as coming from the city. This is where the Ontario Greens hold a seat, suggesting that the federal party may be capable of a breakthrough there.

Green Party Leader Elizabeth May with Ontario Green Leader Mike Schreiner. The Ontario Greens won their first seat in last year’s provincial election in Guelph, where fundraising figures suggest the federal party has a base of support. (Kenneth Armstrong/Canadian Press)

In Quebec, the Liberals enjoy their widest fundraising advantage in the southern and western parts of the province, including the suburban areas around Montreal and the Outaouais region.

The Conservatives have closed 2015’s fundraising gap in Montreal and are most competitive in eastern Quebec (as is the Bloc) — but not in Quebec City itself, where the Liberals raised nearly three times as much money as the Conservatives among donors giving $200 or more.

The Conservatives raised five times as much as the Liberals in Calgary and just under three times more in Edmonton.

In British Columbia, the Conservatives raised more money than the Liberals in battlegrounds like Burnaby, Surrey, Vancouver and Victoria. The party also enjoyed a wide edge in 2015 in B.C. fundraising before the Liberals scored some historic breakthroughs there; that edge has increased since.

One place where neither the Liberals nor the Conservatives came out on top was in and around Nanaimo. A byelection will be held Monday in the riding of Nanaimo–Ladysmith, a seat previously held by the NDP. Filings show that — among donors giving $200 or more — the Greens raised 54 cents of every dollar from donors living in Nanaimo and Ladysmith, more than all of the other parties combined.

Signs of trouble for Singh and the NDP

Compared to the Liberals and Conservatives, more of the NDP’s fundraising came from donors contributing less than $200 each. So the geographic source of most of their funds is unknown. But even accounting for that disparity, there is little good news here for the New Democrats.

Only in Nova Scotia and B.C. did the NDP take in at least 10 per cent of the money raised by all parties. The party’s strongest results came in Hamilton, Ottawa, Victoria, Saskatoon and Burnaby — where leader Jagmeet Singh won a seat in a February byelection. 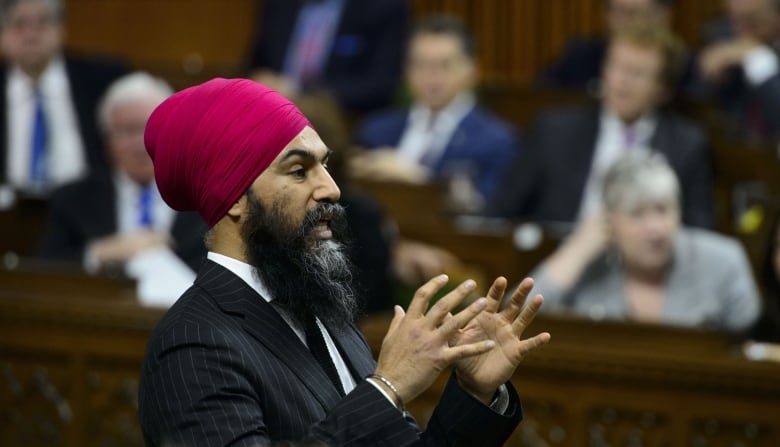 But with the exception of Nunavut, the NDP did not beat the other parties in fundraising in any province, territory or major city.

Those results don’t bode well for the party in the federal election, with the NDP raising just four per cent of tracked donations in Quebec and the GTA and just a third of the Liberals’ take in Vancouver.

Also concerning for Singh — and the NDP’s hopes for a breakthrough in the South Asian community — is the fact that fundraising for the NDP was anemic in Surrey and Brampton. At least among donors giving $200 or more, the Liberals beat the NDP in Brampton — where Singh used to have his seat in the Ontario provincial legislature — by a margin of more than 35-to-one.

Of course, it’s voters — not just donors — who have the final say in October. The party that raises the most money doesn’t always win. Sometimes the party that has few resources can score impressive breakthroughs. There isn’t a direct relationship between dollars raised and votes cast.

But the regional breakdown of the latest fundraising figures points to more complexity and nuance than the overall numbers might suggest  — and demonstrate again that the fall federal election will be decided the way they all are: one battleground at a time.