Crown-Indigenous Relations Minister Carolyn Bennett said Thursday she would back off plans to replace two key policies that have for decades directed the path for First Nations to move beyond the Indian Act.

Bennett was facing a groundswell of opposition to plans to replace policies on modern treaty and self government — known as the comprehensive claims and inherent right to self government policies — with one new policy by June.

“Let me tell you it’s not happening,” said Bennett, to applause, during a speech at a forum in Edmonton hosted by the Assembly of First Nations to discuss the issue.

“We know we have not done sufficient work at this time to be moving ahead.”

The move to replace the policies had alarmed leaders and grassroots activists who saw the tight deadline as an attempt by Ottawa to reassert control over the ability of First Nations to move out from under Indian Act through a new policy wrapped in the language of reconciliation.

More than 100 people from various treaty First Nations demonstrated against the proposed policy changes on Wednesday and crashed the AFN meeting vowing to stop what they called a “White Paper 2.0” plan — in reference to Pierre Trudeau’s 1969 White Paper that aimed to eliminate the distinct status of First Nations people.

Bennett said her officials are now working on designing a “directive” to guide federal negotiators at dozens of tables currently discussing modern treaty and self-government agreements with First Nations.

Directive to be guided by UNDRIP

The directive would trump the existing modern treaty and self government policies — which Bennett said were not being followed and are being pulled from the government website — and would be guided by the UN Declaration on the Rights of Indigenous Peoples.

“In some ways we haven’t been using them for the last three-and-a-half years,” said Bennett.

“There was an understanding before that it was the political will of this government, but now it would be written down as a directive to all the officials.”

The comprehensive claims policy, first announced in 1973 and modified three times since then, primarily affects First Nations who have never signed treaties, like most First Nations in British Columbia.

The inherent right to self government policy, enacted in 1995, primarily affects First Nations that have signed treaties, like those in the Prairies and large parts of Ontario.

The federal government has previously refused to negotiate any self government or modern treaties outside the framework of those two policies, which have been persistent irritants between First Nations and Ottawa.

Bennett said federal officials would no longer require First Nations to agree to extinguish or modify their rights in exchange for a self-government or modern treaty deal. The minister said negotiations now start with a blank piece of paper and the mandate for the tables are co-developed between negotiators for both sides, allowing options in talks like a focus on agreements around fisheries or education.

Bennett said a draft of the directive would be shared for input with First Nations before a final version is approved and posted publicly. She said it would be drawn from what federal officials have heard from the about 50 tables where modern treaties and self-government agreements are currently under negotiation.

The Trudeau government has been repeatedly forced to dial down its ambitions in reshaping Ottawa’s relationship with First Nations, moving from promised rights legislation to designing a new policy to now issuing a new directive for federal negotiators.

“Overall what minister Bennett was stating today … is still far apart from what chiefs are calling for, it’s still not co-development,” said Wilson.

Wilson said federal officials are playing First Nations against each other, pushing on with some First Nations, like those that are part of the B.C. treaty process, negotiating over lands that are also claimed by neighbouring communities that have refused to enter talks.

“The continuation of the modern treaties is continued extinguishment,” said Wilson.

“It started even more overlaps and even more extinguishment and alienation of those lands.”

Some still skeptical about process

Gord Peters, the deputy grand chief for the Association of Iroquois and Allied Indians (AIAI), said it’s clear to him that, despite Bennett’s announcement, the fix is still in for a predetermined outcome. 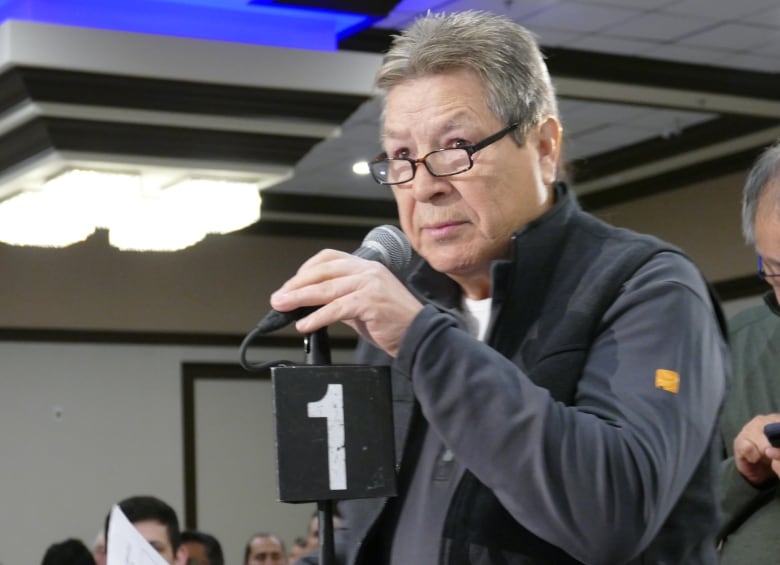 Gord Peters, deputy grand chief of the Association of Iroquois and Allied Indians says he believes the fix is still in. (CBC)

He said the aim of the negotiations is to get First Nations to trade in their inherent rights to fall under Canada’s sovereignty where any jurisdictional powers come from Ottawa or through agreements with the provinces.

“Anytime a government tells us they’re going to recognize our rights, it means they are going to delegate, that it’s going to become contingent on the federal government giving us something,” said Peters.

“When they give us something, they transform that into an Indigenous law that comes from section 35 from Canada, not us.”