Every year around this time, Moscow is transformed into a giant military boot camp, with thunderous T-72 battle tanks and menacing-looking Iksander ballistic missile carriers rumbling past city landmarks, all in rehearsal for the annual Victory Day parade.

While tens of thousands of Russians will line the streets of the capital Thursday to watch the demonstration of the country’s might, Russia’s military leaders have been paying close attention since February to the public’s response to a much smaller military showcase.

The Syria Breakthrough Train, a travelling exhibit of captured equipment and other war souvenirs from Russia’s five-year involvement in the Middle Eastern country, has just wrapped up an epic 20,000-kilometre, 61-city journey through Russia, from the Baltic to the Pacific.

The train, made up of 20 cars carrying captured tanks, rocket launchers, improvised explosive devices and other military hardware, has returned to Moscow just in time for Thursday’s celebrations.

“Thanks to the hard work and feats of [our] military servicemen, today, a majority of the Syrian Arab Republic is liberated from the terrorists,” said Maj.-Gen. Yuri Yevdushenko, one of the Russian military officers who has been accompanying the train.

“Russia extended its hand … and offered to help stop the black plague of the 21st century — international terrorism,” he continued, praising the Syria mission using language similar to how Russians glorify the victory over Nazi Germany 74 years ago.

This American-made Humvee was used by opposition forces, then captured by the Islamic State and later taken by the Syrian army. (Pascal Dumont/CBC)

Syria is important to President Vladimir Putin’s objectives to project Russian influence and military power into key regions around the world.

The mobile exhibition is meant to demonstrate that the nation’s blood and treasure is being well spent in the war-ravaged country — even as independent polling suggests Russians are, at best, lukewarm to the mission.

Our Moscow bureau crew caught up with the train on one of its last stops, in the Golden Ring city of Yaroslavl, about three hours north of Moscow. There, the train was met by what appeared to be a carefully choreographed reception of military singers, cadets, war veterans and several hundred curious local residents.

While most Western nations consider Syria’s ruler, Bashar al-Assad, to be a war criminal, Russia sees Assad as a valuable ally in an important part of the world. Russia’s intervention in 2015 on Assad’s side very likely saved his regime from collapse.

A massive Russian air bombardment helped end a stalemate with opposition forces and pushed ISIS fighters into the eastern desert, where the final ISIS positions were captured earlier this year. 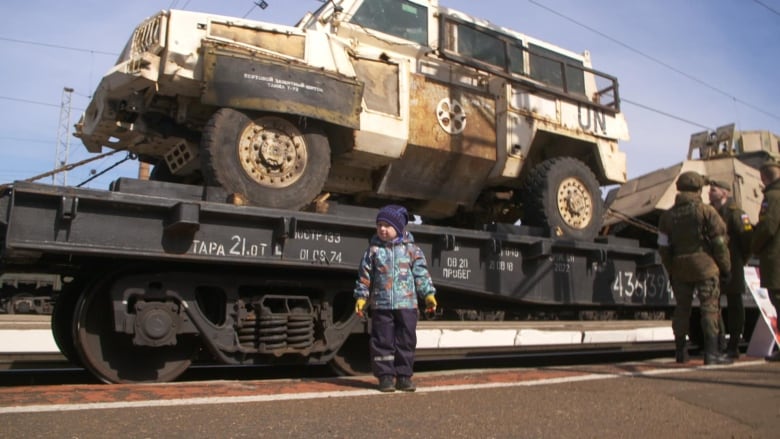 This former UN peacekeeping vehicle is part of the travelling exhibit. (Alexei Sergeev/CBC)

Pro-Western human rights groups, such as the Syrian Observatory, claim indiscriminate Russian bombing led to the deaths of thousands of civilians, especially in cities such as Aleppo.

But the messaging from Russian officers onboard the so called “trophy train” omits any mention of that. Instead, Russia claims its actions liberated thousands of Syrian towns and reclaimed tens of thousands of kilometres of territory.

“Russia sends humanitarian aid to Syria and helps win back the territory from terrorists,” a 12-year-old military cadet named Pavel told our crew in Yaroslavl, as he looked approvingly at the train display.

One of the train cars featured an American-made Humvee armoured vehicle that had been captured and modified by ISIS for suicide missions with heavy armour added to the front. Another train car carried a Toyota Land Cruiser with a French-made rocket launcher on the rear.

One of the more curious “trophies” was a RG-31 Nyala armoured personnel carrier emblazoned with the lettering of the United Nations. Online sleuths who claim to have tracked down the origins of the vehicle say it was once part of a UN peacekeeping force in the Golan Heights. The Nyala apparently had to be abandoned when UN forces withdrew and was later captured by opposition fighters. 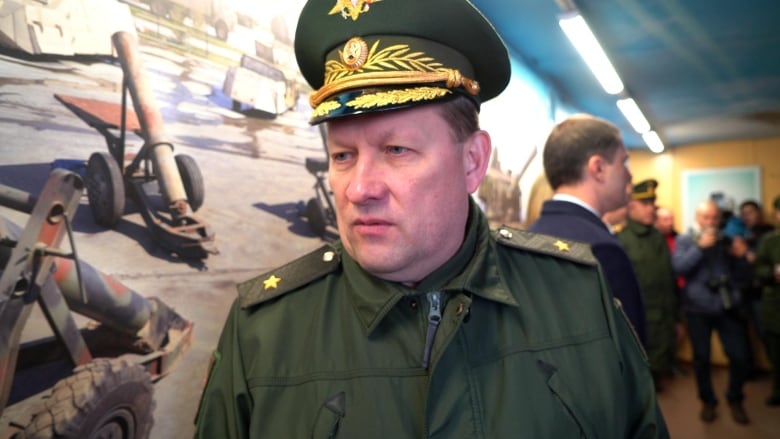 Many critics have noted that in discussing the exhibits aboard the train, the Russian soldiers make no distinction between Islamic State fighters and other, Western-backed opposition groups that were battling Assad’s regime.

An investigation by the journalism collective the Conflict Intelligence Team claims that much of the hardware on-board the train was never used by the Islamic State.

Indeed, they group claims some of it — such as a Russian-made T-62 tank — was likely purchased by Syria’s government, captured by rebel fighters and then recaptured by Assad’s troops.

Nonetheless, having an abundance of Western-manufactured weaponry used by both the Islamic State and opposition forces helps fuel the Russian narrative that the U.S. and Europe are abetting terrorism, while only Russia is fighting it.

“We will present samples of things taken from terrorists — military equipment — that shows the international level of help for terrorists by different countries in the world,” said Maj.-Gen. Yevushenko.

Perhaps one of the most brazen examples of distortion is a so-called chemical weapons lab featured inside one of the train cars. The equipment includes canisters ad stainless steel vats, along with a mannequin dressed in a hazmat suit.

A Russian soldier told the crowd in Yaroslavl that the lab was found in April 2018 by residents of Douma “after [opposition] fighters were driven out of the city.” 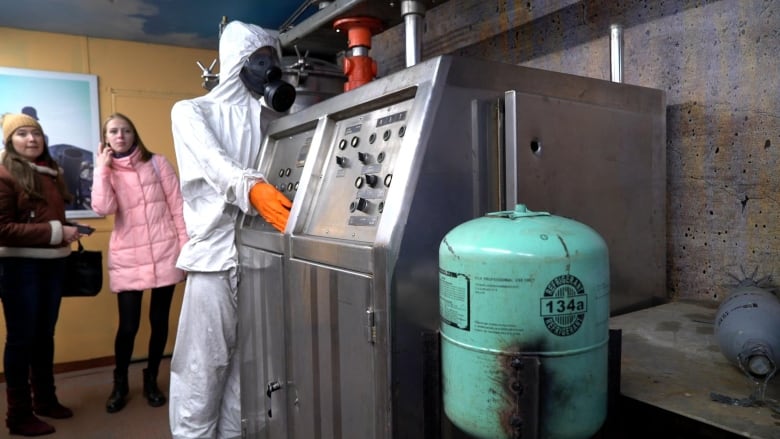 Seventy civilians died in Douma that month, from what most Western nations believe was a gas attack perpetrated by Assad’s forces. The UN’s chemical weapons watchdog investigated and concluded that chorine gas had been used and disputed Russian claims that opposition forces were responsible. Yet on this tour, the Russian soldier providing commentary claimed the lab belonged to “terrorists,” and that they were to blame for the gas attack.

Vladimir Gusev, who came to see the train with his five-year-old son, Kostya, said he saw no reason to doubt anything he was being told.

“I understand the terrorists used this,” he told our crew. “They made their own tools and chemical substances and used them against the regular Syrian army and common citizens.”

Asked whether the exhibit will help generate more support for Russia’s continued involvement in Syria, Gusev said, “I think it helps raise patriotism.”

Exactly how much patriotism the trophy train has the ability to deliver is up for debate. 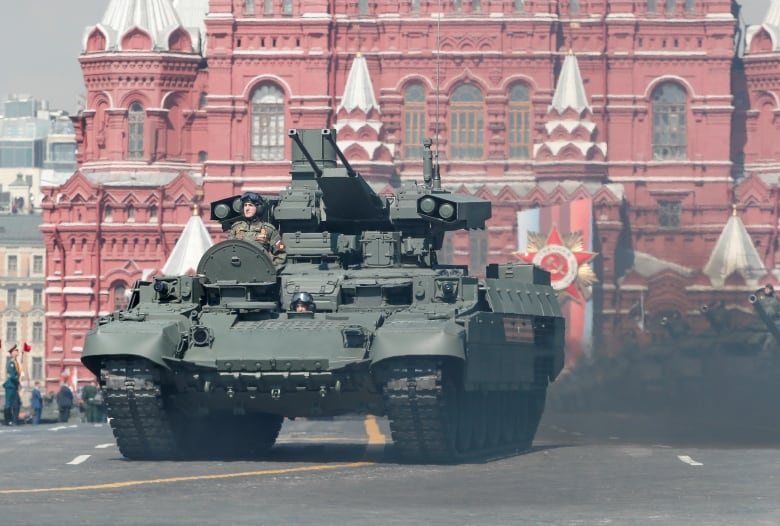 The Victory Day parade in May is an annual showing of Russian military might. (Shamil Zhumatov/Reuters)

A survey published earlier this week by the Levada Center, an independent Moscow-based polling group, suggested for the first time that a majority of Russians — 55 per cent — favour ending the Syria mission.

“They think that the government [needs] to spend more money inside Russia than outside Russia,” Levada pollster Stepan Goncharov told CBC.

“Mostly, people understand that we are testing our military weapons, we’re improving our international image, but they don’t understand what economic benefit they get from there — or even if there is any economical benefit from being there.”

Regardless of whether or not the Syria train, and its Kremlin-inspired talking points, will help win over skeptics, it did draw good crowds in Yaroslavl and along dozens of other stops. In that sense, it may have accomplished at least part of its mission.