When empty nest syndrome began to settle in, Enn Pomerleau decided to run it off. Literally.

When the last of Pomerleau’s five children began moving out of the family home in Leduc, Pomerleau figured she would take up running marathons and triathlons.

But with a twist. She pledged to race in every province, territory and state in North America.

“To be honest, my husband was still working, I was a stay-at-home mom and my kids had all moved away and I just started to get bored,” said Pomerleau, who now works full time at the Leduc & District Food Bank.

“I thought I could do this to keep myself busy. That’s how it started.”

Nearly a decade later, Pomerleau accomplished her goal on April 27 when she crossed the finish line of a 5K charity race in Hawaii.

It was the 63rd run of her North American mission.

“Even though I didn’t really see the magnitude of what I was doing, to actually finish it, it feels good. It feels like I accomplished something.”

I got a T-shirt from every place, every run. I’m going to make a quilt out of them.– Enn Pomerleau

Pomerleau had been a recreational runner for more than 40 years before she started running across the continent.

Her first race was a triathlon in New York in 2010 but most of her events have been 5K stints. 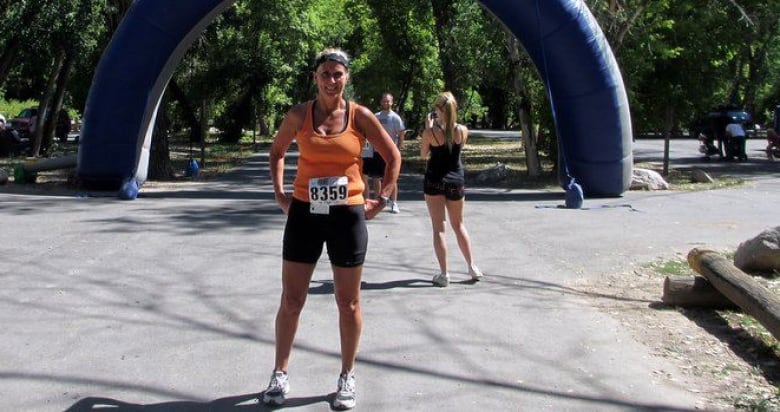 Pomerleau had been a recreational runner for more than 40 years before she started running races across the continent. (Enn Pomerleau)

“I’ve been running for a long time. Long enough that my knees know it,” Pomerleau said in an interview with CBC Radio’s Edmonton AM.

“I got a T-shirt from every place, every run. I’m going to make a quilt out of them.”

She’s run in heat waves and in torrential rain. One time — thanks to a painful migraine and a dose of pain medication that really didn’t agree with her stomach — she ran an entire race with her eyes closed.

“And we did a race for bacon,” she said. “I can’t even remember which state but we had lots of protesters out there because it was for bacon, so that was interesting.”

Pomerleau feels kind of uneasy about accomplishing her goal. Her feet are beginning to itch for a new adventure.

“It’s just sort of surreal. I don’t know whether it’s sunk in because for so long I’ve just been doing it. I don’t know how I feel,” she said.

The answer? In May of 2020, she’s going to run a half-marathon on the other side of world.

“I’m going to run the Great Wall of China.”