Ottawa needs to ‘walk the walk’ on reconciliation, said a Federal Court judge in a ruling released Tuesday as part of an ongoing class action lawsuit launched by residential school day scholars and more than 100 First Nations.

The ruling by Justice Sean Harrington issued on Tuesday dismissed a motion for advanced costs filed by the lawyers for residential school survivors known as day scholars because they attended the institutions during the day and went back home in the evening.

Day scholars were not eligible for the common experience payments that were part of the settlement — $10,000 for the first year of living at a residential school and $3,000 for every year after — and are fighting to get the same treatment.

The class action was also filed on behalf of the children of day scholars and 105 First Nations that have signed on to the court action whose members attended residential schools.

The First Nations are seeking compensation for the impact residential schools had on language, culture, heritage and wellness in their communities.

In his ruling, Harrington highlighted a passage in Ottawa’s amended statement of defence that described the importance of acknowledging and “resolving the legacy” of residential schools in helping further reconciliation.

“I hope that Canada will not simply continue to talk the talk, but will now walk the walk,” wrote Harrington.

However, Harrington also noted that Ottawa still denied “there was a uniform residential school policy” and that it argued that the federal government was only liable for what it couldn’t pin on the various religious orders that ran the schools.

The legal strategy could lead Ottawa to examine in discovery each of the 105 bands involved in the lawsuit along with all the “literally hundreds of religious orders” involved in the schools, wrote Harrington.

“All of this would take years. The plaintiffs are dying,” wrote Harrington.

“Is it its intention to grind these 105 bands into poverty and bankruptcy before this matter ever proceeds to trial?”

Crown-Indigenous Relations Minister Carolyn Bennett’s office told CBC News in March that it would be amending the original statement of defence —which included the denial of a residential school policy — because it didn’t reflect the Liberal government’s “values.”

Bennett’s office said the original statement of claim would be reviewed in light of the litigation directive — that Ottawa seek to settle instead of fight Indigenous-related cases — issued by former justice minister Jody Wilson-Raybould shortly before she was shuffled out of her position in January.

Harrington wrote there was little change to the core legal arguments in the amended statement of defence.

“It has repeated all of the defences set out in the original statement of defence,” wrote Harrington. “The same defences did not stop it from settling with students who resided at the schools.” 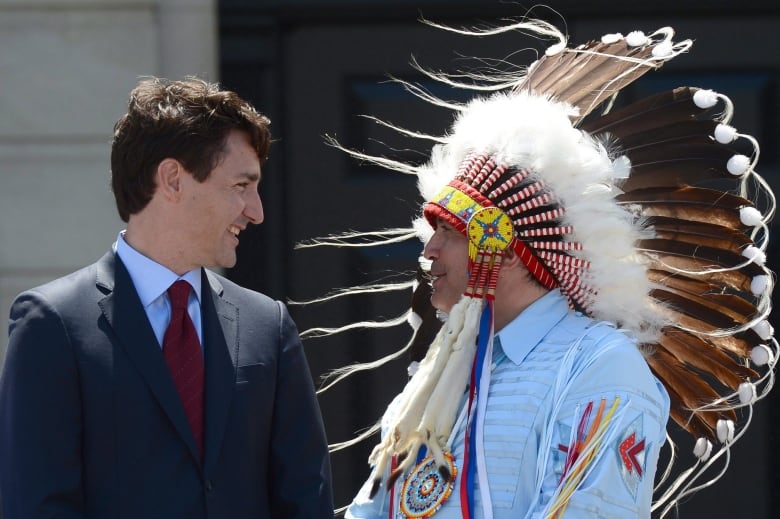 Prime Minister Justin Trudeau (left) has made reconciliation a priority for his government. Assembly of First Nations National Chief Perry Bellegarde stands next to him (right) during National Indigenous Peoples Day celebrations in Ottawa in 2017. (Sean Kilpatrick/Canadian Press)

Bennett’s office said in a statement that Ottawa remains “committed to righting past wrongs, especially those involving children outside of litigation” and that they continue to work with the lawyers for day scholars.

“As those discussions are confidential, we will not be commenting on the nature of discussions.”

Lawyer John Phillips, a partner with firm Waddell Phillips who is representing the day scholars, said the case is awaiting the appointment of a new case management judge which would then lead to the scheduling on how the matter would proceed to litigation.

Phillips said Harrington’s ruling called out Canada for not following Wilson-Raybould’s litigation directive in the case.

“It’s pretty clear he sees Canada as having utterly failed to meet either the spirit or the letter of the litigation guidelines that were promulgated by the Department of Justice,” said Phillips.

“It fails on the level of both reconciliation and compliance with their own internal directions.”

Phillips also said Canada’s continued adherence to its denial that it had no residential school policy flew in the face of the 2008 apology for residential schools delivered by former prime minister Stephen Harper and Ottawa’s recent settlement with day school survivors.

Ottawa also denies in its statement of defence that it breached the Aboriginal rights outlined in section 35 of the Constitution of any of the plaintiffs to speak their traditional languages, engage in traditional customs or follow their traditional governance.

“What Canada is throwing back at the Aboriginal people of Canada is … that you have to tell us what your culture was, you have to specifically define the parameters … and why language was important,” said Phillips.

“As if those aren’t self evident.” 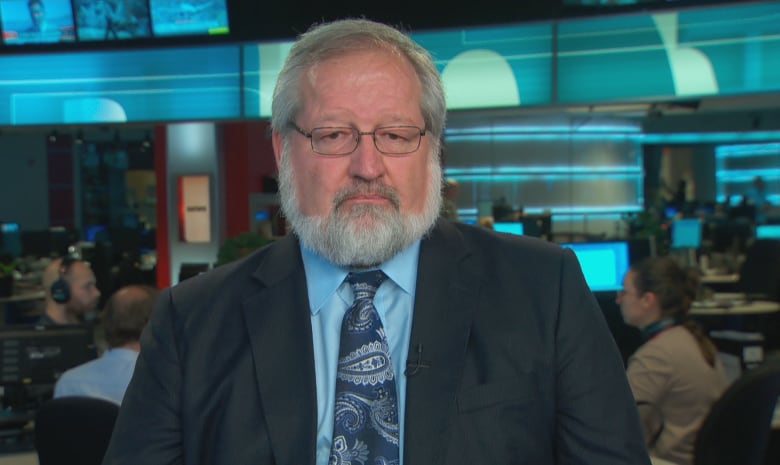 Lawyer John Phillips says Ottawa is not living up to its reconciliation talk on the day scholars class action lawsuit. (CBC)

Harrington, who is retiring at the end of the month, ended his ruling with a quote from French philosopher Albert Camus: “I shall tell you a great secret, my friend. Do not wait for the last judgment, it takes place every day.”

Phillips said Harrington quoted Camus to make a point that the country is watching to see if there is a reality to the current government’s claimed commitment to reconciliation.

“And that is a judgment that is made every day,” he said.