Almost six decades after attending residential school, Norman James Hall is his honouring his Nuxalk heritage through art — in a very public way.

Six of 64-year-old Hall’s paintings now hang on the walls at the Vancouver Public Library. The large canvas paintings, located in the library square promenade, are colourful portraits of Nuxalk chiefs related to Hall’s family, and Indigenous artists that have inspired his work.

The exhibit is called “The Chiefs and Nobles” and is part of Vancouver’s City of Reconciliation art program.

“I still look up there and I can’t really believe that is my stuff. The joy hasn’t really sunk in yet,”  Hall told CBC reporter Angela Sterritt.

Hall’s project manager Kazuho Yamamoto first saw Hall’s work while she was volunteering in the arts program at the Carnegie Community Centre in Vancouver’s Downtown Eastside.

She was blown away by his talent.

“I felt like his powerful visual language should be heard outside of the Downtown Eastside area,” Yamamoto said.

Yamamoto saw the City of Vancouver was commissioning work from Indigenous artists, but despite her encouragement, Hall wasn’t sure he could meet the city’s two-month deadline. His paintings normally take two to three years to complete. 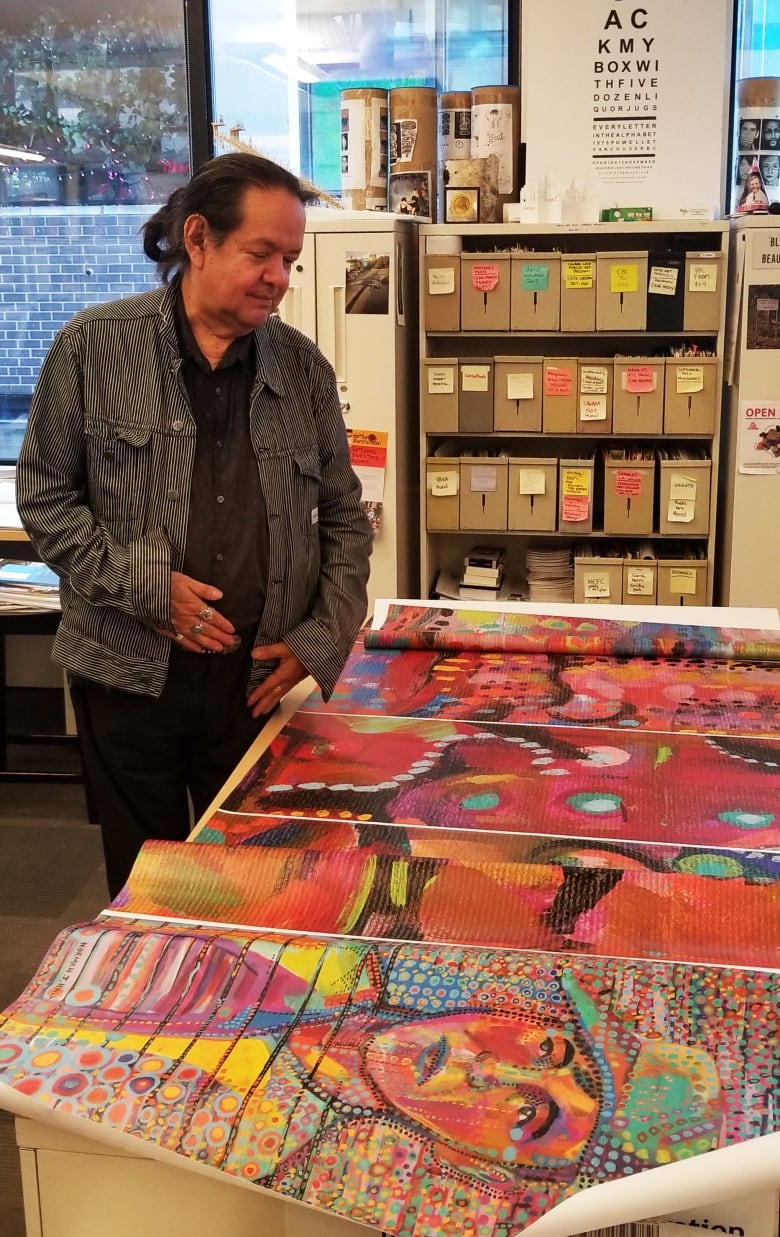 ‘I was brave and desperate’

Hall struggles with post-traumatic stress disorder, partly because of his experiences at residential school.

As a child, Hall was taken from his Nuxalk Bella Coola community to the Port Alberni residential school. His experience was filled with trauma and abuse by both priests and students, he says.

One day, when he was a teenager, Hall made a run for it.

“I looked across the river and stared at that residential school. I froze and said, ‘I can’t go back there’ … So in the spur of the moment I turned around and walked the other way, not knowing where I was going to go, what I was going to eat or where to sleep. I was brave and desperate.”

Homeless and looking for family, Hall hitchhiked and ended up in the Downtown Eastside. He has mostly stayed there ever since. Hall says he can now express himself and his ancestors through his art.

“They’re up there because I thought about them,” he said of the portraits hanging at the library.

“I thought about how hard they worked…. They understood their culture and where they came from. That’s why they worked hard.”

Listen to the full story here:

Norman James Hall suffered years of abuse at the Port Alberni residential school and now suffers from post-traumatic stress disorder. But Hall pushed through the pain and is now part of the City of Vancouver’s Indigenous mural program. 6:34

With files from Angela Sterritt and The Early Edition.