What did turtles look like before they had shells?

Part of the answer has been found in the form of a nearly complete, beautifully preserved fossil unearthed in China. It’s a reptile bigger than a human, with ribs flattened into a disc-shaped body but no carapace and only the beginnings of a turtle-like beak.

The newly discovered early turtle “unfolds the early history of turtles one step,” said Xiao-Chun Wu, a paleobiologist and research scientist at the Canadian Museum of Nature, who co-authored a new study describing the fossil with colleagues from China, the U.S. and the U.K. It was published this week in the journal Nature.

The study was supported by the Institute of Vertebrate Paleontology and Paleoanthropology, the Chinese Academy of Sciences, National Museums Scotland, the Field Museum and the Canadian Museum of Nature.

Eorhynchochelys sinensis, which means “dawn-beaked turtle from China,” lived about 228 million years ago, during the Triassic, a period when marine reptiles like crocodiles, ichthyosaurs and relatives of plesiosaurs were terrors of the sea.

The early turtle was about 2.5 metres in length with a very long tail, and probably lived near shorelines and the mouths of rivers, Wu said. Its broad ribs, flattened, turtle-like shape and strong limbs were adapted for digging in the mud to bury its eggs or forage for food on the bottom of shallow waters near the shore, or to simply bury itself underground for safety.

It’s the earliest turtle fossil ever found with any sign of a turtle-like beak, although that makes up only the front half of its mouth — the back was full of teeth that modern turtles don’t have.

Wu said the animal probably ate fish or whatever else it could get.

The early turtle was about 2.5 metres long, with broad, flattened ribs that gave it a turtle-like shape and a very long tail. It probably lived near shorelines and the mouths of rivers. (IVPP)

Interestingly, the team previously found a turtle at the same site in 2008 that had lived eight million years later, and had a half shell covering its belly, but no shell on its back. That turtle also had no sign of a beak.

Steps forward and back

A comparison of the new fossil to other early turtle fossils suggests that some features, like the beak, may have evolved, disappeared and reappeared before turtles arrived at a body plan that worked.

That structure makes them extremely different from other reptiles, but it has changed very little in more than 200 million years, Wu said.

That unusual body structure, along with the fact that turtle fossils are extremely rare, has made the path of turtle evolution a big puzzle. The new fossil has features in its skull and ribs that fill in the gaps.

“It is important because it’s an intermediate step in the evolution of the turtle body plan,” said Olivier Rieppel, curator of evolutionary biology at the Field Museum in Chicago and a co-author of the paper. He said he was “absolutely stunned” when he first saw pictures of the new fossil.

Still, analyzing it wasn’t simple, because of its mix of modern and primitive features.

“It’s coming together, but not in a straight line,” Rieppel said.

The new turtle fossil was found by a farmer in Guizhou Province in China in 2015, at a quarry where Wu and the other authors had been digging fossils, with the help of locals, since the 1990s. After Wu and his team left, they asked local farmers to keep looking for fossils. Some of the finds were set aside to become part of the new Sanya Museum of Marine Paleontology under construction in Hainan Province.

Chun Li, a paleontologist with the Chinese Academy of Sciences in Beijing and lead author of the new paper, was going through those fossils when he spotted what he thought to be a fossilized turtle. That’s when Li got in touch with Wu, who was his former professor. 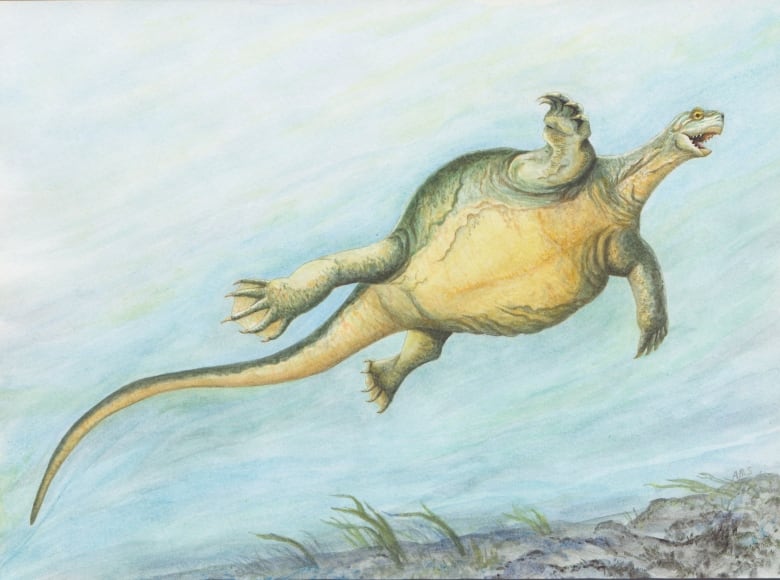 Eorhynchochelys is the earliest turtle fossil found thus far with any sign of a turtle-like beak, although it makes up only the front half of its mouth — the back was full of teeth that modern turtles don’t have. (Adrienne Stroup/Field Museum)

Wu said that while very early turtle fossils are rare and none have ever been found in Canada, there are marine sediments from the Triassic in the Peace River and Wapta Lake regions of B.C., where it might be possible to dig some up.

Darla Zelenitsky, a paleontologist at the University of Calgary who found a fossilized pregnant turtle in Alberta a decade ago, called the new discovery, an “interesting and unexpected” one.

It shows the evolution of turtles may have been more complicated than previously thought, with some features disappearing and then reappearing, she added.

“That said, with so few fossils known for early turtles and the uniqueness of these animals,” she wrote in an email, “our understanding of their early evolution can be challenged or even overturned with each new discovery.”

Tiago Simoes, a University of Alberta researcher who recently published a detailed evolutionary tree for reptiles, said using that new information may have helped the researchers place the new discovery more precisely on the tree of life.

Simoes added that the study provides “important new insights into the evolution of the turtle body plan” and how turtles relate to other reptiles.