The blaze remains entirely in Glacier National Park, which is on the U.S. side of the border.

The superintendent of Waterton Lakes National Park has granted authority for the American incident command team to operate on the Canadian side of the border, and they are working closely with Parks Canada staff, said spokesman John Stoesser in an update Sunday.

Two Parks Canada helicopters were being used Sunday morning to bucket water on a small spot fire on the south side of Boundary Creek, with U.S. National Park Service personnel monitoring the fire from the ground.

Fire managers will use the terrain of the area — and avalanche slide path and the creek — as a natural fire break in hopes of slowing the spread of the fire.

A map showing the size of the Boundary wildfire, which is threatening Waterton Lakes National Park. (Parks Canada)

If weather conditions allow, crews will bucket water on the edges of the fire and use back burning — lighting a smaller fire ahead of the main blaze to eliminate fuel — to help contain it.

Sunday’s forecast calls for light showers in the afternoon with potential for 10 to 20 millimetres of rain by Monday.

Winds from the southwest are also expected ahead of the rain.

Waterton Lakes National Park is closed because of the approaching fire, however businesses in the townsite remain open. 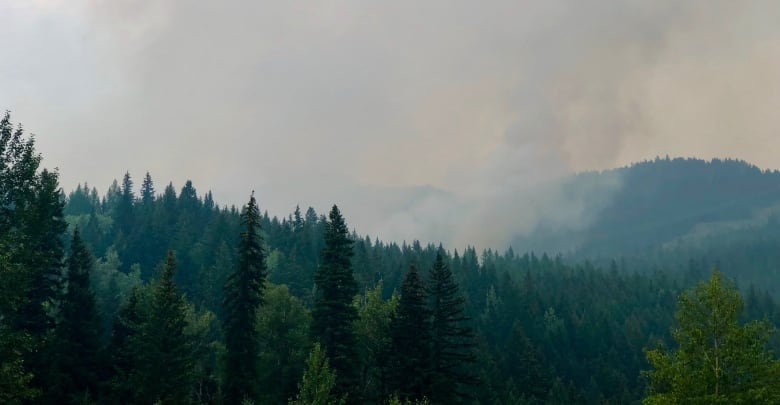 A wildfire burns just off Highway 3, near Sparwood B.C., Sunday. The small wildfire, which was sparked by lighting, has been burning for more than a week. (Brooks DeCillia/CBC)

Another air quality statement was issued for most of southwestern Alberta, warning smoke from B.C. wildfires could reduce air quality.

In Calgary, the air quality health index was expected to rise to 7 — high risk — by Sunday evening.

Hundreds of wildfires continue to burn across B.C. More than 945,000 hectares have been scorched in that province since April 1.

With a file from CBC British Columbia