A plan for expanding Edmonton’s downtown bike network south of the river is drawing criticism from cyclists who regularly ride through the Garneau and Strathcona neighbourhoods.

In a report going to council’s urban planning committee Tuesday, city staff propose protected bike lanes for 110th Street, and not 109th Street — the popular option in a 2016 survey of area residents — to connect cyclists with the High Level Bridge.

“Roadways that would experience significant operational traffic impacts with the addition of bike routes were removed from consideration,” the report states.

“The 109 Street corridor was considered as a candidate bike route, but was removed due to its importance for transit and motor vehicles.”

Mike Cotfas, the owner of Mike’s Bikes and Beans on Whyte Avenue, is frustrated that the city seems to be prioritizing drivers over cyclists in the design of a bike network.

“I think they’re really trying to make drivers happy first and foremost, and then cyclists second, offering a concession of 110th instead of 109th,” Cotfas said.

The report says the expansion to the south side of the river takes into consideration learnings from the downtown bike network, city standards for street design and national guidelines.

The south-side network would have protected bike lanes in Garneau and Strathcona.

There are already some protected bike lanes in the area. Cotfas and other cyclists have positive reviews of the lane along 83rd Avenue between 99th and 106th streets and is currently being extended to 111th Street. There’s another on 106th Street and another on 76th Avenue.

The south side bike grid recommended by city staff. (City of Edmonton)

The south side bike network would add a lane on 110th Street, with a link along 88th Avenue to the High Level Bridge, as well another lane on 100th Street between Whyte Avenue and Saskatchewan Drive to connect to the Low Level Bridge.

There would be an east/west route along 87th and 86th avenues between 97th and 106th streets.

Holyrood resident Dave Sutherland, who has been cycling in the area for years, wrote a letter to the city with concerns about the proposed south side bike network.

“It’s kind of squandering an opportunity here to improve transportation access to an area that’s planned to be intensified and made more walkable and accessible,” Sutherland told CBC News, referring to Envision 109, a long-term improvement project for the 109th Street corridor.

According to a presentation document from an Envision 109 open house that year, with main streets, the city will aim to “prioritize moving people, not just motor vehicles” and “enhance and rebalance the environment for pedestrians, cyclists and transit users.” 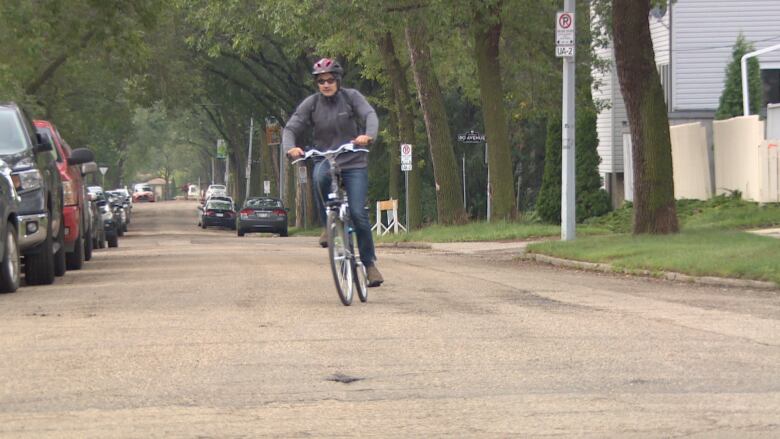 A cyclist swerves to avoid a pot hole on 110th Street. (Rod Maldaner/CBC)

Cotfas said the current condition of 110th Street is discouraging.

“I challenge anybody to take a picture of a 10-foot stretch that doesn’t have a pothole or a major crack in the road,” Cotfas said. “It’s virtually unusable in its current state.”

Cotfas said while riding over the High Level Bridge and down the corridor recently, he worried he could get into a traffic accident.

“Something magical happened the second I got on to the bike lane on 83rd [Avenue],” Cotfas said. “That risk of something terrible happening to me dropped to zero per cent.”

Sutherland said while the wide lanes on 109th Street create more room on the road, there is also more speeding and more distracted driving.

“Right now, it’s not a good experience,” Sutherland said of cycling on 109th Street. “At the same time, it’s a corridor that has so much potential.”

Should council endorse the south side bike network, city administration recommend implementing it over the next four years, in concert with the Garneau and Strathcona neighbourhood renewal projects.