Three people are in custody after a high-speed chase during rush hour on Wayne Gretzky Drive Wednesday.

Police got a call about the driver of a white Kia Soul firing a gun at a black truck near Hermitage Road and Hooke Road at about 5:20 p.m., Insp. Erik Johnson said.

When police approached the Kia Soul, it fled, reaching speeds up to 120 kilometres per hour and crashing into a number of vehicles.

“Due to the risk to the public with there being a firearm and one having already been shot, our members engaged in a criminal flight response which wound its way through downtown division, northwest division and northeast division,” Johnson said, noting about 15 police cars were involved in the chase.

A police vehicle crashed into the Kia Soul, ending the chase. (Anna McMillan/CBC)

The chase ended on Wayne Gretzky Drive and 101st Avenue after the Kia Soul tried to squeeze between two cars stopped at a red light, damaging both vehicles, Johnson said. At that point, a police car deliberately crashed into the suspect vehicle, pushing it into a curb and snapping off a front tire.

Two men and a woman were arrested without incident. The driver was taken to hospital for precautionary reasons, as he was complaining about “general soreness,” Johnson said.

Police are still looking for the black truck.

“We’ve checked the hospitals and whatnot but we don’t have a complainant in the black truck yet,” Johnson said.

Amara Sajjad and her son were in one of the vehicles struck by the Kia Soul on 101st Avenue.

She said they were hit hard, and the back end of their car was damaged.

“I was so scared and my heart rate was so fast,” Sajjad said. “And now I’m feeling pain in my back.” 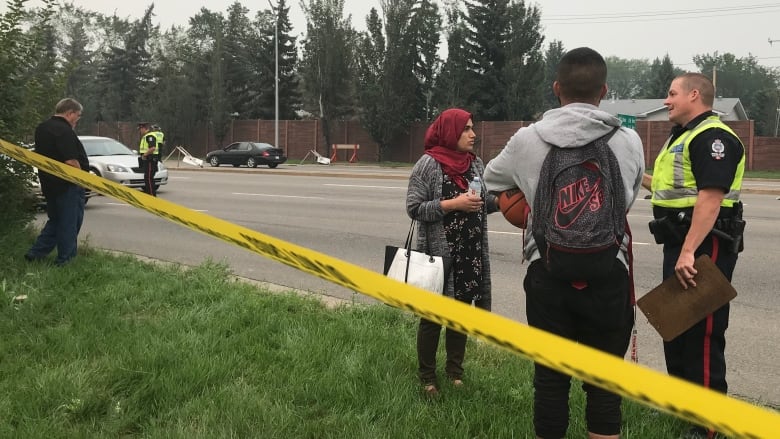 Amara Sajjad (centre) and her son were in one of the cars hit by the suspect vehicle. (Anna McMillan/CBC)

Ali Jomaa was standing beside his vehicle on 78th Street and 118th Avenue when the Kia Soul — and a parade of police cars — flew past him. He said he jumped in his car and followed them.

“I thought it was like a movie,” Jomaa said. “I like watching police because when I was young, I always watched cop shows and I know lots of cops in the north division — friends of mine. So every time I see action, I always follow them.”

Wayne Gretzky Drive from 101st to 112th Avenue was closed for several hours.