As the Dene Nation converges in the N.W.T.’s West Point First Nation this week to select a new leader, the organization is contemplating its history — and facing an uncertain future.

This Wednesday, the election of a new chief will cap three decades during which the mandate of the 49-year-old organization has often been in flux. Longtime chief Bill Erasmus, who first assumed the position 30 years ago, has decided to step down, paving the way for new leadership.

To critics, the Dene Nation lost its purpose with the failure of a comprehensive land claim agreement in the late 1980s. But for others, like the three candidates running to replace Erasmus as national chief, it is a reason to convene five diverse regions, each growing more independent of each other as their own land claims processes reach their conclusion.

Now, on the verge of a new era, the Dene Nation will bring together representatives of all five regional governments — the Gwich’in, Sahtu, Dehcho, Tlicho and Akaitcho — and Dene from outside the N.W.T. to usher in the latest chapter in the organization’s long history.

Dene National Chief George Erasmus (second from left) at the Dene National Assembly in 1978. Erasmus became chief as the Indian Brotherhood became the Dene Nation and oversaw the beginning of land claim negotiations with the federal government. (Fumoleau/NWT Archives/N-1995-002-1590)

The Dene Nation traces its origins to the 1969 White Paper, one of the most controversial government proposals in the nation’s history. 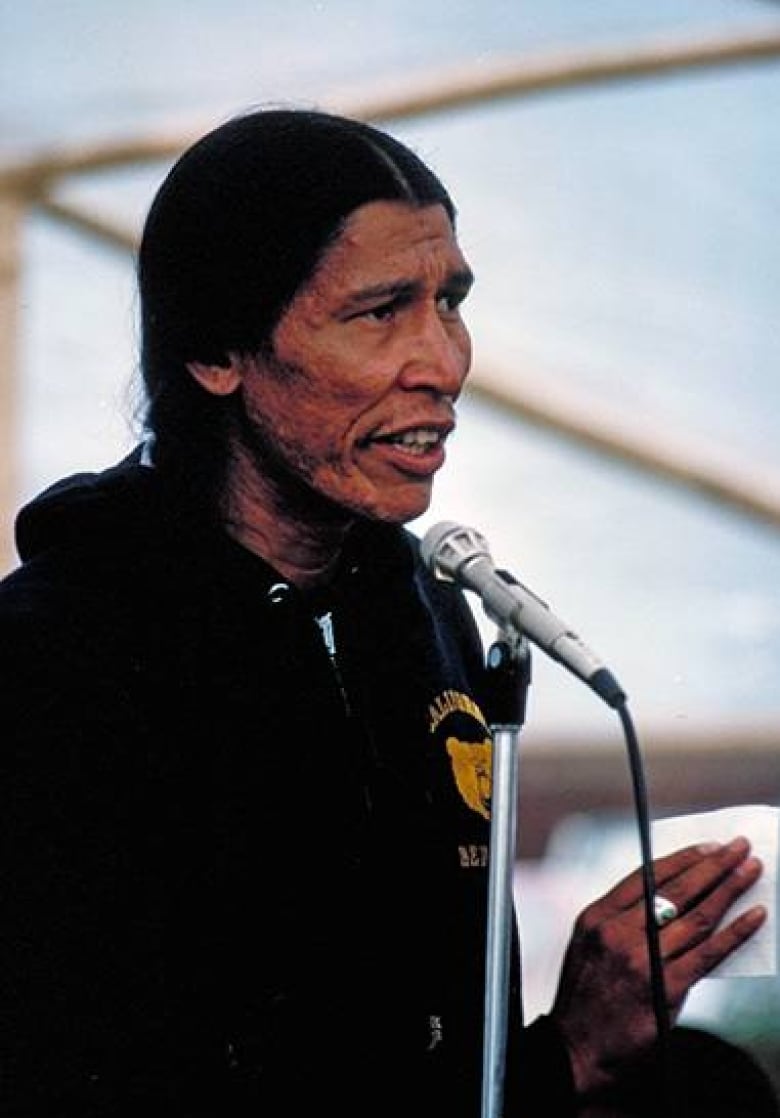 Francois Paulette speaks at the 1978 Dene National Assembly. Five years earlier, Paulette sued Canada for legal title over lands in the N.W.T. in a case later known as the “Paulette caveat.” (Fumoleau/NWT Archives/N-1995-002-1627)

“It was asking… treaty First Nations across the country to dissolve the band councils, dissolve their Indian reserves, dissolve their identity and culture and just become mainstream society,” said Francois Paulette, a founding member of the Indian Brotherhood of the Northwest Territories, the precursor to the Dene Nation.

In response, Paulette says, elders, chiefs, and a small group of young and vocal Dene leaders came together to form the Indian Brotherhood.

Advocacy by Indigenous groups across the country led to the withdrawal of the White Paper one year later, in 1970.

But the Indian Brotherhood’s mandate to defend the treaties in the North ignited a longstanding debate about the government’s written versions of Treaty 8 and 11, which govern Dene territory.

There were major discrepancies between the understanding of the agreements held by Dene signatories and the written versions held by the government of Canada, which claimed the Dene had ceded their territory to the Crown.

The Paulette caveat and the Berger Inquiry

That discrepancy came to a head with the planned construction of the Mackenzie Valley Gas Pipeline in 1970.

The pipeline faced immediate opposition from Dene communities in the Mackenzie Valley, who were concerned that their resource rights would be violated, according to Bill Erasmus.

“Someone wanted to extract our resources and bring them to the South,” said Erasmus. “It was not in our interest to support something that would benefit others and not our people.”

An angry Dene chief tells the inquiry he will lay down his life to stop the pipeline. 5:46

In the Supreme Court of the Northwest Territories, the case fell to Justice William Morrow. Morrow travelled communities in the claim area to compare the written treaty with oral accounts of signatories in the region.

“That’s perhaps the first and the last time that’s ever been done,” said Paulette.

In the fall of 1973, Morrow ruled that the Dene had never surrendered rights to the territory. The government appealed to the Supreme Court of Canada, where the ruling was overturned on a technicality, saying caveats could not apply to the type of Crown land in question.

The following year, the federal government commissioned Justice Thomas Berger to investigate the impacts of the proposed pipeline.

His recommendation that land claims be settled before construction could begin delayed the pipeline, which did not get approval until more than 30 years later.

Georges Erasmus debates the importance of self-rule for native peoples. 9:48

The victory over the pipeline propelled the Indian Brotherhood forward to push for Dene self-government. 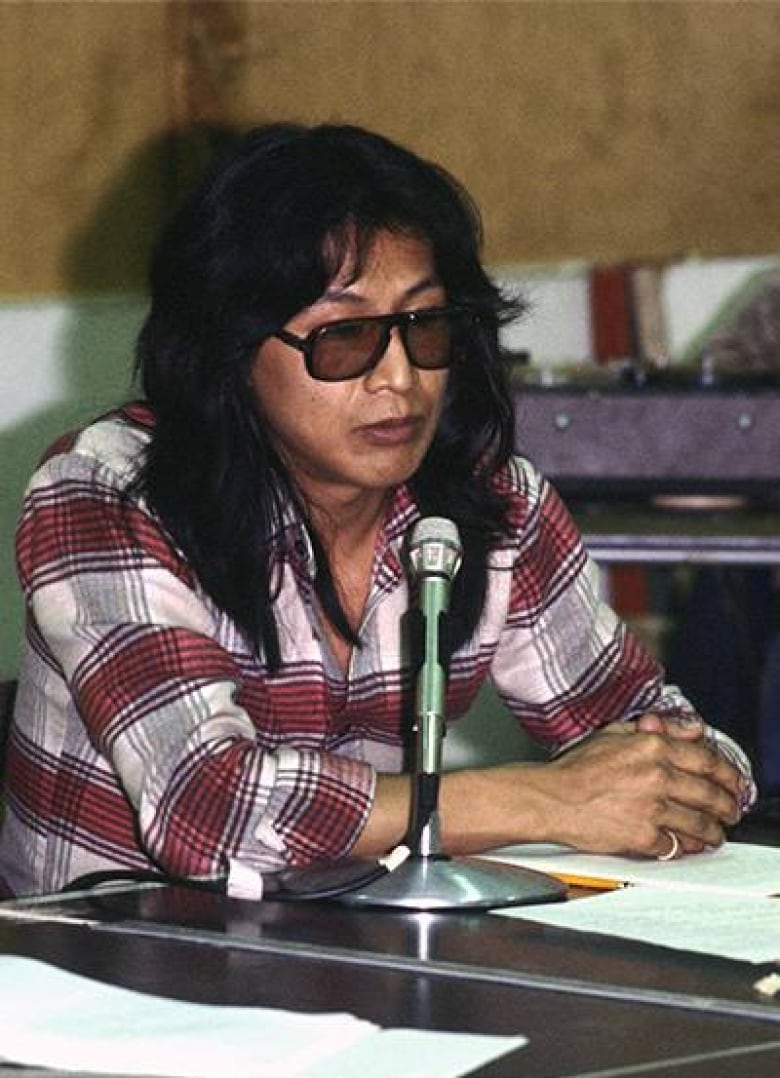 Stephen Kakfwi at the 1978 Dene National Assembly. Kakfwi, a former national chief, says the Dene Nation has “basically done nothing” since he left the role in 1987. (Fumoleau/NWT Archives/N-1995-002-0506)

In 1976, the Indian Brotherhood published the Dene Declaration, which identified the Dene as a nation for the first time.

“We, the Dene of the Northwest Territories, insist on the right to be regarded by ourselves and the world as a nation,” the declaration read.

“Colonialism and imperialism are now dead or dying… [but] nowhere in the New World have Native Peoples won the right to self-determination.”

“There was no blueprint for what we were doing…. Canada didn’t know what to do with us,” said Stephen Kakfwi, who was Dene national chief from 1983 to 1987.

“They at first ridiculed us and said we were all neophyte socialists.”

In 1978, the Indian Brotherhood changed its name to the Dene Nation. Three years later, they entered into negotiations for a comprehensive land claim and self-government agreement with the government of Canada.

For almost 10 years, the Dene Nation negotiated with the federal government for an agreement that would cover all Dene lands.

But behind the discussions, the political landscape was shifting.

Gwich’in and Sahtu regional governments were eager to strike a deal to get ahead of proposed resource developments in the oil-rich territory, according to Kakfwi.

The Dehcho and Akaitcho, meanwhile, were content to draw out the process and pursue a better settlement that would include self-government. 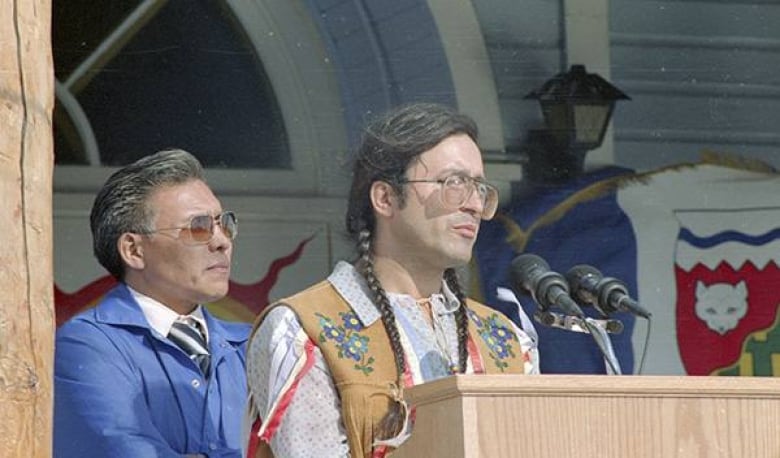 Bill Erasmus at the signing of the 1988 agreement-in-principle for a comprehensive Dene-Métis comprehensive agreement. The agreement would fall apart two years later. (Fumoleau/NWT Archives/N-1998-051-3948)

In 1990, the Oka Crisis in Quebec formed the backdrop to the signing of a Dene-Métis Comprehensive Agreement.

But the final version still needed to be approved by delegates from all five regions at the Dene National Assembly — and there were issues with the draft.

The federal government now said the new agreement would replace Treaties 8 and 11, the very documents the Dene Nation was founded to protect — including clauses that had nothing to do with land or resource rights, but instead affirmed the Dene’s status as treaty people.

In a resolution at the assembly, delegates asserted the continued recognition of the original treaties, saying this new agreement would add to them, but not replace them.

In response, the government of Canada ended negotiations with the Dene Nation. From then on, Canada would only negotiate with regional governments.

“That was the beginning of the downfall, as I saw it at the time, of the great Dene Nation,” said Paulette.

The Sahtu Dene and Gwich’in regional governments began their own negotiations with the federal government.

“Bill Erasmus at that time famously said, ‘don’t worry about [the Sahtu and the Gwich’in], they’ll be back, they’ve got nowhere to go,'” said Kakfwi. “They never came back.”

Within three years, Canada had signed comprehensive agreements with both regional governments. Neither included the right to self-government.

Watch: Bill Erasmus and Gary Bohnet of the N.W.T. Métis Nation speak before the signing of a comprehensive land claim agreement. The agreement failed to win approval from the assembly of chiefs. 0:36

In the era of regional agreements, the Dene Nation has struggled to find a purpose, according to Kakfwi.

“It’s been largely decapitated… two, now three regions, have no need for it,” said Kakfwi. “The Dene Nation has basically done nothing since 1987.”

With the signing of the Tlicho Land Claims and Self-Government Agreement in 2003, all but the Dehcho and Akaitcho regions have renewed agreements with the government of Canada.

Erasmus says the move to regional negotiations “changed the Dene Nation… [into] a primarily political organization.”

The purpose, he says, is “to help coordinate, to help open doors, to advocate… bringing our First Nation governments together under one roof.”

“The single most important thing we do, to stay united, is to fight for the recognition of our rights as a nation, and that means our own government,” said Kakfwi.