Renegotiating an international trade deal is apparently easier than operating a speakerphone.

Donald Trump’sbig announcement of a revamped free trade pact with Mexico began inauspiciously this morning, as the U.S. president fumbled with his desk phone for more than a minute while camera shutters clicked, and television networks transmitted the uncomfortable scene live.

President Trump’s announcement of the latest developments in the NAFTA negotiations with Mexico on Monday was short on specifics, but the fuzziest bit is Canada’s place in a trilateral trade deal that has been renegotiated by just two of the parties. (Judi Bottoni/Associated Press)

When he was finally connected with Mexican President Enrique Pena Nieto, Trump was long on superlatives and praise for the new deal, promising it will be “very special” for American farmers and manufacturers.

But apart from a pledge to give NAFTA an “elegant” new name — Trump suggested the “U.S.-Mexico Trade Agreement” — the president was rather short on specifics.

Several media outlets are reporting that the biggest change will come in the automotive sector, with car companies having to make 75 per cent of a vehicle’s value in North America — up from 62.5 per cent — to move across the border tariff-free. The agreement also calls for the use of more domestically produced steel and aluminum, and stipulates that a certain percentage of parts must come from higher-wage factories. 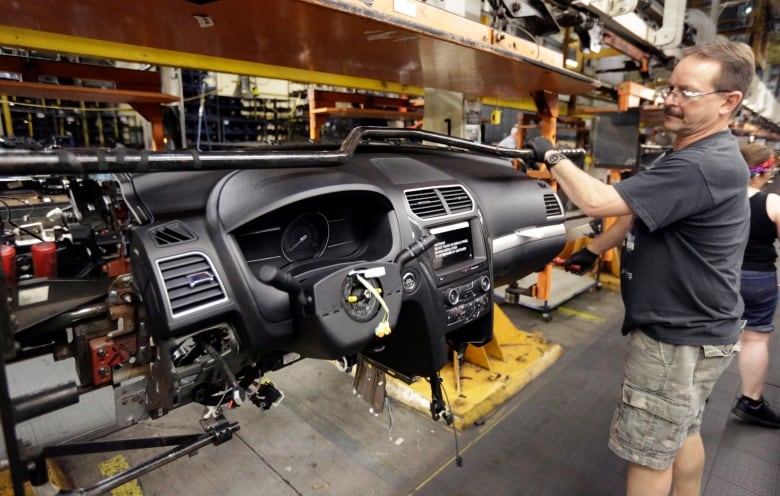 The fuzziest bit, however, is Canada’s place in a trilateral trade deal that has been renegotiated by just two of the parties.

In his Oval Office remarks, Trump suggested that he is indifferent as to whether Canada signs on, talking about how much money the U.S. could make from a tariff on Canadian-produced cars, and again referencing Ottawa’s “300 per cent” duty on U.S. dairy products.

But Pena Nieto had already reached out to Prime Minister Justin Trudeau to ask that Canada rejoin the U.S. and Mexico in talks this week, and he reiterated that request to Trump in this morning’s conference call.

“It is our wish, Mr. President, that now Canada will also be able to be incorporated in all this,” Pena Nieto said via a translator. 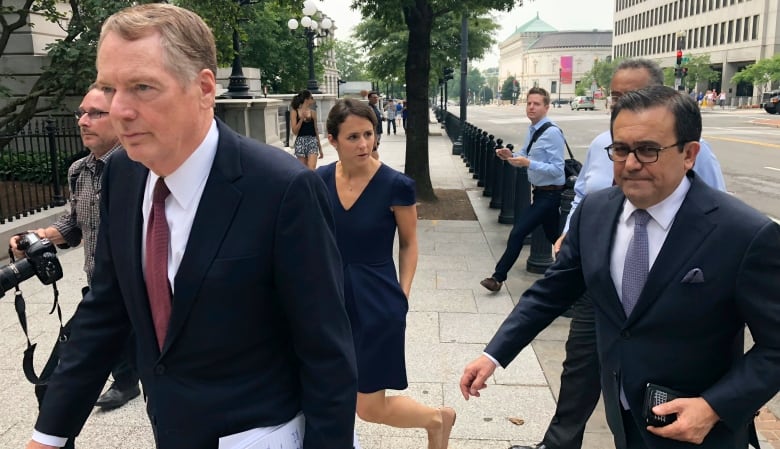 And what has become clear over the past two months is that Trump needs Mexico’s goodwill, as he desperately searches for a win on the trade front heading into the U.S. midterms this fall.

Trump’s habitually harsh language about his southern neighbour — “Mexico is doing nothing for us except taking our money and sending us drugs,” the president said during a June 21 cabinet meeting — has been replaced with tweets about fair deals and the “absolute gentleman” on the other side of the table.

“For some time now, he [Trump] has been very prudent in referring to Mexicans, or he hasn’t said offensive things,” he said late last week. “I have to thank him for that …. Up to now, things are going well. There has been respect.” 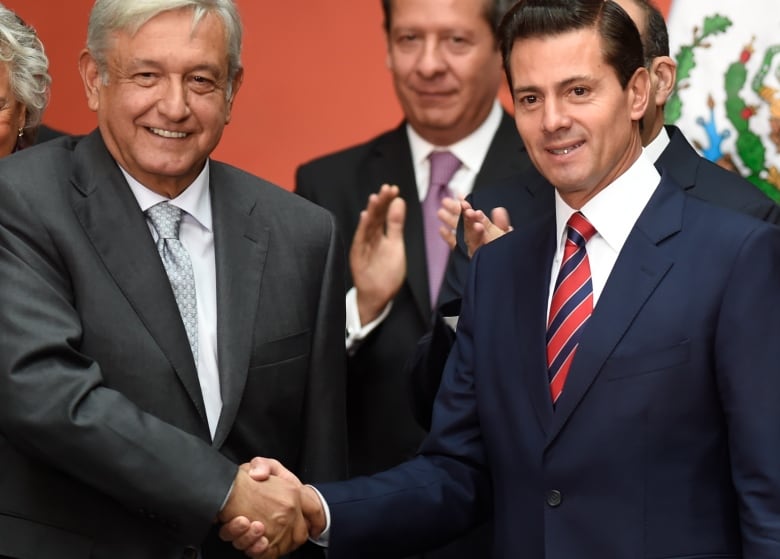 And keeping AMLO, as he is known, happy will be crucial going forward.

Even if the renegotiated Mexico deal is finalized this week — and there remain significant questions about the energy sector — the timing will be tight for getting it through the U.S. Congress and signed before Pena Nieto leaves office on Dec. 1. And it is the leftist AMLO’s party that now controls the Mexican senate, which must ratify the agreement.

Ottawa must also sign off — at least if the side deal is to become part of NAFTA.

All of which suggests that Trump may soon have to start saying nice things about Canadians, too.

As new U.S. sanctions begin to bite, Iran’s government is fighting back on multiple fronts, launching a legal challenge, pressuring European powers to offset the economic costs, and threatening to shut American warships out of the Persian Gulf.

This morning, Iran went to the International Court of Justice in the Hague to request an emergency order lifting the Trump administration’s new sanctions on the basis that they violate a dusty and long-forgotten 1955 treaty of “friendship and economic cooperation.”

Iranian representative Mohsen Mohebi, left, gestures during the opening of the case between Iran and the United States on Monday at the The International Court of Justice (ICJ) in the Hague. (Jerry Lampen/AFP/Getty Images)

Iran’s economy has taken a significant hit since the U.S. President pulled out of the international deal limiting Tehran’s nuclear program in May, and began to reimpose sanctions earlier this month. The Iranian rial has lost half its value against the U.S. dollar, while inflation and unemployment are soaring. Multinationals like Total, KLM and British Airways are pulling out of the country for fear of American reprisals.

Iranian President Hassan Rouhani is asking those who remain party to the nuclear deal — France, the U.K., Russia, China and the EU — to help cushion the blow.

In a phone call with France’s Emmanuel Macron today, Rouhani asked for European guarantees that Iran will be able to continue exporting oil, accessing the international banking system, and maintain air travel links.

“Iran has acted upon all its promises in the nuclear agreement and, with attention to the one-sided withdrawal of America … expects the remaining partners to operate their programs more quickly and transparently,” Rouhani said, according to a state news agency. 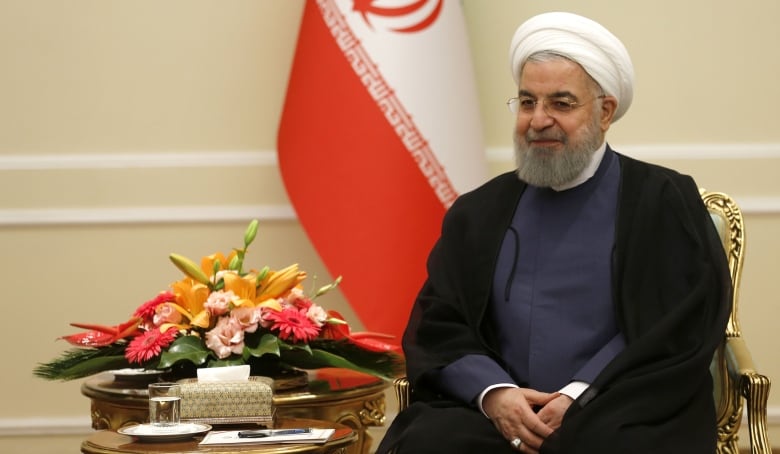 Iranian President Hassan Rouhani is set to appear before Iran’s parliament tomorrow to answer questions about his government’s handling of the sanctions crisis. (Atta Kenare/AFP/Getty Images)

The diplomatic overtures were accompanied by some bellicose talk.

The new head of Iran’s Navy told reporters that U.S. Navy ships don’t belong in the Persian Gulf, noting that Tehran has full control of the Strait of Hormuz — a not-so-subtle threat to close access to the Gulf.

“The Persian Gulf is our home, so we can ensure the security of the Persian Gulf and there is no need for the presence of aliens like the U.S. and the countries whose home is not in here,” said Rear Admiral Ali Reza Tangsiri, commander of the Islamic Revolution Guards Corps Navy.

Iran is also suggesting that it will seek an increased role in Syria, pledging to fully engage in the rebuilding of the country after its seven-year civil war, and continue its military and financial support of Bashar al-Assad’s regime.

The external push against the sanctions comes at a time of turmoil for Rouhani’s government.

On Sunday, members of Iran’s parliament voted to impeach his finance minister over his handling of the U.S. sanctions and the plunging rial.

Iran’s outgoing finance minister Masoud Karbasian speaks during his impeachment hearing in a session of parliament in Tehran on Sunday. (Vahid Salemi/Associated Press)

This is the second minister Rouhani has lost in such a fashion this month, as conservative factions take advantage of widespread public anger.

Rouhani himself is set to appear before parliament tomorrow to answer questions about his government’s handling of the crisis.

“We have got to change. We’ve got to really stop and say to ourselves, ‘There’s something wrong. Why are young men willing to give up their life, or why don’t they value somebody else’s life?’ We’ve got to figure this out.”

– Florida Gov. Rick Scottafter yet another mass shooting in his state, this time at a Jacksonville video game tournament, left three dead including the shooter, and wounded 11. 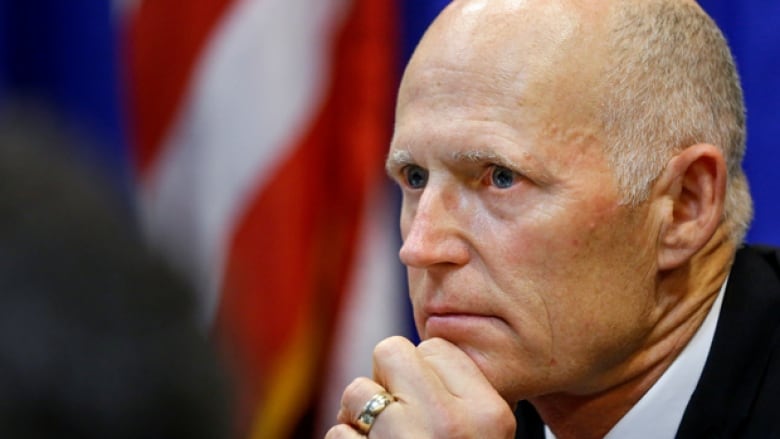 Aug. 27,1978: Sneakers fly off the shelves as running becomes popular

The idea of adults running when they weren’t being chased was difficult to fathom in 1978. “Runners live in their own world,” The National’s Russ Patrick pronounces, listing their $1 lemonades, books and Perrier as proof. The average Canadian jogger was spending $100 a year on tube socks, Adidas shorts, headbands and imported shoes that could run up to $60 a pair. Blame Hollywood, as “just about every movie” seemed to feature a running scene.

Stores are having trouble keeping shoes in stock after running becomes a popular new sport in 1978. 2:48