Police searched on Monday for a motive in the third mass shooting in Florida in two years, which left two people dead and 11 wounded in Jacksonville, before the gunman killed himself at a video game tournament.

Witnesses told local media that the gunman, identified by police as David Katz, 24, of Baltimore, was a disgruntled gamer, angry because he lost Sunday’s tournament.

Police gather in Jacksonville Landing in Jacksonville, following the mass shooting Sunday, which killed two people, before the gunman took his own life. (Laura Heald/Associated Press)

It was not clear if he knew his victims. While police have not identified the victims, family members told Jacksonville CBS television station WJAX that the two people killed were Eli Clayton and Taylor Robertson, both video game contestants.

The Jacksonville Sheriff’s office said 11 other people were wounded by gunfire and at least two others were injured while fleeing the scene of Sunday’s shooting.

Police say Katz killed himself and his body was found near the bodies of two shot dead at The Landing, a popular riverside shopping and restaurant spot in Jacksonville.

The shooting took place during a regional qualifier for the Madden 19 online game tournament at the GLHF Game Bar inside a pizza restaurant, according to the venue’s website.

The winners of the contest go forward to the video game finals in Las Vegas and compete for $165,000 US.

The latest rampage occurred amid a debate over U.S. gun laws that was given fresh impetus by the massacre in February of 17 people at a high school in Parkland, Fla. Two years ago a gunman killed 49 people at the Pulse nightclub in Orlando.

U.S. President Donald Trump has been briefed and is monitoring the situation in Jacksonville, the White House said.

The bar was livestreaming a football video game competition when the gunfire started, according to video shared on social media.

In the video, players can be seen reacting to the shots and cries can be heard before the footage cuts off.

Taylor Poindexter and her boyfriend, Marquis Williams, had travelled from Chicago to attend the tournament, and they fled when the gunfire erupted. She said she saw Katz take aim at his victims.

“We did see him, two hands on the gun, walking back, just popping rounds,” Poindexter told reporters. “I was scared for my life and my boyfriend’s.” 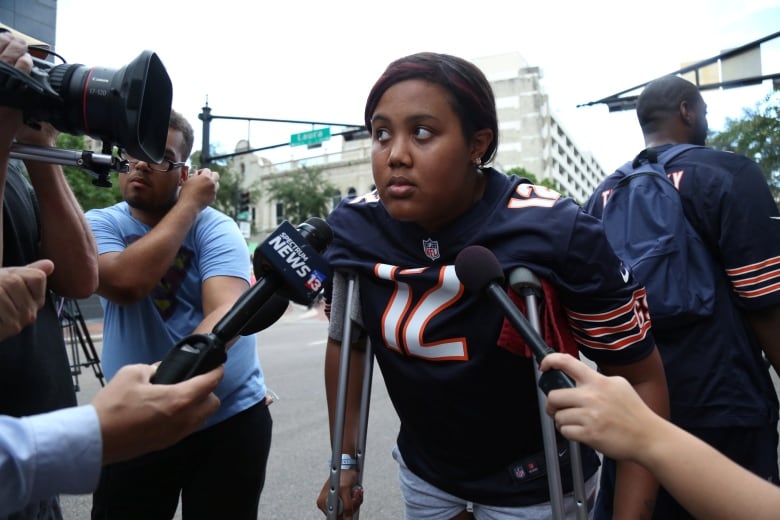 Another gamer, Chris (Dubby) McFarland, was hospitalized after a bullet grazed his head.

“I feel fine, just a scratch on my head. Traumatized and devastated,” he wrote on Twitter.

Many transported to hospital

The sheriff’s office said many people were transported to hospital, and its deputies found many others hiding in locked areas at The Landing.

A spokesperson for Jacksonville’s Memorial Hospital said it was treating three victims, all of whom were in stable condition. 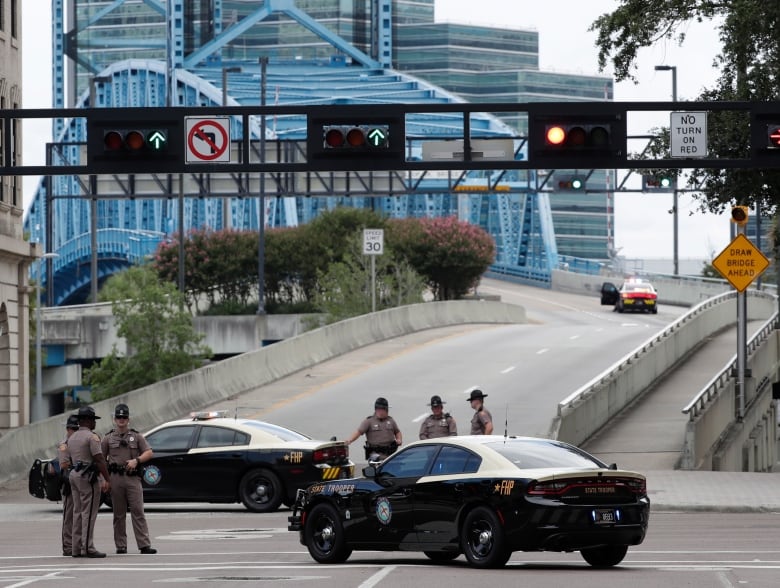 Florida highway patrol officers block the entrance to the Main Street Bridge near the scene of the mass shooting. (John Raoux/Associated Press)

The conditions of other patients was not available early Monday.

Reacting to news of the shooting during the tournament involving its game, Madden 19 maker Electronic Arts Inc said it was working with authorities to gather facts.

“The tragic situation that occurred Sunday in Jacksonville was a senseless act of violence that we strongly condemn,” a company spokesperson said to Reuters late on Sunday. “Our most heartfelt sympathies go out to the families of the victims whose lives were taken today and those who were injured.”