Bridenstine said in New Orleans that NASA’s responsibilities involve science, space exploration and technology development. As for defence and national security, he told reporters in New Orleans: “We want to be an agency that maintains its independence from those capabilities.”

Bridenstine was touring the Michoud Assembly Center, where workers are putting together major parts of systems that are planned to return Americans to the moon and, eventually, take them to Mars. In a towering building, Boeing workers are building parts of the 98-metre rocket known as the Space Launch System. Lockheed Martin workers are building the spacecraft called Orion.

The next generation of NASA’s Space Launch System will be 364 feet tall in the crew configuration, will deliver a 105-ton lift capacity and feature a powerful exploration upper stage. (NASA)

Bridenstine, a former Republican congressman, was nominated by Trump to head NASA last year and confirmed by the Senate in April.

He touched on the work at Michoud and other NASA concerns while standing next to a massive liquid hydrogen tank — a test version of one that eventually will be part of the SLS rocket.

Bridenstine was among the officials with Trump in June when he called for creation of a new military branch known as the Space Force. He said it’s needed because the nation’s space assets — including satellite technology and global positioning systems — are vital to numerous interests and industries, including communications, navigation, food and energy production, banking and climate.

“If we lose GPS, we lose banking in the United States of America. There’s no milk in the grocery store in a matter of three days,” he said.

Bridenstine spoke enthusiastically about the much-delayed James Webb Space Telescope, what is now a nearly $10 billion project. That next-generation technology is envisioned as the successor to the Hubble Space Telescope, despite an announcement in June — for the third time in less than a year — of a lengthy postponement.

Among the latest problems: In a vibration test of the telescope earlier this year in California by prime contractor Northrop Grumman, dozens of loose fasteners — some 70 pieces in all — came off. In another mishap, the wrong solvent was used to clean spacecraft propulsion valves, leading to a need for repair or replacement. 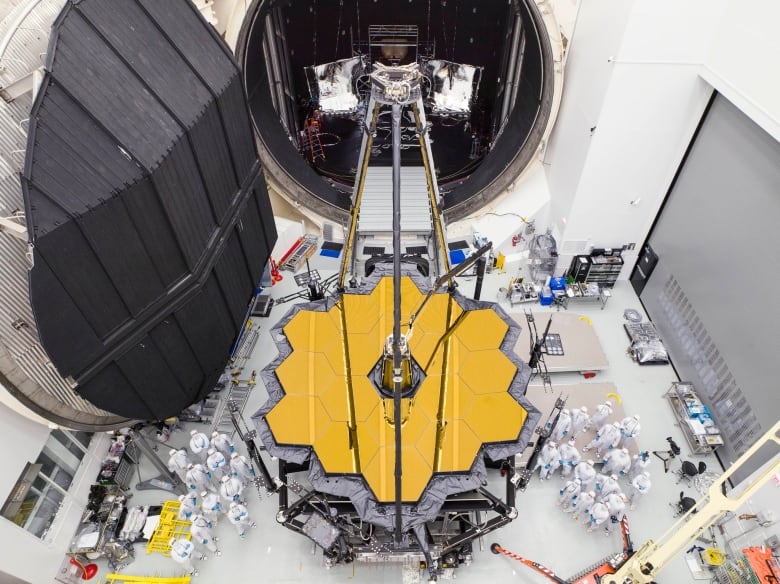 Engineers pose with NASA’s James Webb Space Telescope after it emerged from Chamber A at NASA’s Johnson Space Center in Houston on Dec. 1, 2017. (NASA/Chris Gunn)

Webb, which officials now hope to launch in 2021, is meant to peer farther into space and deeper into time than ever before. It will operate from a point 1.6 million kilometres from Earth.

Bridenstine gave a lengthy explanation of the infrared telescope’s design and mission and added: “We are, in fact, going to see back to the very beginning of the universe, what we call cosmic dawn.”

He stopped short of saying there would be financial penalties for Northrup Gumman to cover NASA’s burgeoning costs on the project but said the contractor is being held accountable.

Bridenstine praised workers at Michoud for their work on the Orion spacecraft and the SLS rocket that will launch it into space, saying their efforts are helping the U.S. get ahead and stay ahead of other nations in space.

“This is a brand new, very large project that is unmatched in the world,” he said. “And it will remain unmatched for a very long time.” 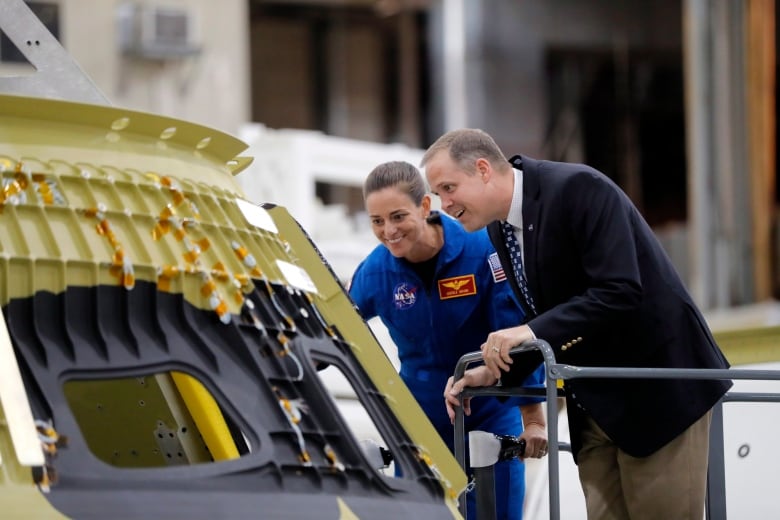 NASA Administrator James Bridenstine, right, and astronaut Nicole Mann look at the Orion Exploration Mission 2 crew capsule, the first one that will fly into space with a crew, at the NASA Michoud Assembly Facility in New Orleans, Monday, Aug. 13, 2018. (Gerald Herbert/Associated Press)

The SLS rocket is expected to launch an unmanned Orion mission beyond the moon and back, a 4,370-kilometre trip, in late 2019.

Bridenstine got a close up look at the Orion capsule with astronauts Stan Love and Nicole Mann, expected to be part of the crew for Orion’s first crewed mission.