Violet Vincent has only ever had cancer for a day.

It’s a half-truth her mother, Alena Vincent, will say to remind herself of the importance of each flight to Toronto for treatment. A half-joke to allay the fears of what lies behind the eyes of her 10-month old daughter.

Violet has retinoblastoma, one of about 23 Canadian children each year affected with the rare eye cancer. The five-year survival rate is higher than 95 per cent in Canada, the highest of any pediatric cancers, but it also poses a serious risk of vision loss.

She is the third girl in the family to have the hereditary form of the cancer: a mutation in the RB1 gene passed down from grandmother to mother to Violet. There was a 50-50 chance the malignant inheritance would pass to her, producing cells that divide uncontrollably as the retina develops behind her bluish-green iris.

But even all that information couldn’t prepare Alena for the phone call from the genetics counsellor when she was 15 weeks pregnant — the call that said her baby would have the same cancer that left her mother blind.

“I was first in shock. Then, initially, as it started to sink in, I had a little bit of guilt. And then a lot of tears,” she said.

Alena herself was diagnosed at birth and became one of the first people in the country to retain 100 per cent of her vision after treatment.

She wanted the same for her daughter.

Violet came into the world on Oct. 24, 2017. She had her eyes checked when she was a day old and her first laser treatment two days later. Doctors thought it might be a tumour but couldn’t be sure without a specialized scanner.

On the sixth day, a teleconference of doctors asked Alena to fly Violet to Toronto for weeks of treatment.

And on the tenth day, with her husband and two-and-a-half-year-old son at home in Edmonton, Alena took Violet to Toronto.

“I said from the start, the moment I found out that she had retinoblastoma, that the best choice for her would be the choice I would make,” Alena said.

The best choice was the Hospital for Sick Kids, the only place in the country at the time with a state-of-the-art scanner that can identify Violet’s tiny tumours — often smaller than a millimetre — before they pose a risk to her vision. 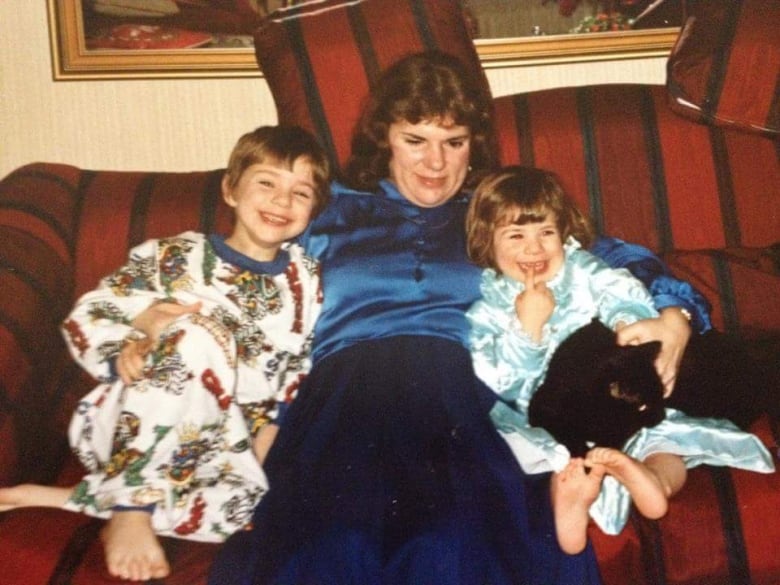 Alena Vincent, right, with her mother and brother at Christmas 1991. Alena was diagnosed with a hereditary form of retinoblastoma at birth that was passed down from her mother, to her, then to her daughter Violet. (Alena Vincent)

Within days of arriving in Toronto, the doctors found and treated two tumours.

“The tumours that show up around birth … those tumours are in the location in the retina that threatens vision,” said Dr. Brenda Gallie, the top ophthalmologist in Canada specializing in retinoblastoma.

Gallie has treated both Violet and Alena.

She said an imaging technique called optical coherence tomography, done using the specialized scanner, is the only way to find tumours early enough to save central vision.

Alena and Violet spent the next seven weeks travelling between the Ronald McDonald House and hospital appointments. There were some thin silver linings: seeing family in Guelph, the university friends who came to visit, the chance to go to Grandma’s 95th birthday party.

But it was Alena’s first time away from her young son, Kyler. 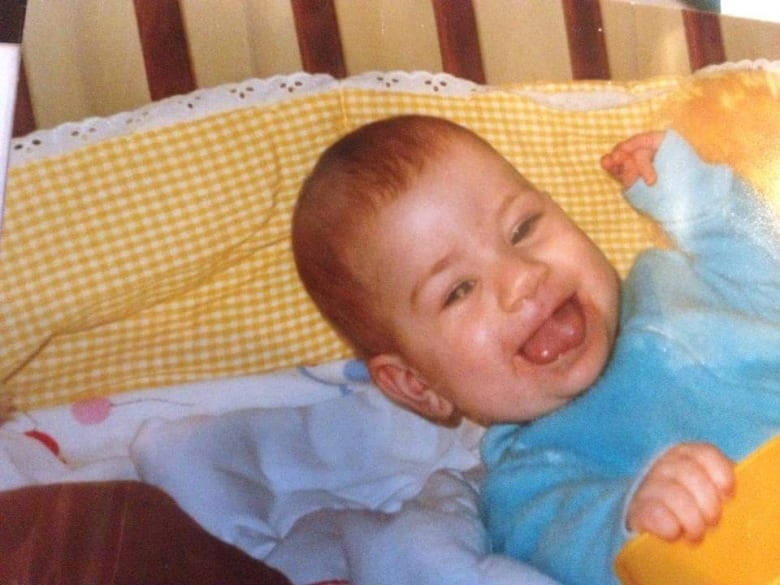 Alena Vincent as a baby. The white glow in her right eye is the reflection of the camera flash on a tumour, one of the ways to identify retinoblastoma. (Alena Vincent)

“We were single parenting on opposite sides of the country,” she said of her husband Chris. “He saw a five-pound baby leave and nine-pound baby return. So he missed a lot of the newborn stage.

“Luckily she decided to save her first smiles for when she got home.”

But home was never somewhere Alena and Violet could be for too long at a time. In the first 10 months of Violet’s life, the pair has gone to Toronto eight times.

In all, doctors there have found and laser-treated four tumours. The stays have become progressively shorter, to the point the pair will sometimes fly in and out within 24 hours.

Travel costs and treatment are covered by Alberta Health but hotel stays, lost income and extra childcare for their son are not. When Alena and Chris sat down recently to calculate the costs, the total came to $4,500.

“Before you know it, you can’t believe how much you’ve spent,” Alena said. “We’ve had to dwindle down our savings quite a bit in terms of having to cover this.”

Krysta Hendrickson, a good friend of Alena’s who wanted to help, started a GoFundMe page, titled Vy’s Eyes, last week to raise money for the family and raise awareness about retinoblastoma. 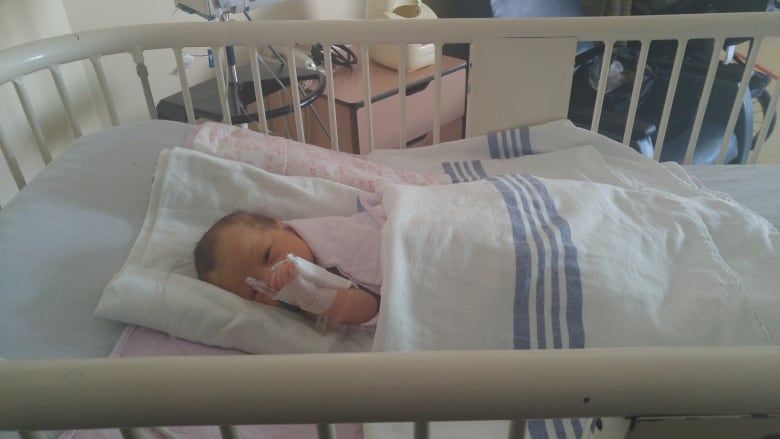 Violet Vincent recovers from laser treatment at the Hospital for Sick Kids in Toronto. She and mom, Alena, left when she was 10 days old. They got back just in time for Christmas, almost two months later. (Alena Vincent)

“Just as a parent seeing another parent, you just want to help in any way that you can,” she said.

If the campaign reaches the goal, half of the money will go toward Violet’s education. The other half will go toward bringing a specialized scanner to Edmonton.

“We have so much medical innovation in our province that it was a bit of a surprise to me that there would have to be travel to Toronto,” Hendrickson said.

“The travelling and being separated makes a situation like this even harder.”

An eye for black comedy

‘The same day Hendrickson posted the campaign, Stephanie Morin-Roberts was taking out her eye on stage at the Edmonton Fringe Festival.

Morin-Roberts was diagnosed with retinoblastoma when she was 2½ years old. A team of doctors — also led by Dr. Gallie — removed her left eye days later to stop the cancer from spreading.

Her experience growing up with cancer has become the basis of the play, physical theatre that uses dark humour, contemporary dance and yes, even prosthetic eyes, to raise awareness. 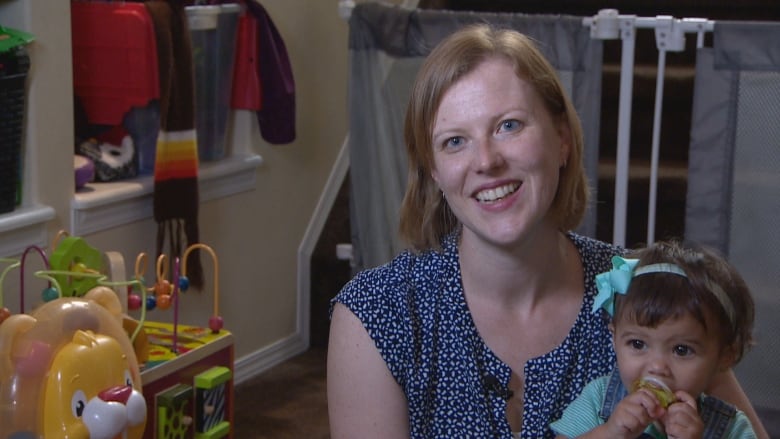 Morin-Roberts walks down the stairs of the Old Strathcona Library after a Friday afternoon performance, clutching a carriage with her infant daughter, Olive, rocking inside. In the last monologue of the show, she talks about the decision to get pregnant without first getting tested for the RB1 gene mutation.

“I was ready to face what happened because I had a pretty easy-going life and managed to live a comfortable life,” she said. “It wasn’t the deciding factor on whether or not I wanted to have a kid.”

Morin-Roberts eventually for tested during her pregnancy and the results showed she wasn’t a carrier for the gene — a reprieve for baby Olive.

Alena and Violet are waiting in the lobby down the stairs. Doctors have pointed to this mother-daughter duo as an example of what can happen when retinoblastoma is identified early and treated quickly.

It’s also the first time either of them are meeting a survivor that doesn’t share their genetics. 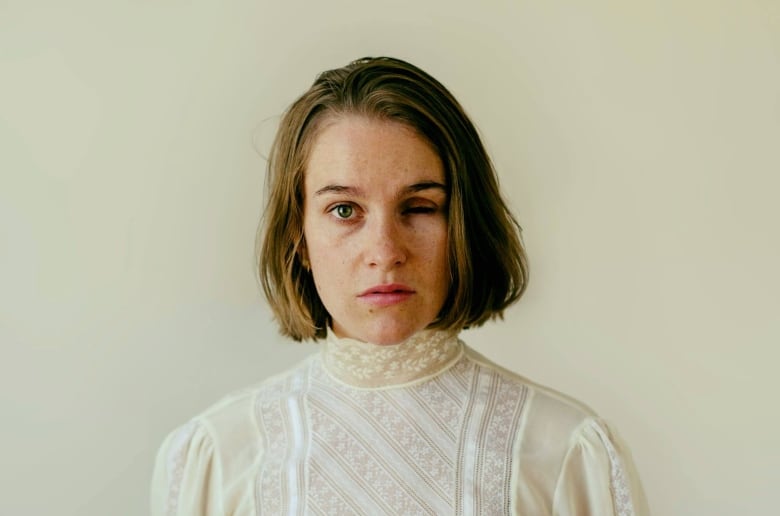 “Before it was just my Mom and I, and I really wasn’t aware of how many people had it,” Alena said.

“There’s usually a group of people somewhere going through a very similar thing,” Morin-Roberts said. “It’s so great how even things like this could bring people together and it ends up being positive no matter what the circumstances are.”

On Friday, Violet and Alena went for their first appointment at the Alberta Children’s Hospital in Calgary, where Gallie periodically visits for follow up appointments.

The scans came back showing no tumours in Violet’s eyes.

But even more surprising, the hospital just purchased the specialized scanner needed to treat infants with retinoblastoma, the first one west of Toronto.

No more expensive hotels in Toronto, since Alena and Chris have family in Calgary. And no more loneliness, since the whole family can manage the drive every six weeks for follow up appointments.

“For us as a family all around this is a fantastic change and will make things so much easier going forward,” Alena said, on the phone from Calgary after Violet’s appointment on Friday.

Alena expressed hope that with the scanner in Calgary, more families could say their child with retinoblastoma has only had cancer for a day — a blink of an eye in the arc of their lives.

“It’s just amazing that that opportunity is here for all of us.” 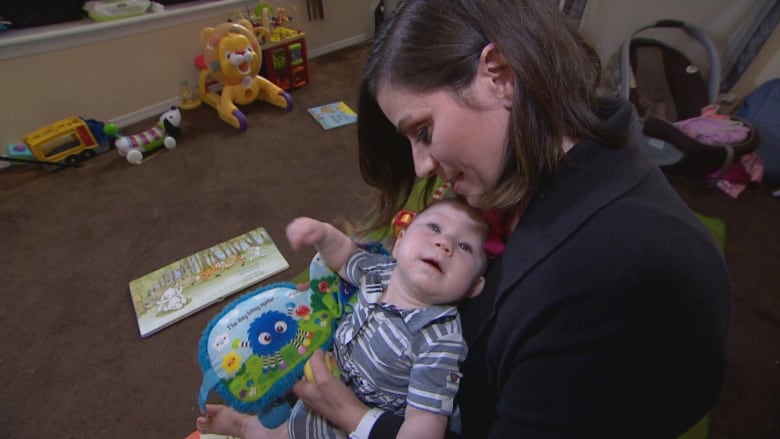 On a recent follow up appointment in Calgary, the family found out the Alberta Children’s Hospital just got a specialized scanner capable of identifying Violet’s tiny tumours. The family won’t have to travel to Toronto any more. (CBC)