In March 2009, Barack Obama was president of the United States, a ship captain named Richard Phillips was about to become famous, and the Beyhive was reluctantly tiring of Single Ladies.

It was also a devastating time for stock markets, which had spent the last several months being rocked by a financial crisis so sudden and so deep that it earned its own ominous moniker: The Great Recession.

Few may have known it at the time, but that month marked the turning point for investor fortunes, as global stock markets changed directions and began a bull run that continues to this day.

The bull market — which experts define as an increase of 20 per cent, or more — broke into record territory for longevity this week, as the biggest U.S. stock market index, the S&P 500, has now gone 3,453 days without inverting into a bear market (a drop of 20 per cent.)

There have been ups and downs over that period, to be sure, but over the past nine years, five months and 13 days, the stock market has risen at an impressive clip, with only the occasional small setback along the way. The current run beats the previous title holder that ran from the 1990s through the bursting of the technology bubble in 2000.

The S&P 500 has more than quadrupled since 2009, while the narrower Dow Jones Industrial Average has done almost as well. Buoyed by the so-called FAANG stocks, the tech-laden Nasdaq has done even better — up by 500 per cent. (The TSX, if you were wondering, has barely doubled over that same stretch, held back by the oil price collapse of 2015.)

Stock markets around the world often have images of bulls and bears, and these statues outside Frankfurt’s exchange are no exception. In the analogy, the aggressive bull represents buyers. Sellers, meanwhile, are depicted by the defensive bear. (Hannelore Foerster/Bloomberg)

To David Rosenberg, chief economist at Gluskin Sheff investment firm, the reason why the U.S. bull run began is simple.

“A good part of this stock market rally that we had this cycle was just digging ourselves out of the hole we had during the great recession,” he says.

Faced with bank failures, a plunging housing market and widespread fears of financial collapse, policy makers did whatever they could to try to turn things around. A big weapon in their arsenal was to cut interest rates, flooding the world’s economy with cheap money in the hopes it would encourage investors to spend it.

It worked, but it came with a bill that some say investors have yet to pay: debt.

“The way we got out of the crisis was by fuelling more borrowing,” says Christian Lawrence, a senior market strategist with Dutch bank Rabobank. All that cheap money lit a fire under all sorts of assets, sparking the rally that continues to this day. But in the process it increased debt levels, and left many people behind in the process.

“If you own assets it’s been great,” he says of the longest bull run in history, “but if you’re just in a normal income-paying job and you don’t own assets then perhaps this stock market rally has come at your expense.”

Lawrence says in the U.S., households now have bigger student debt and subprime car loans than they did before the financial crisis, and their ability to pay it back is even worse because they’re not earning as much.

“Unless we start to see wage growth picking up, this could be a dangerous position.”

Lawrence argues the current stock market boom has to run out of steam sooner rather than later, but that’s not a universal view.

Barry Schwartz, chief investment officer at the financial firm Baskin Wealth Management in Toronto, says bull markets tend to end once investors have entered a state of euphoria, when valuations are out of control.

“I don’t think we’re anywhere near euphoria,” he says, adding that if we were, “I wouldn’t be getting calls from clients saying ‘I’m worried about Donald Trump and what he’s going to do.'” 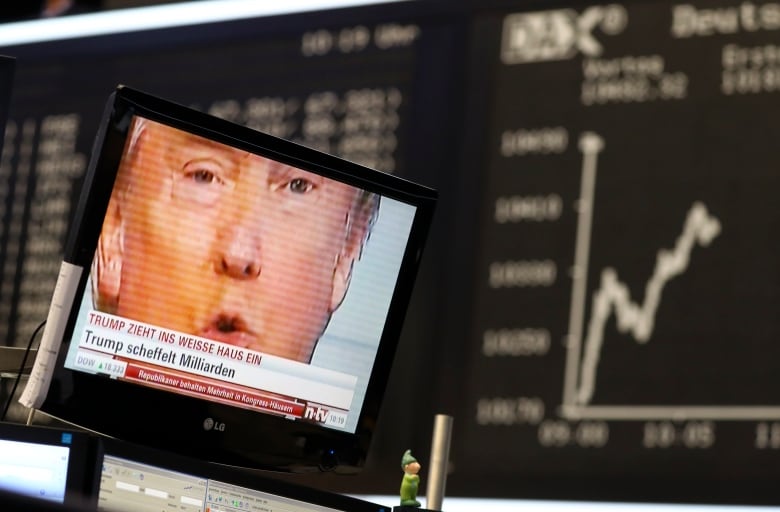 There were warnings of doom for stock markets when Donald Trump was elected, but U.S. markets have risen to even higher highs since Trump became U.S. president. (Kai Pfaffenbach/Reuters)

Worrying about Donald Trump was certainly conventional wisdom after Trump’s surprise election win in 2016, when the initial reaction was to get out of the stock market. What ended up happening, of course, is that stocks have since hit even higher highs, backed by a massive tax cut package and the easing of onerous regulations.

His sabre ratting on trade, however, seems to be giving investors some pause, as the S&P 500 has slumped since January when tariff talk began. To Rabobank’s Lawrence, Trump’s trade wars could be just the thing to snuff out the stock market rally.

Tariffs on imported goods “certainly pose a risk to U.S. companies going forward,” Lawrence says, “and if we see inflation from higher goods prices that will squeeze families on consumption.”

Another crash at some point is inevitable, but it’s the timing of it that’s difficult to predict–  Christian Lawrence, Rabobank

One canary in the coal mine for Rosenberg is how few companies are actually participating in the current rising stock market tide. Only about 10 per cent of the companies on the S&P are seeing their shares rise right now, he calculates, but they are big and influential enough to cause the overall index to keep inching higher.

“We’re on the verge of one of the longest expansions the U.S. has ever seen,” Lawrence says. “But it’s a very shallow expansion.”

Lawrence says the thing that worries him more than debt is the rise of inequality. That may not feel like a concern for stock market investors, but inequality should be on their radar because of the uncertainty it creates. “There are people that are being left behind and those that own assets are increasingly accelerating away from those people.”

A pushback against inequality was a factor in the rise of Donald Trump, and the Brexit vote in Britain, he notes, and there’s no reason to think the same sort of unexpected event can’t happen in stock markets. “Another crash at some point is inevitable,” he says, “but it’s the timing of it that’s difficult to predict.”

In and of itself, Rosenberg doesn’t see any reason to worry about the end of a bull run, just because the current one is getting long in the tooth. But he does admit that two little words are a bigger risk to stock market investors than any others.

“What usually ends bull markets … in two words, are interest rates,” Rosenberg says. “And it won’t be different this time around.”

With files from Peter Armstrong, Laura MacNaughton and Meegan Read