New aerial images give a rare glimpse of an isolated tribe in Brazil’s Amazon, showing 16 people walking through jungle as well as a deforested area with a crop.

In a clip released Tuesday night, one of the tribespeople appears to be carrying a bow and arrow.

Brazil’s agency for indigenous affairs, Funai, said it captured the drone shots during an expedition last year to monitor isolated communities, but only released them now to protect their study.

Researchers monitored the tribe in Vale do Javari, an indigenous territory in the southwestern part of the state of Amazonas. There are 11 confirmed isolated groups in the area — more than anywhere else in Brazil.

The agency has been studying the community in the images for years, but this was the first time it was able to catch it on camera.

“These images have the power to make society and the government reflect on the importance of protecting these groups,” said Wallace Bastos, Funai’s president.

This 2017 photo released by the National Indian Foundation (FUNAI) shows canoes on the bank of a river in Vale do Javari, Amazonas state, Brazil. An agency official told The Associated Press that they had monitored this tribe in the jungle for years but had never caught it on camera. The pen was placed on one of the boats by FUNAI to show the size. (FUNAI via Associated Press)

Bruno Pereira, who coordinates Funai’s study of isolated groups in the region, said these documentations also help researchers study their culture. The agency has not yet been able to identify the name of the tribe, though it has guesses about its ethnicity and what language it speaks.

“The more we know about isolated communities’ way of living, the more equipped we are to protect them,” he said.

Overall, the agency has registered 107 isolated tribes in Latin America’s largest nation. While Funai takes photos and videos sometimes, it has not been making contact with them for over 30 years. 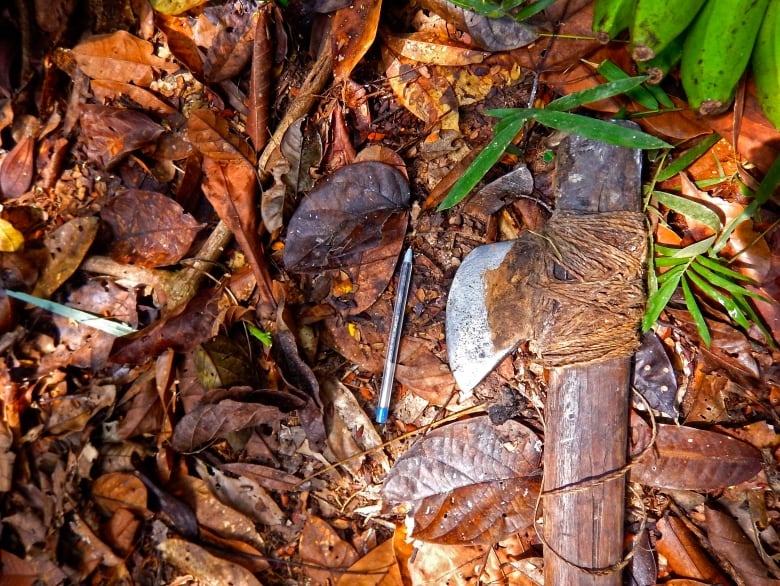 This 2017 photo released by the National Indian Foundation (FUNAI) shows an axe on the ground in Vale do Javari, Amazonas state, Brazil. The pen was placed by FUNAI to show the size. (FUNAI via Associated Press)

Pereira told the Associated Press these communities are aware of the cities and farms in their surroundings, but they often choose to isolate themselves due to traumatic experiences with the outside world.

External contact can often be deadly, ending in massacres or epidemics wiping out tribes. Last year, a group of illegal gold miners allegedly killed 10 people in an isolated community.

“If they wanted contact with the outside world, they would seek out ways to communicate with us,” Pereira said.