Some people in Strathcona say they’re looking for a win-win plan to accommodate cyclists, motorists and local residents in the ongoing debate about Edmonton’s bike network.

Several people living on 87th Avenue told the city’s urban planning committee on Tuesday they’re concerned that a protected bike route between 96th and 106th streets would restrict parking in the neighbourhood.

Don Spence was one of eight people who showed up at the committee meeting to ask councillors to reconsider the plan for 87th Avenue.

“A bike network is a good idea,” Spence said. “[But[ this renewal is not for us.”

Spence said he thinks the plan favours cyclists, potentially cutting off parking for local residents and people trying to visit them.

Don Spence, middle, was among several people to share their concerns about a protected bike lane on 87th Avenue with the city’s urban planning committee on Tuesday.

He said bike lanes should be painted instead of laying down concrete curbs and installing cyclist-specific signals at intersections.

Coun. Ben Henderson reassured residents that the city is still considering options for that strip as neighbourhood renewal discussions continue.

Dave Buchanan with Paths for People, a non-profit dedicated to better infrastructure for cyclists and pedestrians, said segregated bike lanes are safer.

“I’m a confident cyclist,” he told the committee. “But imagine your grandchild riding a bicycle down 87th Avenue, a car door could open at any time.”

In nearby Garneau, the city plans to put protected bike lanes along 110th Street between 76th Avenue and 90th Avenue, connecting the southside to the High Level Bridge across the North Saskatchewan River.

Buchanan and other cyclists suggest the lane would be better suited for the busy 109th Street, to give cyclists and pedestrians better access to shops and restaurants.

With construction on this portion expected to begin in 2021, Coun. Michael Walters said he likes the idea of the lane down 110th but will ask city staff to study 109th as well.

“It is an important arterial road to get people from south Edmonton to downtown,” he said. “And that won’t be forgotten in this conversation, I assure you.”

He acknowledged that some people who live near 109th Street envision a more pedestrian friendly street with mixed-use commercial and residential developments. 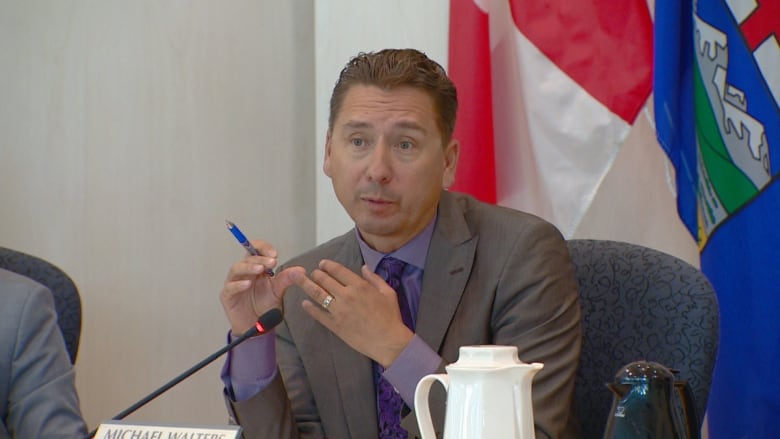 Coun. Michael Walters asked the city to study the options for putting a protected bike lane on 109th Street or 110th Street. (CBC)

“I think we need to spend some time looking at that as a possible route.”

He said with construction on that portion slated to begin in 2021, there’s time to consult residents and businesses.

Construction in Strathcona has been ongoing throughout the summer, adding 4.7 kilometres of bike lanes to the existing 3.7 km system.

The new network would add another 5 km in Strathcona and Garneau, at an estimated cost of $5.8 million. The Strathcona portion, including 87th and 100th streets, is slated to start in 2019.