Graydon Cuthbertson nearly lost his legs from compartment syndrome.  He has gone through multiple calf surgeries, and when the dressings on his leg wounds are changed, the sensation can range from discomfort to excruciating pain.

But this time, the 47-year-old’s mind is elsewhere — at a virtual, lake-side campground instead of his room at the Rockyview General Hospital in Calgary.

“The time goes by a lot quicker. I can feel her touching my legs and stuff but I don’t really feel anything going on,” he said.

Rockyview is the first hospital in Canada to use virtual reality technology to help wound care patients alleviate the pain and stress of treatment. An anonymous donor funded two Samsung Gear headsets, allowing patients to escape to one of 12 VR experiences.

“I found that when I just put on the goggles, I could go to Cirque du Soleil, I could swim with dolphins … compared to being there for an hour and a half,” he said.

75 per cent reduction in discomfort

Patients using virtual-reality therapy at the hospital were asked to rate their level of discomfort — which includes ratings of pain, nausea and anxiety — and overall experience, before and after each session.

The hospital said patients reported a 75 per cent reduction in discomfort and a 31 per cent improvement in overall experience.

Scout Windsor, a video conference tele-health technician at the hospital, said they tried to pick experiences that would be both distracting and relaxing for patients.

“There’s some experiences that are just really wonderful and you can be in them for any length of time.”

“It is the quickest way to make a maximum impact on the patient with such a painful type of procedure, that we can see the immediate benefits,” said Anderson.

Graydon Cuthbertson said virtual reality helps time pass quickly while the dressings on his legs are being changed. (Anis Heydari/CBC)

And it’s not just improving patient experience — it’s easier on the staff, too.

“We notice that we’re having less anxiety as health-care practitioners because we don’t like to have our patients experiencing pain. We don’t want to hurt people, the fact that they’re happy and looking forward to their wound care experience has lessened our anxiety in having to treat our patients,” said wound care physiotherapist Jaclyn Frank.

Unlike painkillers or sedatives, the hospital said patients reported no side effects from using virtual reality. They say it could be widely used as a complementary therapy that could possibly reduce dependency on drugs.

Frank said she sees a change the moment patients put the goggles on.

“You can see an immediate effect in their body language, in their breathing. Their whole body relaxes,” she said. 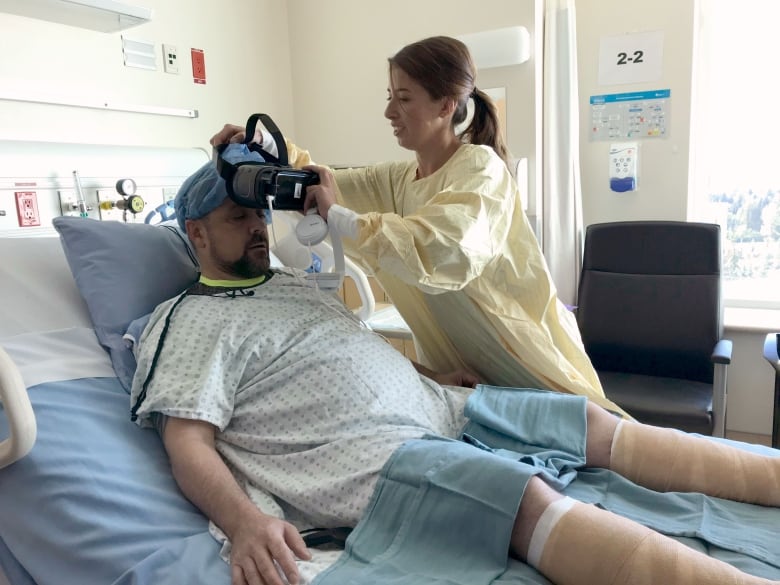 “Their breathing slows down and you can tell that they’ve been transported somewhere else and they’re not in the wounds room receiving what can potentially be a painful treatment with us.”

In addition to wound care patients, the technology is also being tested in the intensive care and cardiac care units.

Results from the study are being shared with other AHS sites, and the program has also received interest from a hospital in New Westminster, B.C.

“We’re kind of looking to expand anywhere it would be helpful,” said Windsor.

With files from Anis Heydari