Canada’s homegrown tech firms say they’ve been shut out of a multimillion-dollar project to consolidate the federal government’s data operations, with American giants such as IBM and Microsoft getting the inside track.

The catch is that any firm applying must have a track record of at least five equivalent jobs in the last five years, with each previous contract worth at least $10 million.

Those terms take virtually every homegrown Canadian company out of the running.

“This is just another example of structural challenges that prevent domestic innovators to even bid for the project,” said Benjamin Bergen, executive director of the Council of Canadian Innovators, which represents more than 75 CEOs of homegrown tech companies.

“We need to see meaningful changes in Canada’s procurement strategy soon, so that domestic vendors don’t completely give up on trying to work with their own government.”

The Council of Canadian Innovators was founded in 2015 by Jim Balsillie, formerly of Canadian tech darling BlackBerry, to press Ottawa to steer more work to homegrown firms.

Last November, it inked a non-competitive contract with IBM Canada worth at least $500 million, with options that could bring the value up to $790 million. It was the largest sole-source deal ever signed by the agency, which was created in 2011.

According to an internal Treasury Board document obtained by CBC News in 2016-2017, IBM Canada was Ottawa’s top IT vendor, with contracts valued at $3.1 billion in that fiscal year.

It’s an uphill battle.– Toronto tech-firm founder Craig McLellan on the difficulty for Canadian firms in getting federal government contracts

The requirement “is one of the indicators of an applicant’s capability and experience in executing such large and complex migrations,” spokesperson Monika Mazur said in an email.

She added that because of national security interests, all firms must have a presence in Canada to bid, and that “small and medium suppliers are encouraged to partner with larger organizations to share their unique skill sets and experience to contribute to the success of this modernization initiative.”

Craig McLellan, founder of the Toronto tech firm ThinkOn, said there’s plenty of government funding for tech start-ups in Canada, but much less support for established companies looking to expand to be able to compete globally.

“It’s disappointing when it’s not well thought through, as far as how to leverage these opportunities to help domestic companies,” McLellan said. “I think most Canadian entrepreneurs would tell you they much prefer a hand up than a handout.”

“Once you get beyond start-up and you get to the scale-up phase, it’s really about learning how to compete and really honing your talents so you can take it abroad.”

“It’s very difficult to carry the same weight as some of the foreign multinationals,” he said. “It’s an uphill battle.” 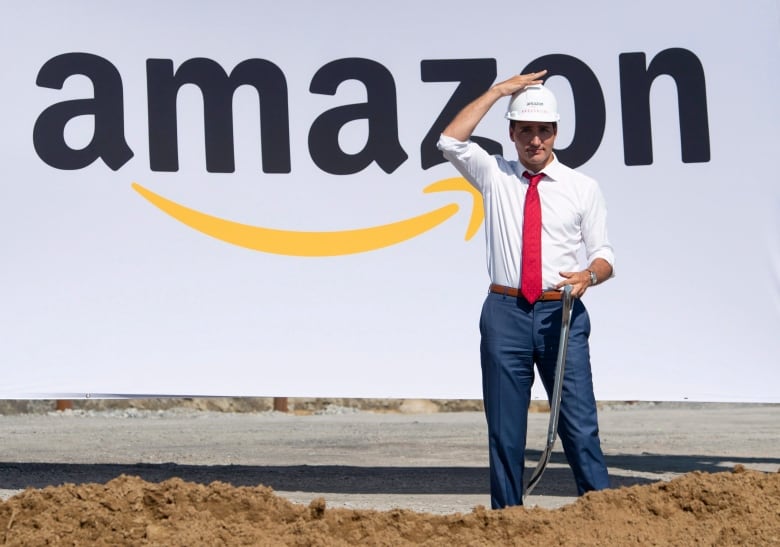 This week, Prime Minister Justin Trudeau held a news event at the future site of an Amazon warehouse in east-end Ottawa, saying the American-based firm is helping to further establish Canada as a “hub of tech and innovation.” The facility is eventually expected to employ 600 people.

The Liberal government launched a new agency in March, Invest in Canada, with a $218-million budget over five years to attract foreign companies to Canada. The agency says about one in every eight Canadian workers is employed by a foreign-controlled, multinational enterprise.