The mural at the intersection of Roncesvalles and Garden avenues sprawls across the Solarski Pharmacy and echoes the style of the late Anishinaabe artist Norval Morrisseau whose work is characterised by vivid colours outlined in black.

Indigenous artist Philip Cote was approached by the Roncesvalles Business Improvement Associatin to collaborate on a new mural for the neighborhood. (Rhiannon Johnson / CBC)

Philip Cote, Indigenous artist, academic and lead painter on the mural, has about twenty other murals to his credit around Toronto, mostly in schools.

“This is a political statement to bring our stories into the open,” says Cote who works with his assistant, Nelly Torossian.

“Mainstream society has put doubt on everything that is Indigenous, so how do we break that? We start looking at our culture and seeing ways that we can bring that into our lives and I think this is part it,” he says.

All of the elements of the mural are connected to a story that begins with the creation story of the first man and woman.

As the mural flows to the right there are different animals including a wolf who in Anishinaabe stories is a brother of man, a bear who is a teacher and healer, and thunderbirds flanking both ends for protection.

For those who want to learn more about the stories told in the mural, Cote plans to record a narration that will be available through a smart phone app. A plaque with instructions on how to hear Cote’s commentary will be installed once the mural is complete.

Cote was approached by the Roncesvalles Business Improvement Area (BIA) to design a new mural which is being funded by StreetARToronto.

Veronica Feihl, manager of the Roncesvalles BIA, first came across Cote’s work during a First Story Tour that lead her to a series of ten murals under the Old Mill subway bridge.

“I think it’s important that we make room — not only in our community but in the city and our community — for the stories that Indigenous people have, stories that many of us who were born in Canada weren’t exposed to at all in during our schooling,” says Feihl. 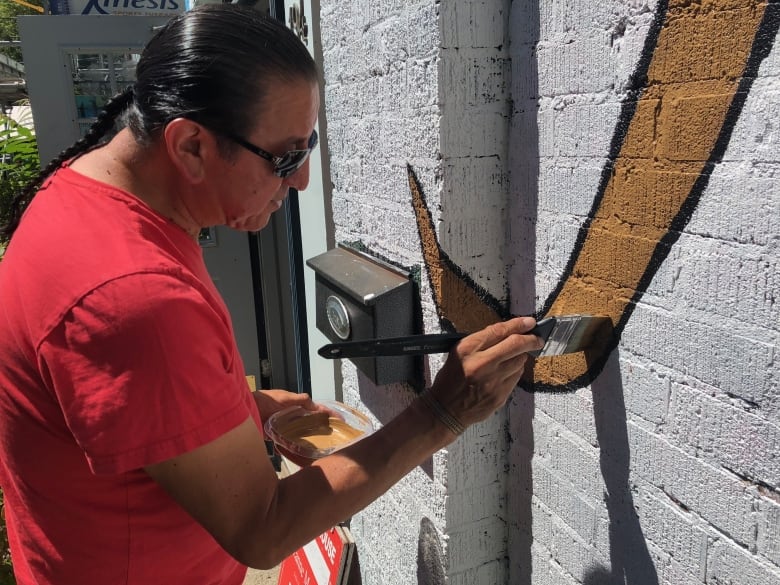 “The main thing that I want is for people to get a good feeling just from looking at it, if you can make someone feel that for a moment you’re spreading something good around,” Cote says. (Rhiannon Johnson / CBC)

Even though the neighbourhood became home to a wave of Polish immigration after the Second World War, Feihl says it’s important to remember there were Indigenous communities here for thousands of years before that.

The designs of the new Roncesvalles mural are heavily rooted within Indigenous storytelling, but there is also a collaborative element to the piece.

Local Roncesvalles artist Jim Bravo designed the word Roncesvalles in the mural which will be surrounded by floral imagery. 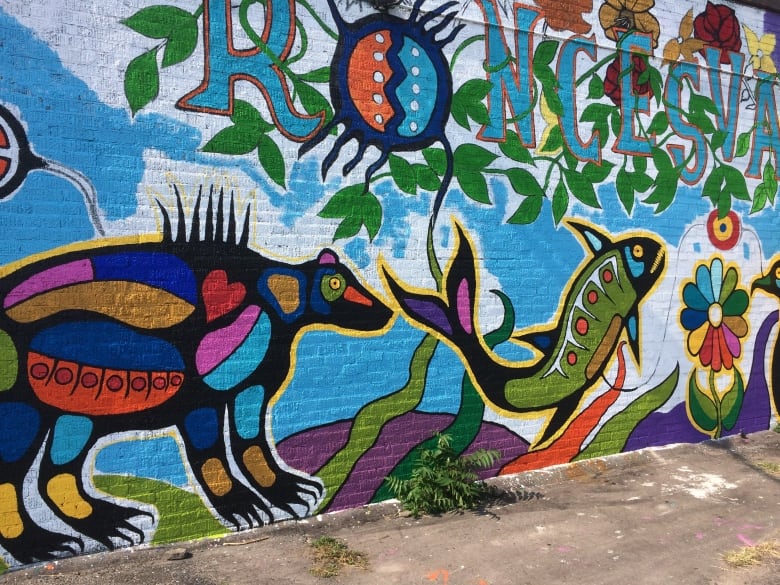 Intense colours outlined in black are characteristic of the Woodland style of art made famous by Anishinaabe artist Norval Morrisseau. (Courtesy of Jane Brown)

The “O” in Roncesvalles, however, is part of Cote’s design and represents the eighth fire prophecy that speaks of a time when western society comes together in harmony with Indigenous people as they reclaim their culture.

“I think we’re actually seeing that happening so it is pretty cool and I love the fact that it was a prophecy and it has some bearing on us collectively today,” says Feihl.

Cote says at least twenty people a day come up to ask about the mural and it energizes the artists.

Abby Forero Hilty, who just moved to Canada from Switzerland with her husband and two kids, was picking up her daughter at a camp nearby when she came across the mural. 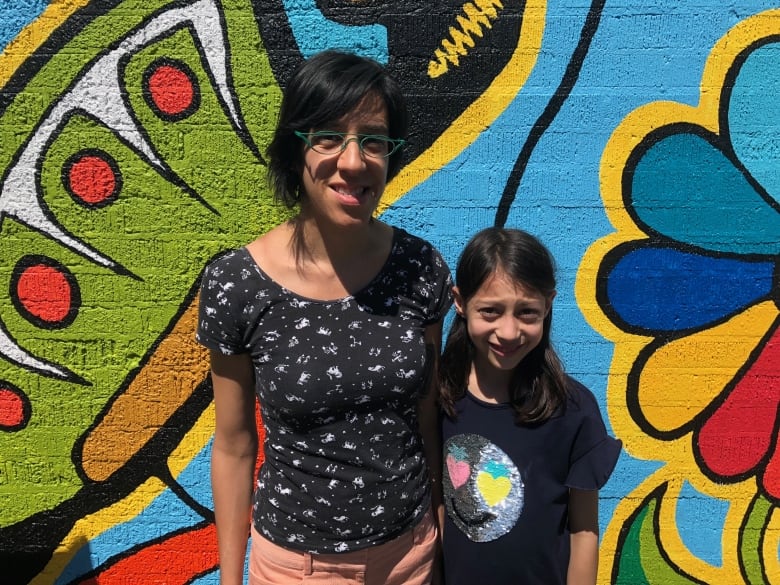 “I think it’s really moving to see the representations of nature, in all the different forms and colours,” says Abby Forero Hilty who came across the Roncesvalles mural when she was picking up her daughter from camp. (Rhiannon Johnson / CBC)

She returned to see the progress of the mural and grab one of Cote’s business cards.

“I think it’s really moving to see the representations of nature, in all the different forms and colours,” she says

“It’s so accessible, I just stopped by and immediately a dialogue begins, it’s really easy to just begin to start talking.”

Cote plans to continue to bring more Indigenous art to the public to open a dialogue and spread knowledge.

“The main thing that I want is for people to get a good feeling just from looking at it, if you can make someone feel that for a moment you’re spreading something good around,” Cote says.

“That was Morrisseau’s dream, he was doing that work to heal people.”

The team expects the mural to be completed within the next couple of weeks, weather depending.