Homegrown is a series that looks at how Alberta’s local movement is changing buying habits, connecting people, and shaping communities. Share your story ideas with the Homegrown team by writing to  josee.st-onge@cbc.ca

Shopping for food at the farmers’ market isn’t a chore for Jacquie DuVal. It’s a chance to catch up with her favourite local producers.

“They know me, I know them. I spend a lot of time when I’m shopping there on getting to know them.”

The direct contact with vendors also allows DuVal to find out how the food she buys was grown and processed.

“It’s really nice to get to know exactly what went into that product and why it has a higher price point then, say, a chicken that you buy at Costco,” she said.

Millennials like DuVal are driving the local food movement across the country, according to data compiled by Ipsos as part of an ongoing study tracking the buying habits of 20,000 Canadians.

People between the ages of 21 and 37 represent 24 per cent of the population, but are buying 32 per cent of locally grown and sourced foods.

Farmers’ markets generated $925 million in sales in 2016, which is almost four times the amount spent in 2004, according to a survey conducted by Alberta Agriculture.

“The growth has been absolutely incredible,” said Eileen Kotowich, a farmers’ market specialist for the Alberta government.

“The number one way for people to find local food is through the grocery store,” said Kotowich. “But farmers’ markets are a close second.” 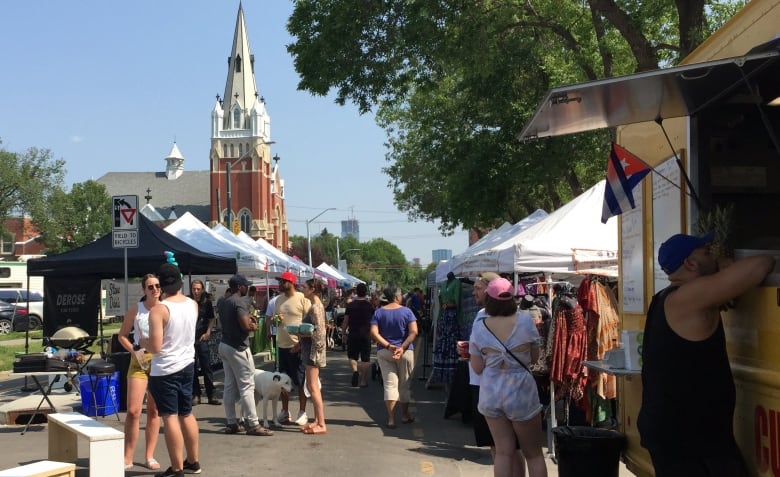 Between raising her two young daughters and running Plated, her local food-focused PR business, she doesn’t have time to shop exclusively at farmers’ markets.

DuVal also orders some of her groceries from the supermarket, while still searching for local products.

“Alberta first, then Canadian made, and organic if possible. The closest proximity to where we are,” said DuVal, describing her shopping preferences.

Young families aren’t just looking for food when they shop at a farmers’ market. They are also seeking a sense of community.

“You’re all here for a similar experience, so you start engaging with the people around,” said Amy Laing, who lives in Edmonton’s Westmount neighborhood and shops at the 124 Grand Market.

Creating a gathering place for families is what 124 Grand Market founder Kirsta Franke was striving for when she expanded the market to a second day and location along Edmonton’s busy 124th Street. 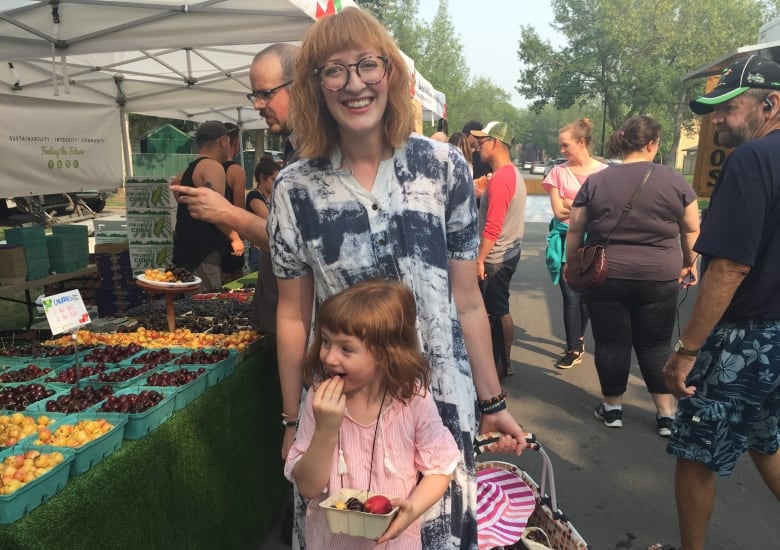 Amy Laing, with her daughter Lily, shops at the 124 Grand Market off 124th Street and 108th Avenue. (Josee St-Onge/CBC)

Three-quarters of the shoppers at the market are from surrounding neighbourhoods, she said.

“We noticed there was a huge need, especially on 124th Street with all the great local businesses along here, to bring more foot traffic to the street and enliven the public realm.”

The 124th Street market, which is in its seventh season, runs Thursday evening on 108th Avenue and expanded for this summer to Sunday afternoons along 102nd Avenue.

The market’s Little Beans program, which teaches kids about healthy nutrition, is also a draw, with over 600 children registered.

Laing said her four year-old daughter, Lily, enjoys the program and learns through interactions with the vendors.

“It’s teaching her about the importance of food,” said Laing. “It’s about the connection to the things that you are putting in your body.”

Albertans intend to buy even more local food in the future, according to a 2016 survey conducted by Alberta Agriculture.

“They have indicated that they do intend to spend more,” said Kotowich. “The intention is that those who already shopping will continue to spend more.”

Older millennials who have become parents — those in the 27 to 37 age bracket — are buying more local food than any other cohort, said Kathy Perrotta, vice-president of marketing with Ipsos.

“If we consider the balance of millennials that are un-nested at this point, as they start to have children, I think we’ll see this movement continue and grow even stronger.” 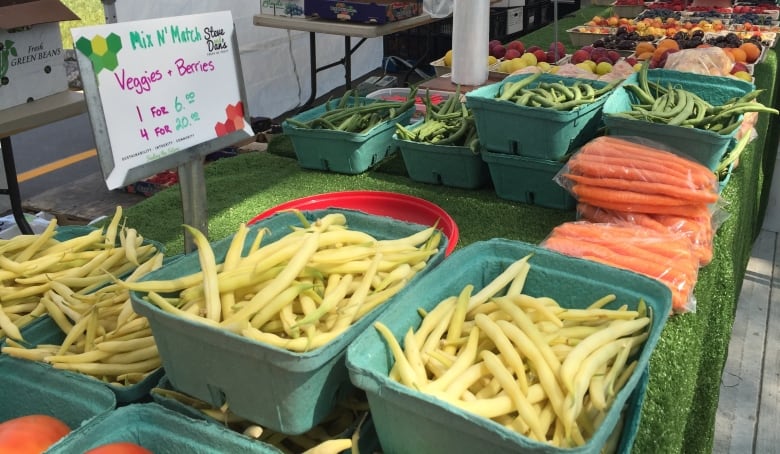 Fresh fruits and vegetables, like these from B.C. vendor Steve and Dan’s, are the most popular local food items in Canada, according to an Ipsos study. (Josee St-Onge/CBC)