Zimbabweans on Monday voted in their first election without Robert Mugabe on the ballot, a contest that could bring international legitimacy and investment or signal more stagnation if the vote is seriously flawed.

About 5.5 million people were registered to vote in this southern African nation anxious for change after economic and political paralysis during the nearly four-decade rule of 94-year-old Mugabe.

Dozens of people waited in line to vote outside many polling stations in Harare, the capital.

“I want to do this and get on with my business. I am not leaving anything to chance. This is my future,” said Emerina Akenda, a first-time voter.

Thousands of election monitors have fanned out across the country to observe a process that the opposition says is biased against them despite electoral commission assurances that it will be credible.

The two main contenders are 75-year-old President Emmerson Mnangagwa, a former deputy president who took over after Mugabe stepped down under military pressure last year, and 40-year-old Nelson Chamisa, a lawyer and pastor who became head of the main opposition party a few months ago after the death of its leader Morgan Tsvangirai.

“This is a critical moment in Zimbabwe’s democratic journey,” said Ellen Johnson Sirleaf, former Liberian president and a leader of one of the international observer missions.

“The elections today provide an opportunity to break with the past,” Sirleaf said at a polling station in a school in Harare. “The lines and voter enthusiasm we are seeing this morning must be matched by an accurate count and their choice must be honoured.”

Past elections were marred by violence, intimidation and irregularities, but Mnangagwa, a former enforcer for Mugabe who says he now represents change, has promised that this election will be free and fair. 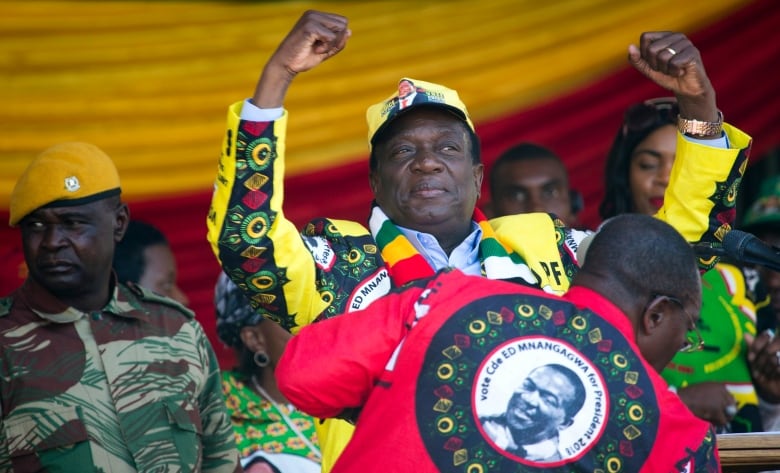 Zimbabwean President Emmerson Mnangagwa addresses the final rally of his campaign at the stadium in Harare on Saturday. (Jerome Delay/Associated Press)

The presence of Western election monitors for the first time in years is an indicator of a freer political environment, though concerns have been raised about state media bias toward the ruling party as well as a lack of transparency with the printing of ballot papers.

Inside polling stations on Monday, voters were given three ballot papers: one for their presidential pick, another for member of parliament and a third for local councillor. Polling officers helped voters put each ballot paper in the right box. 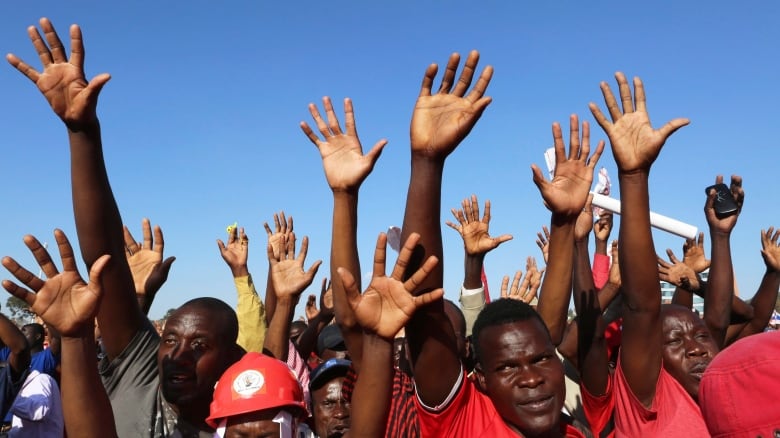 Supporters of Nelson Chamisa raise their hands in support during his last rally in Harare on Saturday as the country seeks to move past decades of economic and political paralysis. (Tsvangirayi Mukwazhi/Associated Press)