​You might already be familiar with the idea of leave-no-trace camping: whatever you bring in, take it right out again.​

If you add zero-waste principles to that equation, you’ll end up with a pretty light load (garbage-wise, anyway — your reusable-container load will probably be hefty).

As challenging as it sounds, a pair of clean-living experts say the two ideas go hand in hand and employing them both at the same time is doable, with a little planning.

If you’re curious about zero waste, it might even be a good way to sample some of the practices.

“If somebody wants to try zero waste for a weekend and see how that goes in their own everyday life, I think it’s totally, extremely related,” said Bethany Daman, a co-ordinator at Winnipeg’s Green Action Centre.

“Trying to figure out ways you can eat and live in a more sustainable way — absolutely I think it’s possible.”

Angela Anderson, who has been working on her zero-waste lifestyle for the past two years, says if you love nature, it’s a good way to take care of it.

“I would say that it’s more of a pain in the butt to the animals to be choking on plastic,” she said.

And anyway, Daman said, you’re going to be spending time packing and planning regardless.

“You’re already needing to put all that effort in — why not go that extra step to ensure that you’re going to go zero waste?”

When it comes to backcountry snacking, even non-zero-waste campers face challenges, Daman said.

Water is a big one, but Daman suggested bringing a large reusable container full of water and making use of any potable water provided on-site, rather than carting in a pile of bottled stuff.

General zero-waste grocery strategies can be used for food, including shopping at bulk food stores — take your own bags or containers — and farmers markets, which don’t use as much packaging, Daman said.

“I think about the number of things you can get at bulk food stores and then create your own food packs — you can put them into reusable sandwich bags and stuff like that.”

“A lot of campers, they want quick foods, right? Hot dogs, macaroni salad, those kind of things,” she said.

“It’s possible to buy unpackaged hot dogs from the deli and to pre-make your salads and stuff like that so you’re not bringing all that extra waste to nature.”

The truly dedicated can even dry some of it out to increase its shelf life if they plan to be out for a while, Daman said.

Once you’ve shopped and prepped, you can package that food up in reusable containers to cut down on waste even more. Daman and Anderson recommend leaving glass behind — it’s heavy and breakable — and opting for light options like reusable beeswax food wraps.

The wraps are usually made of linen or cotton and coated in beeswax, Anderson said. They can be used in place of plastic wrap and then washed in cold water and reused.

If you don’t have any of those on hand, reusable plastic containers are still a step up from their single-use counterparts, Anderson said.

Daman said she also holds onto any Ziploc or single-use plastic bags she gets and reuses them for camping to give them a second life.

When it comes to keeping your food cold, Daman recommends filling your cooler with ice packs instead of buying bagged ice where you can.

If you’d rather buy bagged ice, Daman suggests getting really big bags, slicing them across the top and then re-using the bag for other purposes on your trip.

Gear-wise, Daman has a few waste-reduction tips you might already be using in your daily life that can be transplanted to the campsite.

“Let’s say you’re going to a food truck or even camping, make sure that you bring reusable cutlery with you, rather than just relying on the single-use plastic cutlery that is handed out — or that some people will just bring camping with them and then end up just tossing out,” she said.

“Beverage containers, coffee from coffee shops — we really encourage people to bring their own mugs and water bottles with them when they go out places.”

Daman uses her kitchen cutlery when she goes camping, but if you’d rather have a dedicated camping set, she recommends checking out the thrift store rather than buying new. 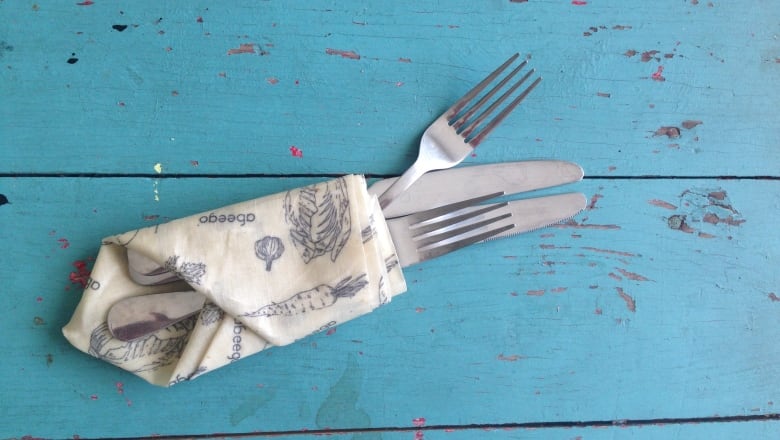 While you’re at it, you can also keep an eye out for plastic or melamine plates or other items you don’t already have, she said.

Second-hand not your thing? Resist the temptation to buy cheap and chuck it after.

“If you are camping regularly and you’re wanting to invest in camping gear, invest in something that is actually really quality equipment so that you’re not constantly replacing it,” Daman said.

“If you don’t camp often, then you can look at renting your gear or borrowing it from someone else, rather than just going out to a cheap retailer and buying a really cheap tent.”

For starting fires, Daman and Anderson recommend dryer lint or newspaper for kindling.

For any waste you do make, Leave No Trace Canada — an organization that promotes responsible camping whose principles are recommended by the province’s camping guides — has a simple rule: pack it in, pack it out.

When Daman camps, she separates garbage as she goes so it’s easy to compost, recycle and trash different items when she gets home.

“If you have something that’s plastic and you’re going camping, it is not OK to burn your plastic waste,” she said.

To keep things tidy, Anderson makes her own hand sanitizer and cleaning products and transports them in reusable containers.

To wipe up, she uses cloth rags instead of paper towel.

When it comes to dishwashing, it’s important to remember to get a biodegradable soap, Daman said.

“They can be used for things from washing your body to cleaning your dishes, which is really convenient,” she said.

If you’re using biodegradable soap, Leave No Trace Canada recommends using small amounts and doing so about 70 metres away from any bodies of water. Once you’re done, scatter soapy water.