When Remy Rodriguez grows up he wants to be a famous paleontologist and a tow truck driver.

When the five year old from Colorado Springs could choose where to go for his birthday, he opted for the dinosaur attractions of Alberta over Disney World.

“We kind of just thought he’d say Disney World, but he looked up at us and he said, ‘I want to go to Alberta, Canada,” said Michelle Rodriguez, Remy’s mother.

The precocious and pint-sized paleontologist first heard about Alberta’s dinosaur connection when he started taking Dino 101, a free online course out of the University of Alberta, with his mom at age four.

He can now fire off a definition of convergent evolution on demand and will happily explain that a Pteranodon is not a dinosaur to any novice who utters the mistake within his earshot.

Michelle said she was fearful her preschool son was, on account of a lack of sophisticated Triassic knowledge, about to stop seeing her as a source of infinite wisdom several years ahead of schedule.

That’s when she decided to start taking Dino 101. And when Remy saw renowned paleontologist Philip Currie on the screen, leading courses on fossilization and geologic time, he was captivated.

So when Michelle asked Remy why he decided to choose Alberta, after she’d recruited family and even the preschool teacher to surreptitiously persuade Remy that Disney World was indeed the most magical place in an effort to sway his decision, he already had an itinerary in mind.

“He was like, ‘well, that’s where Phil Currie works,'” she said. “He knew about the Royal Tyrrell Museum and Dinosaur Provincial Park and a few other things. He knew Edmonton.”

For a week at the end of June, the Rodriguez family went on Remy’s dream paleontological road trip, driving from Dinosaur Provincial Park in southern Alberta to the labs at the University of Alberta.

Remy is just learning how to read. While other five year olds are identifying simple conjunctions and determiners, Remy is reading the Greek-heavy names of dinosaurs off plaques at the Royal Tyrrell Museum.

“So he can read the name of the dinosaur, but he wants us to read the rest of the plaque to him, including, you know, when was the dinosaur alive? What did it eat? Where did they find this? Who found this?” she said.

One of the highlights of the trip was when Remy was toured through the halls of the university he’d come to idolize by real-life fossil expert, Gavin Bradley. 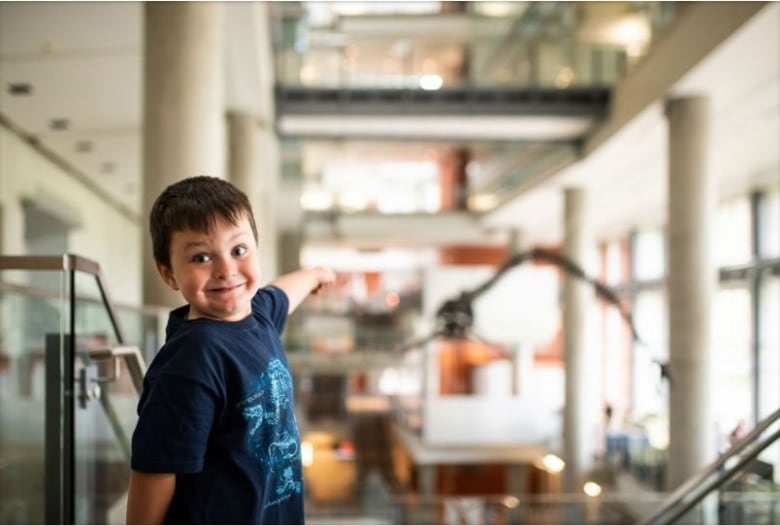 Remy Rodriguez points out the Elasmosaurus on display at the University of Alberta. (Dawn Graves)

“Remy was just in awe that, one, he was actually at the University of Alberta, and two, that he was actually talking to a real paleontologist that lives in Alberta,” Michelle said.

A group of graduate students was cleaning up equipment after the day’s field work when they got to the dino lab. Remy apparently stopped in his tracks, staring in awe at this group of paleontology scholars the same way another five-year-old might stare at The Wiggles.

“It was pretty adorable to see him looking at these people and he was just totally starstruck, it was pretty funny,” Michelle said.

To see Remy living his paleontological fantasy, to walk in the footsteps of giants and to search for the fossilized remains, was something Michelle said she’ll always remember.

“He was picking up these fossils and holding them in his hand . . . and coming up with this whole imaginary scenario about these dinosaurs,” she said.

“For Remy, he’s been imagining finding fossils and dinosaurs, and he finally gets there, and it’s even more amazing then he could imagine.” Some parents put pencil marks on the wall to mark how much a kid has grown. Michelle has a picture of Remy in a sunhat beside the sign at Dinosaur Park.

Michelle said she expects to be back in badlands of Alberta many more times.

And maybe they’ll take another picture in front of the Dinosaur Provincial Park. And then maybe another one as they drive him to the University of Alberta.

And then several years down the road, maybe Remy will swap the sunhat for a graduation cap in the picture, before hopping into the tow truck he dreamed about and drive to the next dig.