For many Canadians, Greyhound is the only ride out of town. That service will be no more in most of western Canada after October, but two Canadian bus companies say they want to fill part of the void. Maritime Bus and Kasper Transportation Service are convinced something can be done without government subsidies, but B.C. isn’t holding out much hope for remote rural routes.

If you live in Vancouver, Ottawa or Edmonton, you might be able to get your double-doubles delivered. Tim Hortons began testing a delivery service in the three cities this week as part of a larger effort to remain relevant to Canadian consumers. The coffee giant partnered with food delivery app Skip The Dishes for the pilot project and plans to expand the service.

Some Canadians hankering for coffee and doughnuts can now get their fixes at home after the chain launched food delivery with Skip The Dishes in select cities across the country. (Chris Young/Canadian Press)

Worried about contaminated meat at the grocery store? One day, a glance at the plastic packaging could let you know if it’s safe to eat. Researchers at McMaster University have developed a plastic patch that changes colour under ultraviolet light when it touches meat contaminated with E. coli. The patches also detect contamination in water and other liquids.

More from Marketplace: Testing the food you buy (2013).

Auto tariff and the price of a new car

If Donald Trump follows through on his threat of an auto tariff and Canada responds with a tariff of its own, the price of a new car could go up by $9,000. If that happens, the Canadian Automotive Dealers Association is recommending a “cash for clunkers”-style program that would encourage owners to trade in their older vehicles. 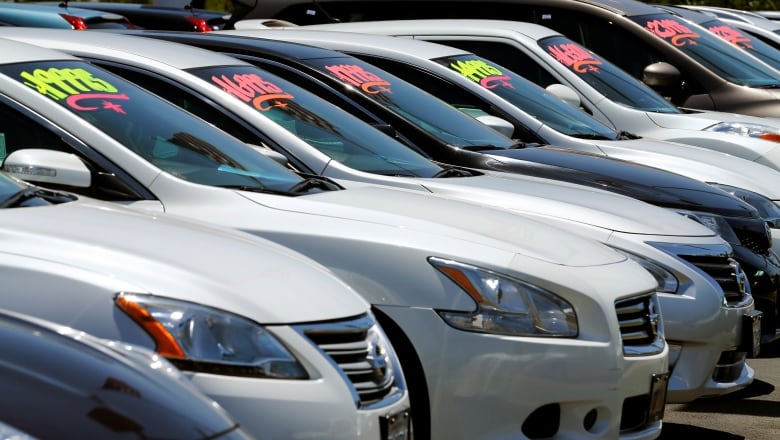 Retaliatory tariffs on American-made cars would add between $5,000 and $9,000 to the cost of a new car in Canada, according to the Canadian Automotive Dealers Association. (Reuters)

Starbucks plans to eliminate plastic straws from all its locations by 2020. The company will use strawless lids resembling sippy cups instead, along with biodegradable paper straws. The company is citing the environmental threat to oceans, but no changes are planned for Starbucks to-go cups.

Mustard dropped from Canada’s retaliatory tariff list. The industry feared the mustard tariff could have driven down prices for mustard seed exports to its biggest customer, but ketchup imported from the U.S. still faces a 10 per cent tariff.

This frozen berry blend could be contaminated with salmonella; these heart and high blood pressure drugs could contain a substance that can cause cancer; this baby wash could contain harmful bacteria; these transceivers contain a software error that could delay the search and rescue process of users; these bicycle carriers could cause a crash or personal injury; and this wood finishing oil and clear solvent don’t have proper chemical hazard packaging and labelling.

Our TV season has wrapped until the fall. Miss an episode? Watch Marketplace investigations on demand here. We are busy working on new stories and want to hear from you.  What do you think we should investigate next? Email us at marketplace@cbc.ca.