Hand-made, home-made, farm-to-table, grass-fed, free-range: the menu at Barney’s Pub & Grill in Leduc reads like a foodies’ answer to prayer. Bring on all that ethical, local, righteous rhetoric. We want to make good choices.

I don’t know what happened on the way from the menu to the kitchen to the table, but Leduc, we have a problem.

The grass-fed burger that so enticed me with its description was covered in bland cheese with no trace of applewood or smoke as described, and the “candied bacon” lacked in proper cooking — or candying of any note.

By the time I sunk my teeth into the mayo-slathered, made-in-house beef patty, I couldn’t tell if the cattle had been grass-fed, hand-fed or fed at all. Too bad really, because the patty itself was thick and nicely cooked.

It may have been the best thing I ate on two visits. The tempura roll certainly wasn’t.

The rice paper roll containing gochujang-flavoured pulled pork, nori, rice, and pickled vegetables is suffocated under heavy-handed squiggles of wasabi aioli and sriracha sour cream. The result was an unpleasant taste of oil and fish-flavoured pork.

A grilled romaine caesar salad using the heart of the leafy head sounded lovely. I appreciated the extra step taken to make this salad stand out from run-of-the mill caesar salads everywhere else, so when the plate of non-grilled, chopped leaves was placed before me, I was a bit disappointed. The salad was heartless.

The server’s promise of pork belly instead of regular bacon bits had me hoping, though, that not all was lost.

Hopes dashed again: the pork belly bits were tough and tired, just like the house-made croutons. Thankfully, the leaves were covered in a generous amount of dressing.

I get happy when cooks don’t skimp on the dressing, but my happiness did not last long. A common theme was developing in the food — that being a very pervasive, bitter oil theme. Not pleasant.

The copious amount of dressing that I had been so initially happy to see got scraped off the leaves and eventually just abandoned completely.

It ruined the lemon-infused dressing in the regular house salad, too, and it did nothing for the deep-fried pickles—not to mention the number it did on that that tempura roll.

By now, I didn’t care about carbs and the fact that so many menu items are deep-fried. I was hungry and I needed food to help wash down the wine-from-a-tap I chose from the beer wall.

Note: choose beer from a beer wall. Not wine.

Meat, cheese and bread are the three pillars of pub food. Surely pizza would save the day. 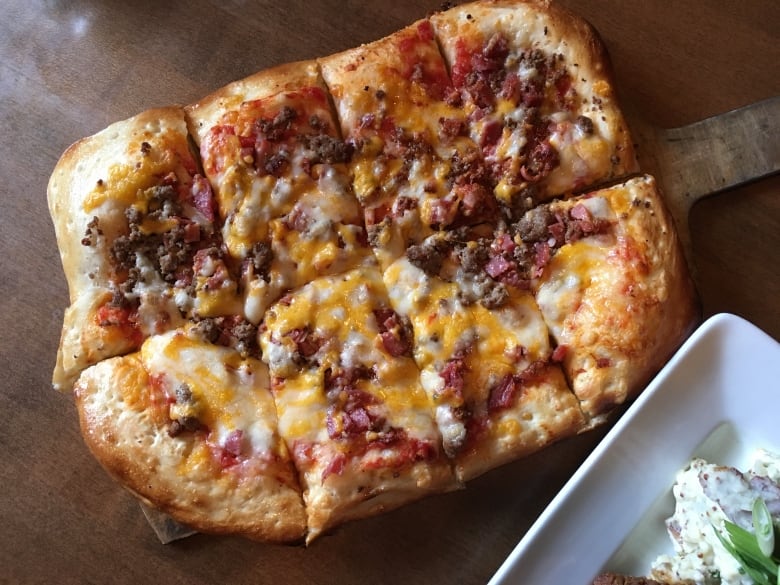 Heavy on ham, salami and sausage, the cowboy pizza was a hit. (Twyla Campbell/CBC)

The cowboy pizza arrived with a nicely charred crust topped with a hefty helping of ham, salami and sausage under a melty blanket of blended cheese. Yeehaw. That’s what I’m talking about.

Barney’s has some serious fixin’ to do with their menu and house-made items.

My recommendation would be to avoid anything to do with deep-frying or items that contain oil. Unfortunately that means nearly half the menu.

In the meantime, there is that wall of beer.

You can hear Campbell’s reviews on Edmonton AM every second Friday. You can also see more of her reviews on her blog, Weird Wild and Wonderful, and can follow her on Twitter at @wanderwoman10.