BMX rider Daniel Dhers is a long way from home, but the Venezuelan athlete says he likes coming to Edmonton where his sport has a huge following.

Edmonton is hosting the Festival International des Sports Extrêmes (FISE) World Series starting Friday at Louise McKinney Park near the Shaw Conference Centre. In its first two visits to Edmonton, in 2016 and 2017, FISE was held at Hawrelak Park.

This year’s “world action sports festival” will feature three days of skateboard, BMX flatland, BMX freestyle and scooter freestyle competition. It gets going Friday morning and wraps up Sunday evening. Admission is free. Click here for information on how to get there.

Dhers, 33, is one of the best professional BMX freestyle park riders in the world.

His goal is to keep on winning competitions, but ultimately he wants to compete for gold when BMX makes its debut at the 2020 Olympics in Tokyo.

“I think the Olympics definitely helps the sport to be legitimized.”

For others, the event will mark the first time they’ll be making jumps and moves in front of a huge crowd.

Amateurs are encouraged to sign up and compete too.

Teaching young riders how to do tricks properly is something 20-year veteran Alex Jumelin takes pride in.

“It’s really about learning the fundamentals,” said Jumelin, whose style has influenced a new generation of riders.

“They save time, they learn way faster than most of the people who learn riding by themselves in the street.”

Event organizers say many more women are competing this year.

Analia Zacaria, 28, is a BMX freestyle rider from Argentina.

She is one of 25 women competing this year, compared to just nine in 2017.

“The many girls around the world doing this sport is beautiful,” said the freestyle rider who started the sport at the age of 18 after seeing it on TV.

“I think women feel that we can do what we want it’s not just a sport for men.”

“Many years ago only five girls were competing, and this year in Montpellier there [were] 31 girls.” 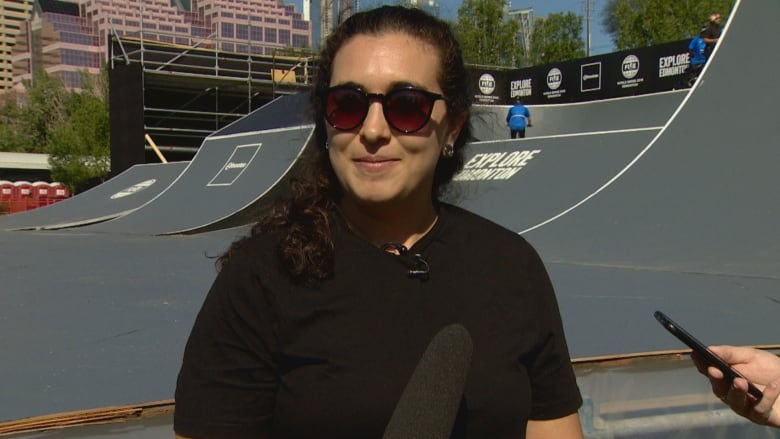 And that number will only continue to climb according to organizers, especially with the sport being recognized by the International Olympic Committee.

This year’s FISE World Series launched in March in Jeddah, Saudi Arabia with stops in Japan and France.

After Edmonton, the only North American stop, there are two more events in the fall, in Budapest, Hungary and Chengdu, China.