Listen in weekly on CBC Radio’s Edmonton AM for the latest episode, and for a little excavation of Edmonton history with architect Darrel Babuk.

It has survived floodwaters and served commuters for over a century, as the city transformed from a rough pioneer town to booming metropolis.

Of the all bridges that now cross the North Saskatchewan River, the Low Level Bridge was the first.

Completed in 1900, the span of steel, originally known as the Edmonton Bridge, began as a critical link for early residents of Edmonton.

The role of the bridge has changed constantly over the decades. The sturdy structure was adapted countless times to meet the city’s ever changing transportation needs.

A railway line was added to the bridge in 1902. Streetcars used the bridge from 1908 to 1939 when they were replaced by trolley buses, which were eventually eclipsed by vehicle and pedestrian traffic.

“The Low Level Bridge brought the first train to Edmonton. It also brought horse carts, streetcars and eventually motorcars to Edmonton,” said architect Darrel Babuk in an interview with CBC Radio’s Edmonton AM.

“It truly connected Edmonton and Strathcona.”

Arguably, the span’s most harrowing day came during the floods of 1915, one of the worst natural disasters in Edmonton history.

Days of heavy rain caused the river to rise a staggering 10 metres, washing away hundreds of homes and riverfront properties.

As floodwaters peaked, Canadian Northern Railway crews sprung into action, parking train cars loaded with sand across the bridge to prevent it from being washed away too.

Engines were ready on each side to pull the cars off the bridge if the structure was swallowed up by the river.

The plan worked and rail workers received a formal thanks from the mayor for their “self-sacrificing spirit” in rescuing the bridge from certain disaster. 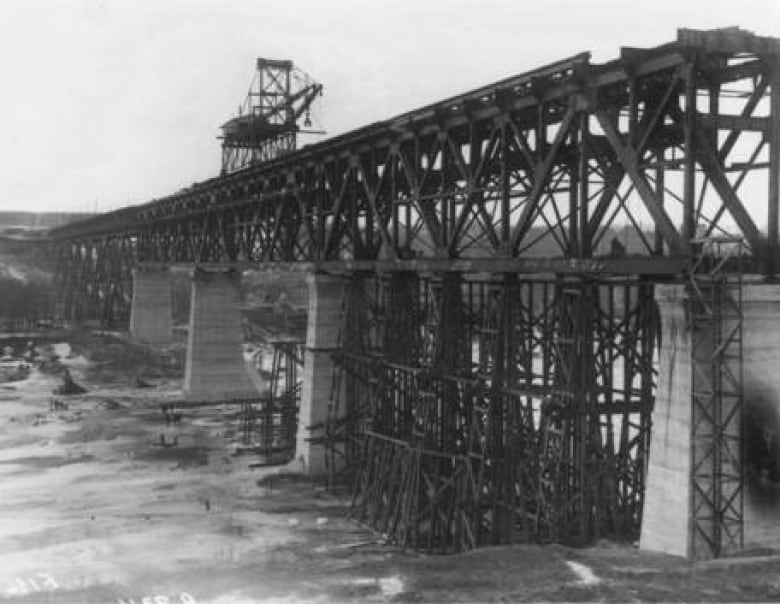 The High Level Bridge across the North Saskatchewan River. (City of Edmonton Archives)

‘We should be proud of it’

Even though High Level Bridge is the younger of Edmonton’s twin rail bridges, it is the real gem of Edmonton’s riverfront, Babuk said.

The massive steel truss bridge sits more than 55 metres above the North Saskatchewan River and is more than 775 metres long.

Babuk said the iconic bridge is an engineering marvel.

“I think, among the bridges that were built at this point in history, this ranks as one of the great ones.

“We should be proud of it.”

Before the backbreaking — and dangerous — construction work  was completed in May 1913, local commuters relied mostly on ferries to travel between Edmonton and Old Strathcona, he said.

It was designed by the Canadian Pacific Railway to accommodate rail, streetcar, automobile and pedestrian traffic and remains remarkably unchanged.

While trains no longer run across the bridge, a seasonal streetcar still runs along the tracks and hundreds of vehicles travel across it every day.

The bridge has withstood the test of time and it’s rugged beauty still has the power to impress modern commuters more than a century after it was erected, Babuk said.

“Just that long passage as you’re driving down here through that shady corridor, it’s a pretty cool space.

I hope you’re not afraid of heights. We go to the highest point over the river to bring you a story of Edmonton’s history, as we continue our summer architecture series. 4:54