The top border enforcement official in the U.S. acknowledged Monday that authorities have abandoned, for now, their effort to prosecute immigrant families who cross the southern border after the president ordered an end to the separation of parents and children.

The comments by Customs and Border Protection Commissioner Kevin McAleenan came shortly after Attorney General Jeff Sessions defended the administration’s tactics in a speech in Nevada and asserted that many children were brought to the border by violent gang members.

Together, their remarks added to the nationwide confusion as mothers and fathers struggled to reunite families that were split up by the government and, in many cases, sent to detention centres in different parts of the country.

McAleenan and Sessions insisted that the administration’s “zero-tolerance” policy remains in effect, but the cases cannot be prosecuted because parents cannot be separated from their children. The commissioner said he is working on a plan to resume prosecutions.

Speaking at a school-safety conference in Reno, Sessions cast the children as victims of a broken immigration system and urged Congress to act.

While hundreds of protesters rallied outside a hotel-casino, the attorney general said more than 80 per cent of children crossing the border arrive alone, without parents or guardians, and are “often sent with a paid smuggler. We can only guess how many never make it to our border during that dangerous journey.”

He claimed the MS-13 gang “is recruiting children who were sent here as unaccompanied minors, and some are brought to help replenish the gang. And they are terrorizing immigrant schools and communities from Los Angeles to Louisville to Long Island to Boston. They are able to do so because we do not have a secure southwest border.”

He said five children had been found at the border carrying a combined 16 kilograms of fentanyl, the powerful synthetic opioid drug blamed for an epidemic of overdose deaths nationwide.

Drug cartels, Sessions said, “take advantage of our generosity and … use children to smuggle their drugs into our country as well.”

Just outside the building where Sessions spoke, more than 200 protesters opposed to the administration’s immigration policies blocked a busy road. The coalition of civil rights, religious and union activists carried signs and drums and were joined by a mariachi band. Some sat in a busy roadway for while police diverted traffic around them.

No arrests were immediately reported.

The president had a similar message Monday during a press event with the king of Jordan. Trump said the U.S. needs “sensible” new immigration laws — but also criticized a bill that would attempt to address the influx of migrants by hiring more judges.

Sarah Sanders was asked about Trump’s figure of 5,000 new judges on Monday.

WH spokesperson says ‘there have been a number of different proposals’ 0:19

The president did not say how exactly he wanted things to change beyond a call for strong borders and no crime.

“We want a system where if people come in illegally, they have to go out,” Trump said. “A nice, simple system that works.”

The president also said the executive order he recently signed ending separation in favour of family detention was “great” and something “that I felt we had to do.”

McAleenan’s remarks follow an announcement last week by the federal public defender’s office in El Paso that federal prosecutors would no longer bring criminal charges against parents entering the U.S. if they have their child with them.

Amid the confusion, some Democratic members of Congress reiterated their frustrations Monday that the Trump administration had not released its plan for reunifying families.

Sen. Richard Blumenthal of Connecticut was among those who toured a shelter at the Tornillo border crossing in West Texas.

“I think there is very, very powerful consensus on both sides of the aisle that reunification should be done immediately,” Blumenthal said. “These stories are gut-wrenching and heartbreaking of children six and seven years old, separated from their parents, not know where they are and the parents not knowing where their children are.”

As many as 2,300 children were separated from their migrant parents from the time the administration adopted the zero-tolerance policy until June 9, officials have said. 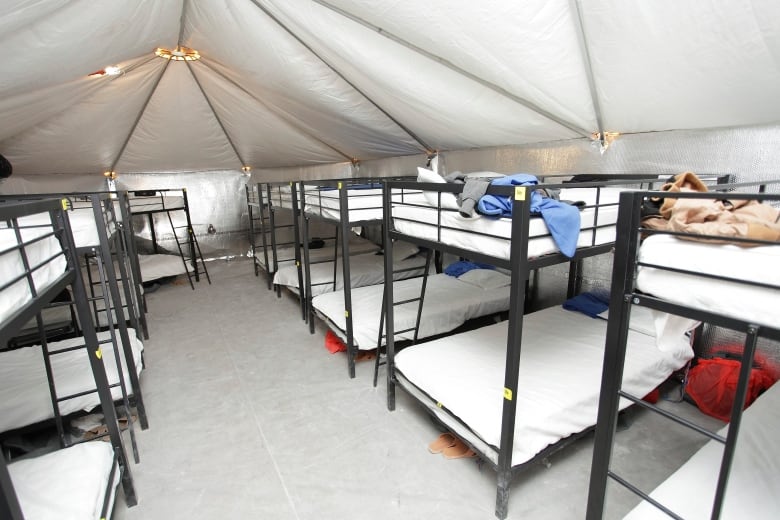 The temporary shelter at Tornillo was close to its 360-person capacity. Reporters were allowed Monday to briefly visit the shelter, where more than 320 children ages 13 to 17 are being held in air-conditioned tents. A facility administrator told reporters that the main complaint he hears from children on site is that the tents get too cold sometimes.

About half were from Guatemala, and 23 of the children had been separated from adults who accompanied them across the border.

Reporters were not allowed to enter any tents holding children. Two girls who stopped briefly in front of reporters said that they were doing well.

On Sunday, more than 30 immigrant parents separated from their children after crossing the U.S.-Mexico border were freed into the care of a Texas charitable organization, the group said, but the parents don’t know where their kids are or when they might see them again. The release was believed to be the first, large one of its kind since Trump signed an executive order that preserved a “zero-tolerance” policy for entering the country illegally but ended the practice of separating immigrant parents and children. 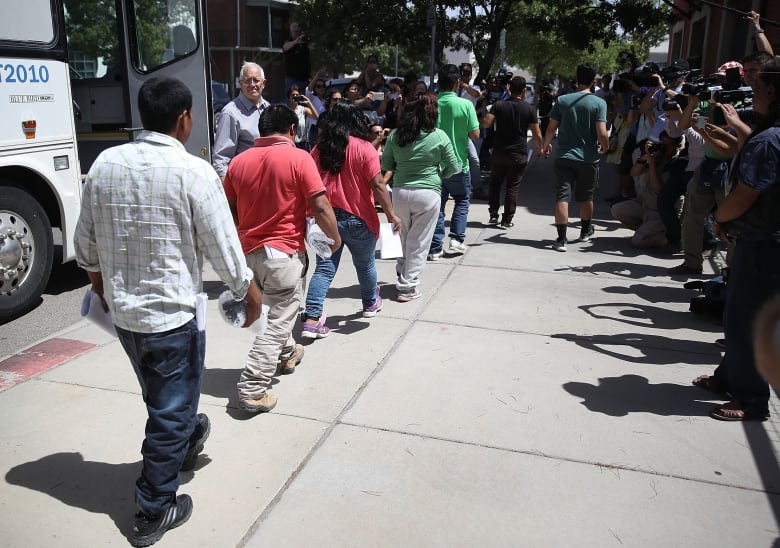 Migrant parents, all of whom were separated from their children by U.S Customs and Border Patrol, arrive at a shelter after being released from in El Paso, Texas. The 32 parents that arrived had faced charges for illegal entry into the United States and will continue with the legal process as they wait to be reunited with their children. (Joe Raedle/Getty Images)

The exact process to reunite families has been unclear because migrants are first stopped by Customs and Border Protection. Then children are transferred to the custody of the Department of Health and Human Services, while adults are detained through Immigration and Customs Enforcement, which is under the Department of Homeland Security. Children have been sent to far-flung shelters around the country, raising alarm that parents might never know where their children can be found.

Justice Department officials have asked a federal judge to amend a class-action settlement that governs how children are treated in immigration custody. Right now, children can only be detained with their families for 20 days. Trump officials are seeking to detain them together indefinitely as their cases progress. Advocates say family detention does not solve the problem.