The federal government has launched an investigation into allegations some members of a Yarmouth, N.S.-based organization are using their “Métis cards” to get tax breaks on everything from gas to big-ticket items like snowblowers and vehicles.

The probe by Indigenous Services Canada follows criticism on social media of Eastern Woodland Métis Nation Nova Scotia, and accusations it had encouraged its members to use their cards “illegally.”

The allegations were made over Twitter by Saint Mary’s University associate professor Darryl Leroux, a critic of what he’s called “new Métis” and the sudden proliferation of self-reported Métis in Eastern Canada.

It was posted following a CBC News investigation into a suspected tax scam in central Canada involving cards issued by the Confederation of Aboriginal Peoples of Canada.

Only people who are registered as Indians, hold a federal-government issued Indian status card, and live on a reserve are entitled to HST breaks on purchases.

But the grand chief of the Eastern Woodland Métis Nation Nova Scotia, Mary Lou Parker, acknowledges she’s heard some of members of her group are buying items tax-free with identification cards issued by the organization.

The organization was established in 1973 and says it now has 30,000 members. While Parker says the group’s card does not say it’s for tax exemption use, she’s not opposed to members using it for that reason — and feels if any laws are being broken, it’s by the retailer.

“We’re telling them to show the card that they are Métis, and if the proprietor wants to accept that card and give them a break, it is entirely up to the proprietor, and I’m OK with that,” says Parker.

The organization is separate from the Métis National Council, a group with governing members in Ontario, Manitoba, Saskatchewan, Alberta and B.C., and which signed a nation-to-nation accord with the federal government.

CBC News has requested a copy of an Eastern Woodland Métis Nation Nova Scotia membership card, but it has not been provided.

The meeting minutes say members have shown their cards and “didn’t have to pay taxes” on a snowblower at Eastern Turf locations in Dartmouth and Stewiacke, and on vehicles at O’Regans, Race Auto and Yarmouth Kia.

The document also says tax-exempt gas has been purchased at Treaty Gas, which is owned by Millbrook First Nation. 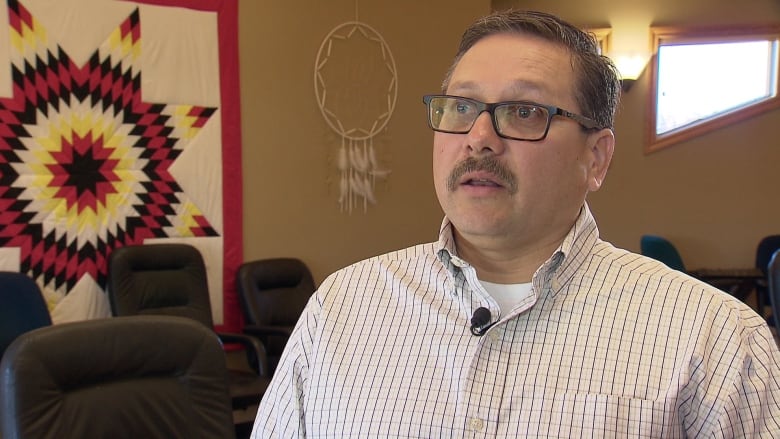 The Indigenous Services department says its investigation into whether the Eastern Woodland Métis group was “mistakenly advising” members to obtain benefits intended for people with Indian status is still in its early stages.

No “cease and desist letter” is being issued while the assessment is being carried out, Indigenous Services spokesperson Edith Pedneault said in a statement.

But the situation has long been on the radar of Millbrook Chief Bob Gloade, particularly the claim that HST-free fuel has been purchased by Eastern Woodland Métis members at the band’s Treaty Gas station in Cole Harbour. In fact, the cards are rejected at the gas station. 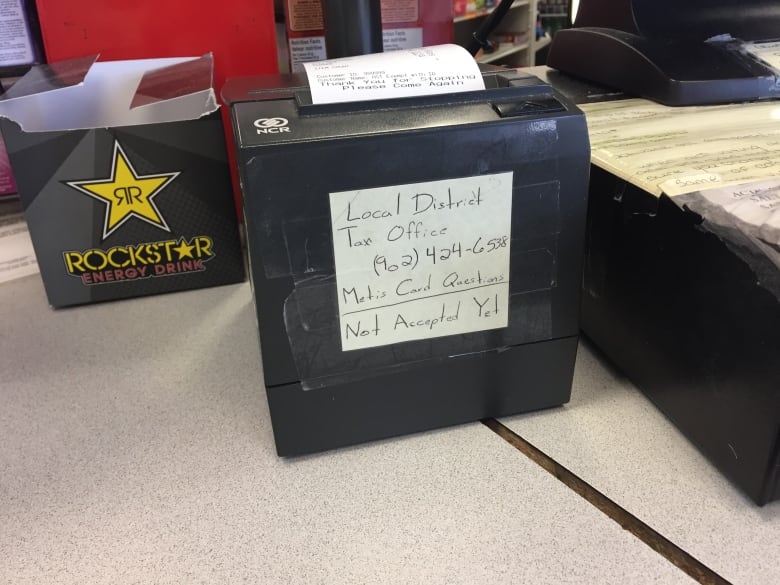 He said Indigenous-rights holders are entitled to only “a few benefits.”

At Treaty Gas, a handwritten note taped to the credit card receipt machine states: “Metis Card Questions. Not Accepted Yet,” along with the number for the Provincial Tax Commission.

Gloade said he’s not taking a position on whether they are Indigenous — but he said they are not treaty rights holders.

Given the ongoing challenges Mi’kmaq encounter, he said it’s “frustrating” the Eastern Woodland Métis are taking advantage of the limited opportunities that exist for rights holders. “Let’s jump on that and try to get benefit,” is how he assesses the situation.

“You can’t print what I’d like to say,” she said. “We’re not after their money, we’re not poor people. We are not a hands-out organization, we are a hands-up organization.”

In Dartmouth at Eastern Turf, a construction and farm equipment retailer, staff are surprised to hear the company is named as one that honours Métis cards.

On its most expensive snowblower, which sells for $2,800, uncollected tax would be $420. The retailer is going through its records to verify whether it has in fact sold machines to members of Eastern Woodland Métis Nation. 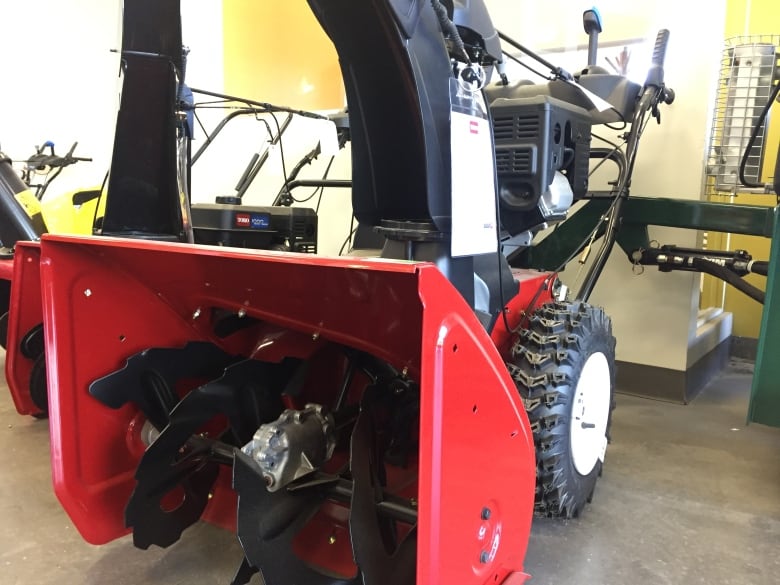 Eastern Turf’s most expensive snow blower costs $2,800. If the company did not collect HST on it, the tax break is $420. (Elizabeth Chiu/CBC)

For Ron MacLeod, who works in sales, a tax-free transaction would be an “honest mistake” about not knowing Métis ID cards are not a substitute for Indian status cards.

He said in the last eight years, staff have only completed perhaps 10 sales to Indigenous customers.

He said staff would have followed standard procedure: photocopy the card presented, and attach it to the sales slip in case the books are audited.

MacLeod believes staff were “handed a piece of information that has shown that legally it looks correct” and they processed the sale as they would normally for registered status Indians. MacLeod said staff will now be trained on how to identify correct cards and “bad cards.”

And he says if Eastern Turf is on the hook for uncollected taxes, the company will swallow the loss.

He’s not impressed that the company is being mentioned as place to go for Eastern Woodland Métis tax breaks. Though the company is sales driven, “we want to do it in the right way. We don’t want to use other people’s cards that are wrong.” 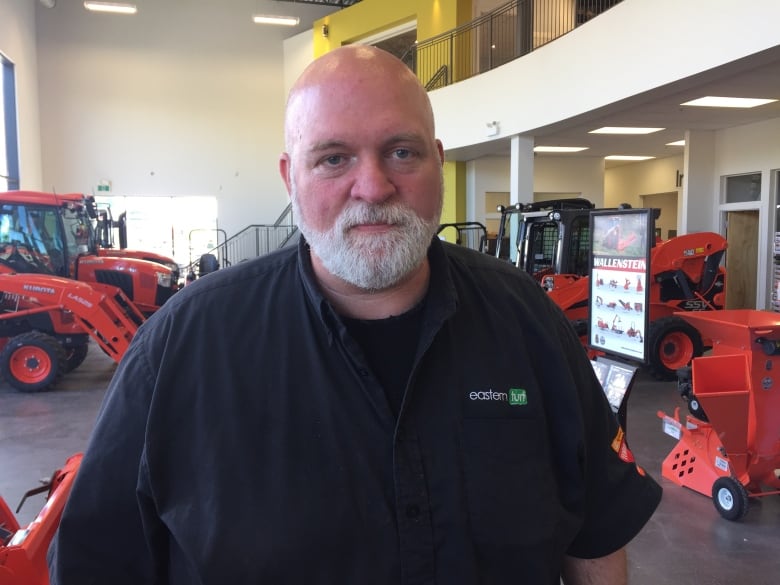 Ron MacLeod is in sales at Eastern Turf in Dartmouth. (Elizabeth Chiu/CBC)

One retailer that hasn’t been caught up in the Métis benefit controversy is located in the main stomping grounds of the Eastern Woodland Métis.

At Yarmouth Kia, sales manager Marsha Deveau says at least once a month a potential customer asks about a tax break for Métis members, but staff are aware of the rules. “Most feel as though they should able to purchase as a status Indian can, but they do understand that it’s out of my control.”

At Race Auto in Dartmouth, sales manager Joey Beazley says he’s had to turn away Métis card-bearing customers, and has “caught” potential sales to Métis customers before they were completed.

O’Regans, one of the largest automotive groups in the region, did not agree to an interview. But the vice-president of marketing and communications, Susan Johnston, issued a statement that said the company follows tax laws and trains staff to ensure that anyone who’s eligible for a tax exemption receives it, and “anyone who is not does not.” 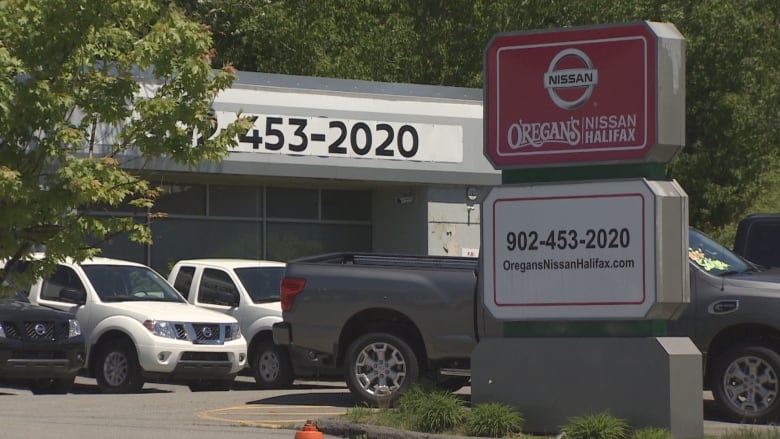 O’Regans is one of the three auto retailers mentioned during a meeting of the 2016 Eastern Woodland Métis Nation Nova Scotia as places were members “have not had to pay taxes.” (Dave Laughlin/CBC)

Retailers who are “knowingly or willfully accepting a false card” that is not a Indian status card may be charged with an offence under the Excise Tax Act and hit with a penalty.

But for vendors who “erroneously relied [on identification provided] in good faith,” the Canada Revenue Agency would use the example to educate instead of assessing them for uncollected tax, CRA spokesperson Etienne Biram said in a statement.

However, the purchaser could end up in hot water. Knowingly using a card that is not an Indian status card may result in a fine and up to six months in jail.

Suspicion about tax-law violations is a concern for Parker, who says her own Mi’kmaq and Passamaquoddy heritage goes back four generations.

But she says her group is “more Métis” than the Métis Nation in Western Canada, and she wants that recognized.

“I think that we should be entitled to tax-free anyway because we are Aboriginal. We are the first Aboriginals,” she says.

That view is “an insult” to Gloade. “There’s one tribe here in Nova Scotia and that’s the Mi’kmaq of Nova Scotia,” he says. The Métis are “not the original people to this territory.”