Ayrial Miller is clearly annoyed. Her mother is sitting with her on the couch in their Chicago apartment, scrolling through the teen’s contacts on social media.

It’s a friend of a friend, Ayrial says. They haven’t talked in a while.

Yes, Bivens is one of “those moms,” she says. She makes no apology.

Nor should she, says a retired cybercrimes detective who spoke to her and other parents in early June at Nathan Hale Elementary School, a K-8 public school in Chicago.

“There is no such thing as privacy for children,” Rich Wistocki told them.

Other tech experts might disagree. But even they worry about the secret digital lives many teens are leading, and the dreadful array of consequences — including harassment and occasional suicides — that can result.

Jennea Bivens, Ayrial’s mom, uses an app called MMGuardian, one of several available, to manage and monitor her 13-year-old daughter’s phone use. She turns off certain apps, sometimes as punishment, and monitors texts. (Martha Irvine/Associated Press)

Today’s kids are meeting strangers, some of them adults, on a variety of apps. Teens are storing risqué photos in disguised vault apps, and then trading those photos like baseball cards.

Some even have spare “burner” phones to avoid parental monitoring, or share passwords with friends who can post on their accounts when privileges are taken away.

David Coffey, a dad and tech expert from Cadillac, Michigan, said he was floored when his two teens told him about some of the sneaky things their peers are doing, even in their small rural town.

“I gotta hand it to their creativity, but it’s only enabled through technology,” says Coffey, chief digital officer at IDShield, a company that helps customers fend off identity theft.

It’s difficult to say how many kids are pushing digital boundaries this way. But academics, experts like Wistocki and Coffey, and many teens themselves say it’s surprisingly common for kids to live online lives that are all but invisible to most parents.

Exposed to tablets and smartphones at an increasingly early age, kids are correspondingly savvier about using them and easily share tips with friends. Parents, by contrast, are both overwhelmed and often naive about what kids can do with sophisticated devices.

Wistocki often holds up a mobile phone and tells wide-eyed parents that giving a kid this “ominous device” is like handing over the keys to a new Mercedes and saying, “Sweetheart you can go to Vegas. You can drive to Texas, Florida, New York, wherever you want to go.” 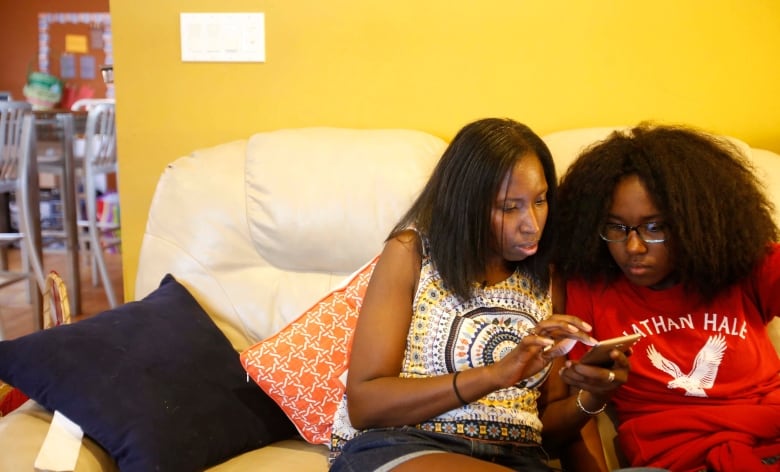 Jennea Bivens, left, talks with her 13-year-old daughter, Ayrial Miller, about the contacts in her Snapchat social media account while sitting on the couch in their Chicago apartment, Monday, June 18, 2018. (Martha Irvine/Associated Press)

In January, two 12-year-olds were arrested in Panama City Beach, Florida, for cyberstalking that police said led to the suicide of a classmate named Gabriella Green, who’d been repeatedly bullied.

Last year in Naperville, a 16-year-old killed himself after police discovered that he’d recorded himself having sex with a classmate and then shared the recording with his hockey teammates. While searching his phone, they also found photos of other partially nude girls in a secret photo vault app disguised as a calculator.

And yet, Wistocki says, too often parents remain in denial with what he calls “NMK — not my kid.”

Bivens, Ayrial’s mom uses an app called MMGuardian, one of several available, to manage and monitor her 13-year-old daughter’s phone use. She turns off certain apps, sometimes as punishment, and monitors texts.

“It’s a full-time job,” Bivens concedes. “People laugh at me because I monitor her stuff. But I don’t have the same problems as other people do.”

A 2016 Pew Research Center survey found that only about half of parents said they had ever checked their children’s phone calls and text messages or even friended their kids on social media.

Tech experts agree that monitoring makes sense for younger kids. But Pam Wisniewski, a computer-science professor at the University of Central Florida, suggests a gradual loosening of the strings as teens prove they can be trusted.

“I’m almost to the point where I feel like the world would be better off without social media,” says Wisniewski, who studies human computer interaction and adolescent online safety. “But I’m also a pragmatist.”

Wistocki tells parents to offer their children the “Golden Ticket” — no punishment when they come to them about mistakes they’ve made online or help they need with a social media problem. 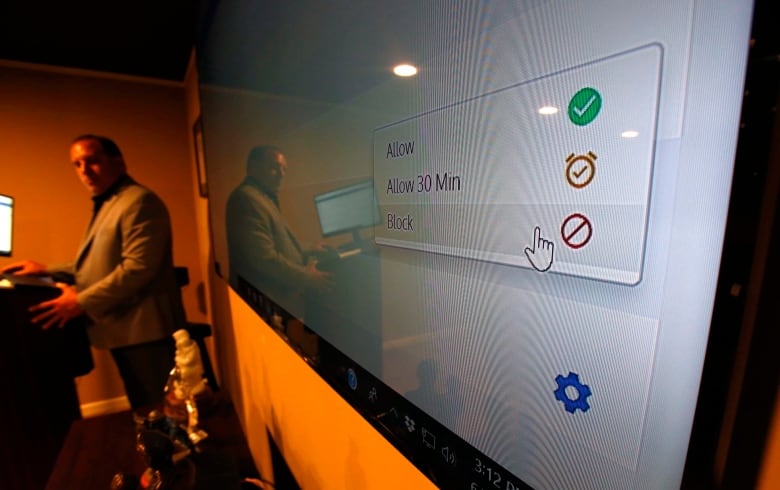 Rich Wistocki, a retired cybercrime detective who now consults with and trains educators, parents, kids and law enforcement on digital safety, demonstrates a parental monitoring app at his webcasting studio in Lockport, Illinois, on Tuesday, June 5, 2018. Wistocki, now head of Be Sure Consulting, says all parents should put monitoring apps on their kids’ phones. (Martha Irvine/Associated Press)

Ayrial’s mom is all for that. Recently, Ayrial started a live videostream on Twitter and encountered a stranger who asked her to show her bare feet. It was a “creepy” request, the teen said, that caused her to end the connection quickly.

She had sidestepped a block on social media by using a tablet. But she did tell Mom what happened soon after.

Ayrial still isn’t happy that her mom is going through her contacts with her. The soon-to-be eighth-grader appreciates that “she cares about me,” but hopes Mom will eventually “back up” a bit.

If Mom doesn’t give her that space, she says, she’s always coming up with new tricks to get online secretly, just as her friends do.