If you want to trigger a strong response from theatre folk, ask them how they feel about trigger warnings: The debate about if and when to use them has the theatre community deeply divided.

These new type of audience advisories warn of specific plot points that may provoke psychological trauma in some audience members.

But some theatre professionals worry these warnings strip theatre of its power to provoke an emotional reaction and are a form of self-censorship.

James MacDonald, artistic director of Western Canada Theatre in Kamloops, B.C., is in favour of using trigger warnings where the material justifies it.

“I think if we inform the audience beforehand, and they’re not blindsided by it, then they don’t have a negative reaction to it,” MacDonald said from Gananoque, Ont., where he was rehearsing a new play.

MacDonald realized a need for trigger warnings after his company staged a play that featured a scene of a daughter being sexually abused by her father.

“Even though we had put a content warning on the play to say that there was adult content and scenes which may disturb people, that particular scene evoked many reactions and responses from the audience, and they felt like they were blindsided by it,” he said.

“And in thinking about it, we realized that that is a specific thing that does not necessarily fit into a general audience advisory.”

This spring, Western Canada Theatre attached a warning to Children of God, a musical about residential schools, that indicates the production’s “mature and potentially triggering scenes involving residential schools and sexual abuse.”

A subsequent production, Armstrong’s War, a play about an Afghan War vet, came with the following advisory: “This hard-hitting yet inspiring drama about bravery and survival contains some potentially triggering content about the horrors of war and mental illness.” 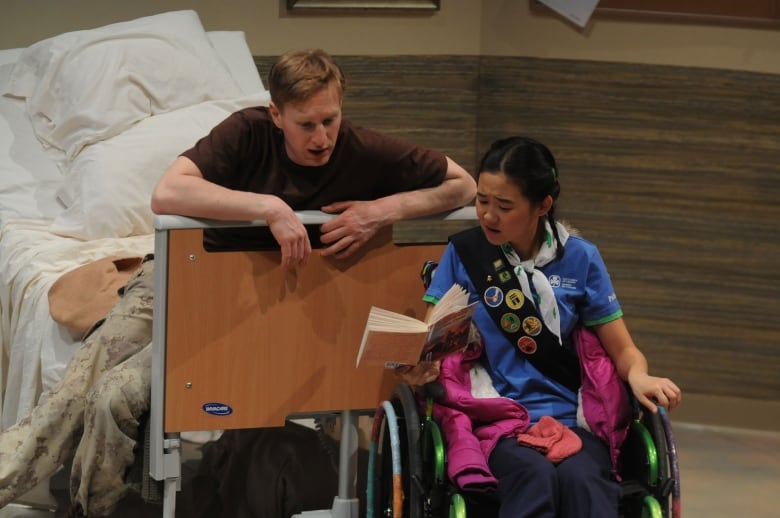 MacDonald is not alone in the debate over trigger warnings. For theatre companies around the world, the need for more explicit advisories comes on the heels of a trend toward more explicit content — and the resulting outcry.

In England, graphic, realistic violence onstage has become de rigueur, perhaps best exemplified by Shakespeare Globe’s infamous 2014 staging of Titus Andronicus. The audience found the production so distressing that people were fainting in the aisles almost every night.

By 2017, some of the country’s most storied companies — like Royal Court Theatre — started carrying a generic trigger warning on their websites. Royal Court’s urges audience members to call ahead and discuss what they will see with the theatre staff. 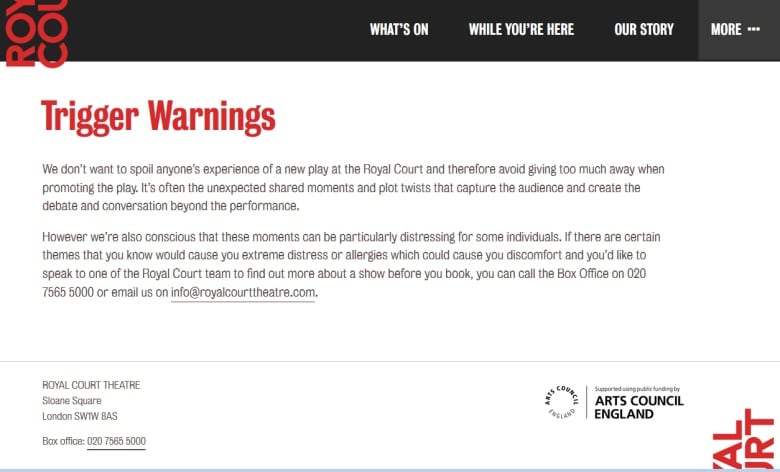 In Niagara-on-the-Lake, Ont., the Shaw Festival is moving away from its quaint roots toward edgier, more provocative fare, including this year’s sought-after ticket: the one-man play Mythos by British provocateur Stephen Fry.

But their playbills still feature the traditionally worded advisories that speak of “mature content” or “sexuality” and then suggest the appropriate age of viewers. 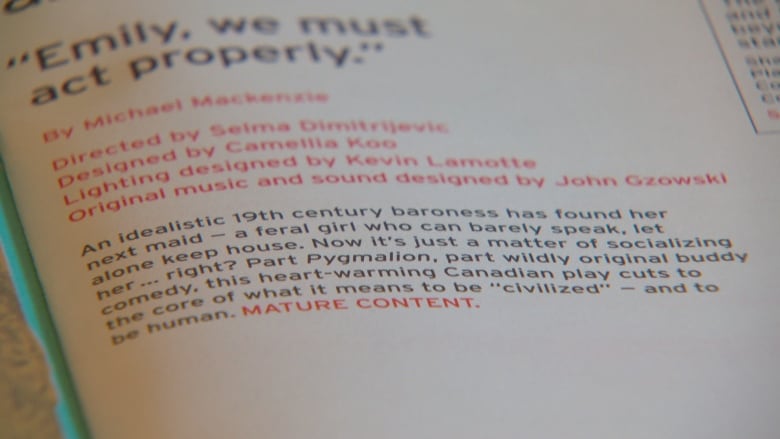 Shaw Festival uses more traditional audience advisories, like this ‘Mature content’ warning on its summer 2018 staging of The Baroness and the Pig (Derek Hooper/CBC News)

To go beyond that would be irresponsible, according to Tim Jennings, Shaw Festival’s executive director.

“I don’t expect — nor would I think any of us in the theatre world have an expertise — to be able to tell you, like a doctor would, what the psychological impact of a moment in a play is going to be on a viewer,” said Jennings.

For other theatre professionals, trigger warnings are the very antithesis of what theatre is designed to do: provoke reactions.

Montreal’s Imago Theatre specializes in English-language plays written from women’s perspectives and often features plays about challenging subject matter, like rape and violence against women. But there isn’t a trigger warning anywhere in sight. 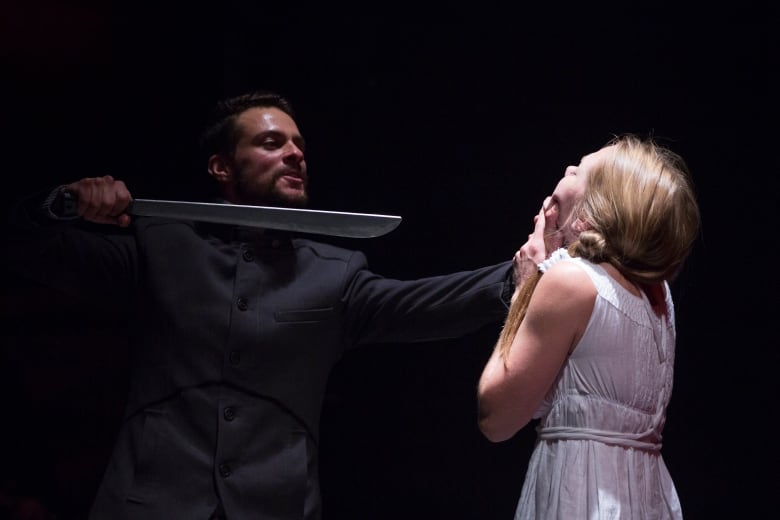 Nico Racicot, left, and Amelia Sargisson in the 2013 Imago Theatre production of If We Were Birds. The Governor General Award-winning play by Erin Shields examines sexual crimes against women committed during wars. (Tristan Brand/Imago Theatre)

“I think we have to be careful with trigger warnings. I’m not a fan of wanting to tell somebody exactly everything they’re about to experience,” said Imago’s artistic director Micheline Chevrier.

She worries trigger warnings are the first step toward avoidance of difficult material altogether, a slide into self-censorship by playwrights and directors afraid of offending patrons.

“I think we will always have some kind of reaction and I think that’s great. In fact, reaction is what we’re looking for — whether people feel it was inappropriate or appropriate — and then that debate can occur.”

Paradoxically, Western Canada Theatre’s James MacDonald agrees with that point. But, he feels that being proactive and including trigger warnings is the very way to avoid self-censorship.