The idea is to triple the amount of bitumen the pipe can carry from Alberta’s oilsands to the B.C. coast. The project has the support of the federal government, which believes the pipeline is critical to the future of the country.

Environmentalists, on the other hand, worry it is an ecological disaster waiting to happen.

The National sent reporter Nick Purdon and producer/videographer Leonardo Palleja to drive the pipeline route from Edmonton to Vancouver and talk to the people who live along it to find out what’s at stake for them and their communities.

Clarence Shields’ natural habitat is behind the giant wooden bar at Blackjack’s roadhouse — a kind of unofficial union hall for oilpatch workers.

The bar is a stone’s throw from the beginning of the Trans Mountain pipeline. Shields owns the place. 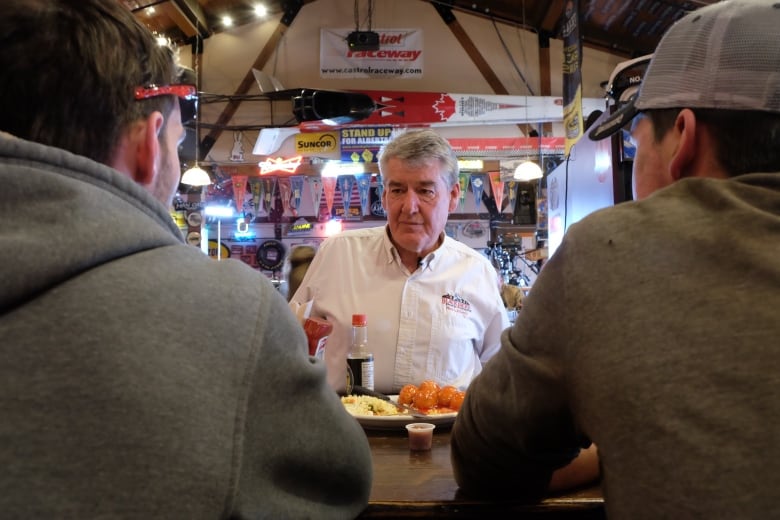 If we don’t have access to our resources we’re going to be a have-not country. That’s what scares me.– Clarence Shields

Shields’ view is that oil powers the country, and all Canadians benefit from getting it out of the ground.

“This is really the economic future of the next generation. If we don’t have access to our resources, we’re going to be a have-not country.

“That’s what scares me.”

Clarence Shields, who has had businesses near Canada’s largest oilfield park, says the Trans Mountain pipeline is ‘so important for the economic future of this country’ 0:57

Todd Noble, 46, has worked at the Jasper Skytram (the highest and longest in Canada) for 22 years — today he’s the general manager.

Even though Noble has made the seven-minute journey and stepped out on the lookout located 2,277 metres above sea level more times than he can count, he says the beauty of Jasper National Park still astonishes him. 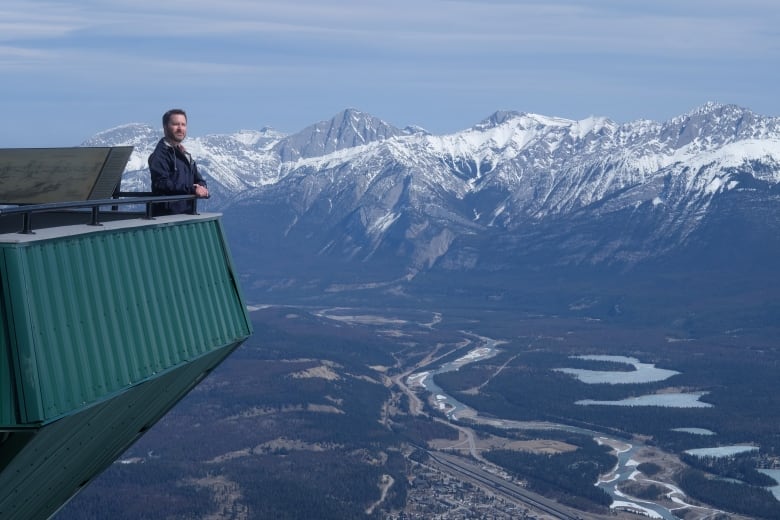 In 2008 when Kinder Morgan upgraded its existing pipeline in Jasper to increase its capacity from 260,000 barrels per day to 300,000 bpd, the company impressed Noble.

It’s not such a scary thing to think about.– Todd Noble

“They were in and out of here quite smoothly, no issues,” he says. “The impact on the area was minimal. Face value, it can seem a little disturbing, but having experienced it before and how they managed the area, it’s not such a scary thing to think about.”

There have been several spills in Jasper National Park, including one of the biggest in the history of the pipeline when in 1966 almost 7,000 barrels of oil leaked into the park.

Since 1961 there have been 82 spills along the entire length of Kinder Morgan’s Trans Mountain route.

“It used to be a church,” laughs Patti Tyacke as she explains why she and her partner Robin named their bed-and-breakfast the Holy Smoke Inn.

Tyacke caters mostly to snowmobilers who explore the area around Blue River, a small town of about 250 people.

“I love this place. It’s the jewel of the Yellowhead highway,” Tyacke says. “Blue River — it doesn’t get any better.” 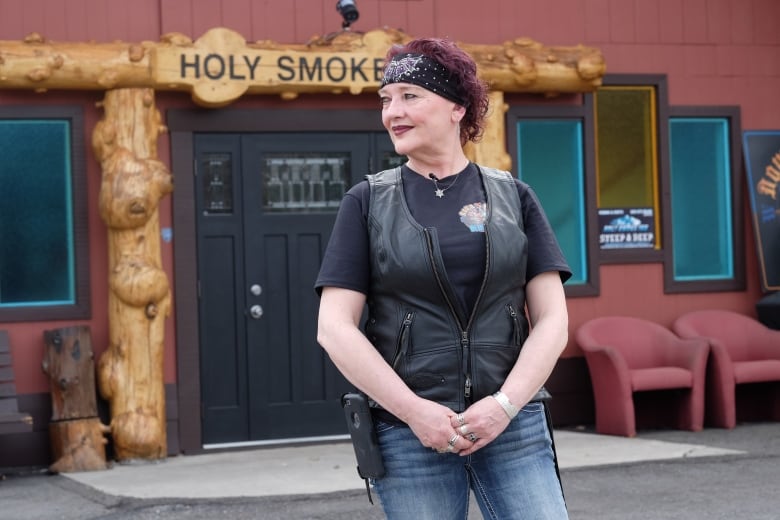 Patti Tyacke has lived along the pipeline route in the town of Blue River for 24 years. She and her husband run the Holy Smoke Inn bed and breakfast in what used to be a church. (Nick Purdon/CBC )

Still, Tyacke — who has lived in Blue River for 24 years — explains how her town has fallen on hard times since the local logging industry dried up.

We don’t want to see Blue River fail. Tourism is all that’s left, so we need every job we can get in this community. And we’ll fight for it.– Patti Tyacke

She’s not worried about the environmental risks of expanding the Trans Mountain pipeline. She’s worried about Blue River’s future.

“This whole valley needs it, we really need it bad,” she says of Trans Mountain. “The jobs, and just the people, we need the pipeline to go through in order to survive.”

Patricia Tyacke supports the Trans Mountain pipeline, because she fears transporting oil by rail could turn her town into ‘the next Lac Megantic’ 0:50

“That’s the rooster. His name is Lucky,” says Penny Powers, who has her joke ready whenever anyone visits her small farm just north of Kamloops.

“He’s lucky because we had a bunch of males and he was the best one, and the rest went to freezer camp.” 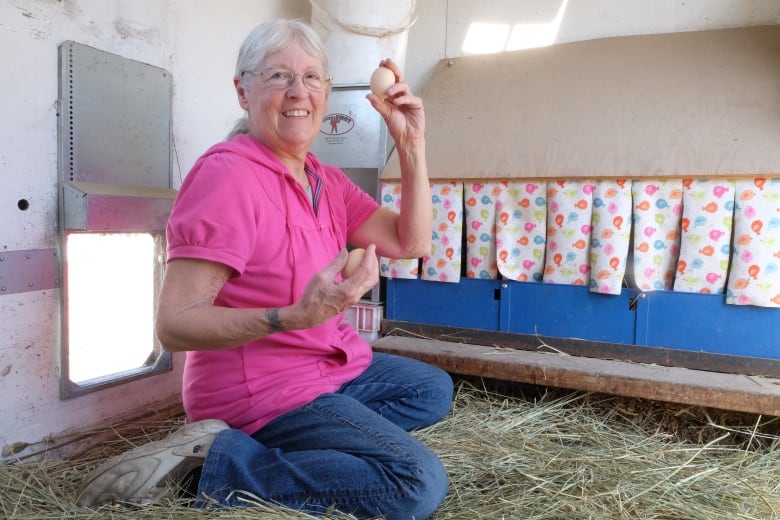 Penny Powers, 70, shows off a pair of eggs at her seven-acre farm in Black Pines, B.C. Powers thinks oil has been a big mistake for humankind and will lead to our extinction. (Nick Purdon/CBC )

Powers, a retired nursing professor, and her partner Charles Hays live close to the land on a farm where they get much of their power from one of the largest sun-tracking solar panels in the province.

If the pipeline expansion gets built, they say it would mean the end of their farm as they know it.

“I don’t really like the idea of someone coming in and vandalizing my property and leaving it for me to clean up,” says Hays. 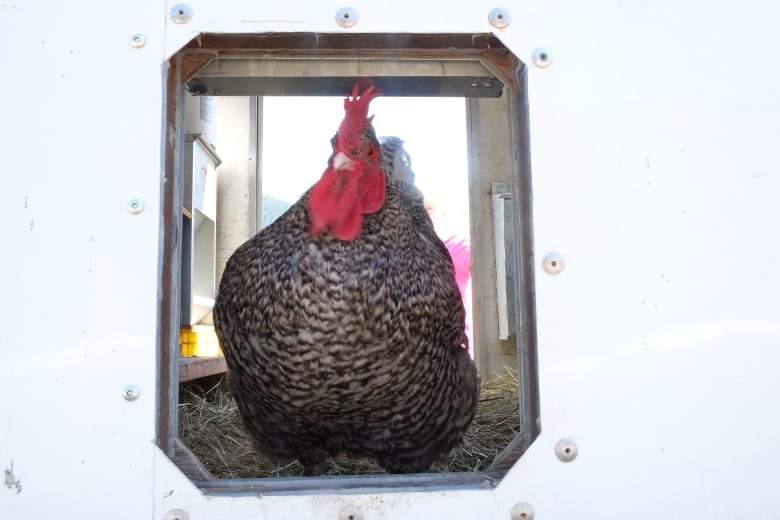 Lucky is the rooster on Penny Powers and Charles Hays farm near Kamloops, B.C. (Nick Purdon/CBC )

He has followed the debate about the pipeline expansion, but finds it lacking. Hays says he wishes the Trans Mountain project, which crosses the property of 2,200 landowners in Alberta and B.C., was more of a referendum on oil.

The problem is that oil is a  19th  century technology. We are not having a discussion about what’s next, what can we do instead.– Charles Hays

“We are not having a discussion about what’s next, what can we do instead … it’s just, ‘we have to pump oil because we have been doing it now for 100 years and we don’t know anything else.'”

Charles Hayes opposes the Trans Mountain pipeline, because he fears it will destroy his orchard 0:24

Covered in sawdust, Pete Ryan, the legendary chainsaw carver from Hope, B.C., works on an owl.

“Got to have an owl ready, because there are a lot of smart guys out there,” he says. “You have to have smart answers.” 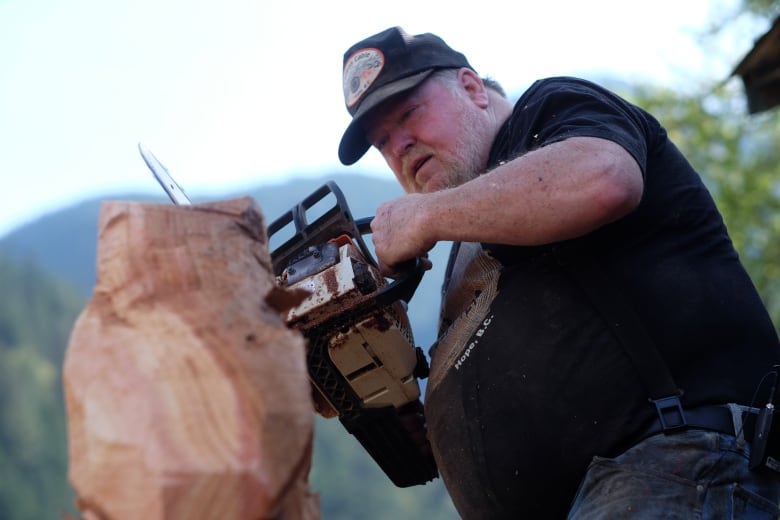 For Ryan, the smart answer when it comes to the Trans Mountain pipeline expansion is to quit debating the project and get building.

“It has to get built. It’s not a matter of ain’t getting built,” he says. “If it doesn’t get built, we are all in trouble. It’s good for the economy and it should be done.”

If it doesn’t get built we are all in trouble.– Pete Ryan

The existing pipeline runs just behind Ryan’s property where he has been carving with his chainsaws for 40 years.

“It’s not sawdust … it’s man-glitter,” Peter Ryan says as he uses a mini-vacuum to blow his t-shirt clean.

Pete Ryan says he hopes the Trans Mountain pipeline gets built, because it could be a boost for the economy. 0:22

Crey is Chief of Cheam First Nation, about 100 kilometres east of Vancouver on the shores of the Fraser River. 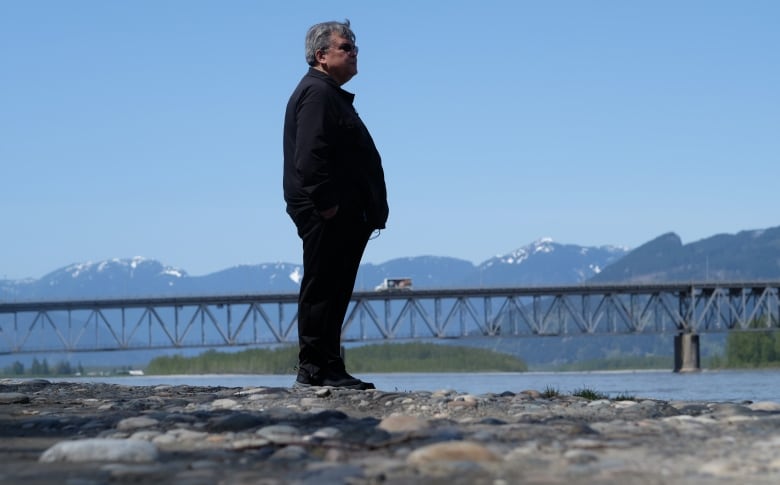 Chief Ernie Crey stands on the banks of the Fraser river in Cheam First Nation, about 100 kilometres east of Vancouver. Cheam is one of 43 first nations to have signed agreements with Kinder Morgan. (Nick Purdon/CBC )

“The popular image of Indigenous people is that we are not interested in participating in the economic development of the larger community,” he says. “Wrong! We want this pipeline to go through so we can improve our economic standing in Canada.”

Crey says he won’t allow environmentalists who oppose the project to stand in his way.

The popular image of Indigenous people is that we are not interested in participating in the economic development of the larger community. Wrong!– Ernie Crey

“I don’t know where they get off thinking that my community can continue to live in poverty in this country by opposing developments that we see as important,” he says.

Crey believes in the Trans Mountain pipeline project so firmly that he says his community would consider investing in it to make sure it gets built.

Ernie Crey, Chief of Cheam First Nation in Cheam, B.C., supports the Trans Mountain pipeline because he sees it as a ‘springboard to other enterprises this community has in mind.’ 0:52

On March 20, Atiya Jaffar sat down with her back against the gate to Kinder Morgan’s Burnaby Terminal and broke the law.

“I felt nervous, of course,” says the 26-year-old from Vancouver. “I hadn’t done anything like this before.” 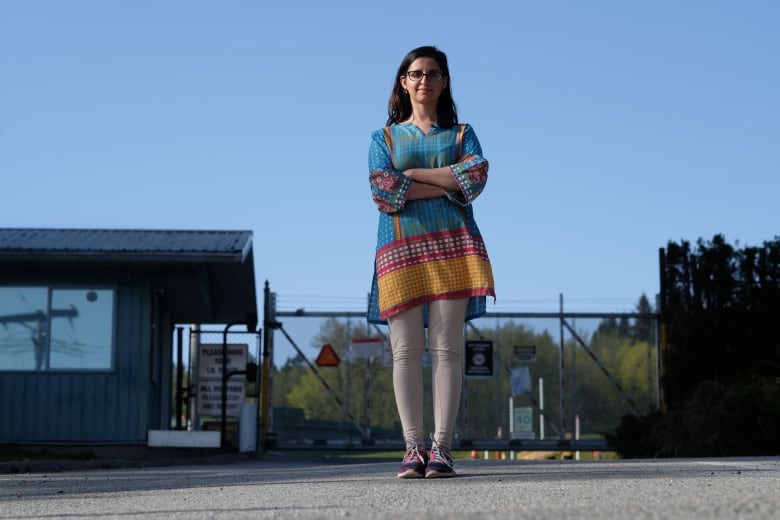 Atiya Jaffar grew up along the route of the Kinder Morgan pipeline in Surrey, B.C. She now works as a campaigner for 350.org – an organization striving to build a global movement to fight climate change. (Nick Purdon/CBC)

Jaffar and five others were arrested for defying a B.C. Supreme Court injunction which states that demonstrators must stay at least five metres back from all Kinder Morgan facilities.

I want to be able to look my children in the eye years from now and tell them that I did what I could to protect their future.– Atiya Jaffar

“I want to be able to look my children in the eye years from now and tell them that I did what I could to protect their future,” Jaffar says.

“It’s so important in moments like this to stand on the right side of history when politicians like Justin Trudeau are not doing so.”

Atiya Jaffar, an activist and immigrant from Pakistan, says building Trans Mountain ‘means unleashing catastrophic climate change and that’s a risk that I am not willing to take.’ 0:26

In the final pipeline right-of-way, a dozen or so metres from Kinder Morgan’s Burnaby operation, Ronnie Dean Harris clears his throat and starts to rap.

“You’re all making deals with the devil without checking the levels …”  the Stō:lo/St’át’imc/Nlaka’pamux artist rhymes. 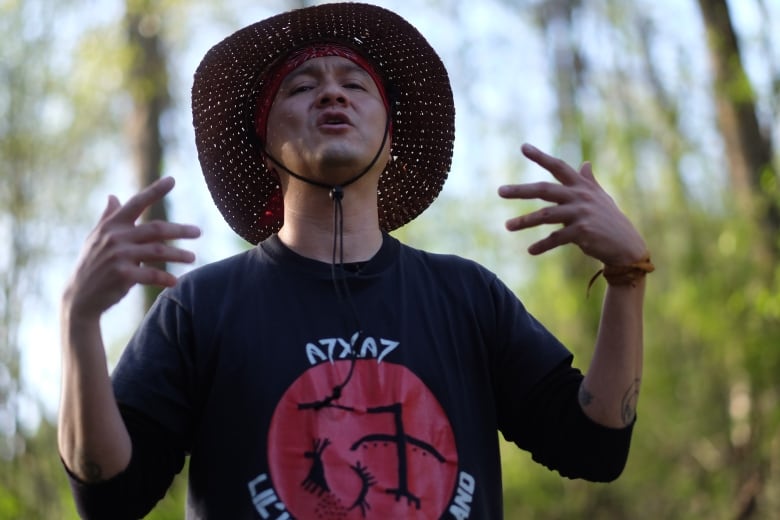 Ronnie Dean Harris is a Stō:lo/St’át’imc/Nlaka’pamux artist living in Vancouver. Harris is a frequent visitor to the permanent protest camp set up on Burnaby mountain at the gates to Kinder Morgan’s operation. ‘I can’t live with this injustice going on,’ Harris says. (Nick Purdon/CBC )

Harris is a fixture in and around the permanent protest camp set up outside Kinder Morgan’s Burnaby Mountain operation.

Change takes bold action and colonization was a bold action, and so we are standing up.– Ronnie Dean Harris

Even so, he admits he’s nervous about standing up against the pipeline.

“We are living in a country where we know the justice system doesn’t serve us well.”