For Clarrie Mendy-Solomon, the Grenfell Tower fire inquiry is an opportunuty to show the world the human faces behind the tragic statistics.

The inquiry is beginning with two weeks of tributes to the people who died when a fire that began in a faulty fridge raced through the 24-storey apartment block in June 2017, killing 72 people.

Mendy-Solomon will testify Tuesday about the loss of her two cousins — Mary Mendy, 54, and her daughter Khadija Mendy, 24.

“Today was the first time people really had time to grieve and express the love that they had for their loves ones, and describe their loved ones and their personalities, instead of people just relating to them as a number and name,” Mendy-Solomon told As It Happens host Carol Off.

“It’s about having a tribute to their lives … and letting the people of the world know these people are human.”

A passionate artist and her encouraging mom

Mary and Khadija Mendy were on the 20th floor of Grenfell Tower when they fell victim to Britain’s deadliest blaze in decades.

They would have been trapped with no way out.

Khadija, she said, was a talented young artist at the “pinnacle” of her career.

Before the fire, Khadija was riding the high from a successful photography exhibit at last year’s Venice Biennale.

“She was inundated with people that wanted to put her in working galleries,” Mendy-Solomon said.

“All her hard work had paid off and was coming into fruition, and that was her end.”

Khadija’s father, Mohammadou Saye, spoke Monday about his daughter’s “burning passion” for photography, which he said was encouraged by her mother.

Khadija’s home in Grenfell Tower doubled as her studio, and her life’s work went down in flames.

‘We are leaving this world now’

Among those who testified on Monday were Marcio Gomes, who got out safe with his wife and daughters, but lost his unborn son in hospital shortly thereafter.

“He might not be here physically, but he will always be here in our hearts, and will be forever,” said Gomes, his voice breaking.

“I know he’s here, with God, right next to me, giving me strength and courage to take this forward.”

Marcio and Andreia Gomes, parents of stillborn baby Logan Gomes, are comforted as they arrive for a commemoration hearing at the opening of the inquiry. (Henry Nicholls/Reuters)

The inquiry heard a message left by Mohamed Amied Neda from inside his apartment.

“Goodbye, we are leaving this world now, goodbye,” said the 57-year-old, who came to Britain from Afghanistan and ran a chauffeur company.

He was found dead after falling from the building. His wife and son were left comatose but survived.

​’Crematorium in the sky’

Mendy-Solomon said connecting with other people affected by the fire has helped her come to terms with her own grief.

She started a WhatsApp group for people to come together, share their stories and offer their support.

“I’ve become so inundated with different strands of affected people — from the bereaved, from the survivors, from the people who’ve been evacuated, from the media and local residents who still have to face daily the crematorium in the sky, which we refer to as Grenfell Tower.” 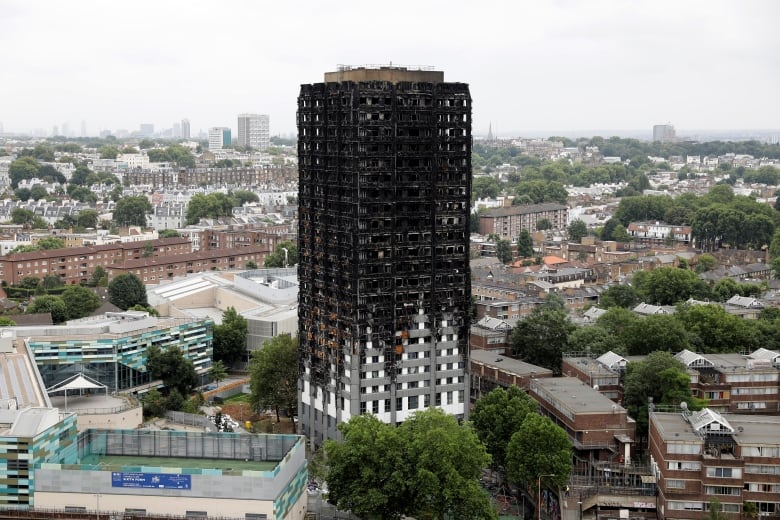 After the first two weeks, retired judge Martin Moore-Bick’s inquiry will look at causes of the blaze, the response of local authorities and the country’s highrise building regulations.

Many residents accuse officials in Kensington and Chelsea, one of London’s richest boroughs, of ignoring their safety concerns because the publicly owned tower was home to a largely immigrant and working-class population.

Police say they are considering individual or corporate manslaughter charges, but no one has been charged.

Written by Sheena Goodyear with files from Reuters. Intervie with Clarrie Mendy-Solomon produced by Chris Harbord.