Day after day, Omir Bekali and other detainees in far western China’s new indoctrination camps had to disavow their Islamic beliefs, criticize themselves and their loved ones and give thanks to the ruling Communist Party.

When Bekali, a Kazakh Muslim, refused, he was forced to stand at a wall for five hours at a time. A week later, he was sent to solitary confinement and deprived of food for 24 hours. After 20 days, he wanted to kill himself.

“The psychological pressure is enormous, when you have to criticize yourself, denounce your thinking — your own ethnic group,” said Bekali, 42, who broke down in tears while describing the camp. “I still think about it every night, until the sun rises.”

Since last spring, Chinese authorities in the heavily Muslim region of Xinjiang have ensnared tens, possibly hundreds of thousands of Muslim Chinese — and even foreign citizens — in mass internment camps. This detention campaign has swept across Xinjiang, a territory half the area of India, leading to what a U.S. commission on China last month said is “the largest mass incarceration of a minority population in the world today.”

The internment program tries to rewire the political thinking of detainees, erase their Islamic beliefs and reshape their very identities. Chinese officials have largely avoided comment, but some have said in state media that ideological changes are needed to fight separatism and Islamic extremism. Radical Muslim Uighurs killed hundreds in China in years past.

Three other former internees and a former instructor in different centres corroborated Bekali’s depiction. Taken together, the recollections offer the most detailed account yet of life inside so-called re-education.

The program is a hallmark of China’s emboldened state security apparatus under the deeply nationalistic, hard-line rule of President Xi Jinping. It is partly rooted in the ancient Chinese belief in transformation through education — taken once before to terrifying extremes during the mass thought reform campaigns of Mao Zedong, the Chinese leader sometimes channeled by Xi.

“Cultural cleansing is Beijing’s attempt to find a final solution to the Xinjiang problem,” said James Millward, a China historian at Georgetown University.

The internment system is shrouded in secrecy, with no publicly available data. The U.S. State Department estimates those being held are “at the very least in the tens of thousands.” A Turkey-based TV station run by Xinjiang exiles said almost 900,000 were detained, citing leaked government documents. Adrian Zenz, a researcher at the European School of Culture and Theology, puts the number between several hundreds of thousands and just over 1 million, and government bids suggest construction is ongoing.

Asked to comment on the camps, China’s foreign ministry said it “had not heard” of the situation. Chinese officials in Xinjiang did not respond to requests for comment. However, China’s top prosecutor, Zhang Jun, urged Xinjiang’s authorities this month to extensively expand what the government calls “transformation through education” in an “all-out effort” to fight extremism. 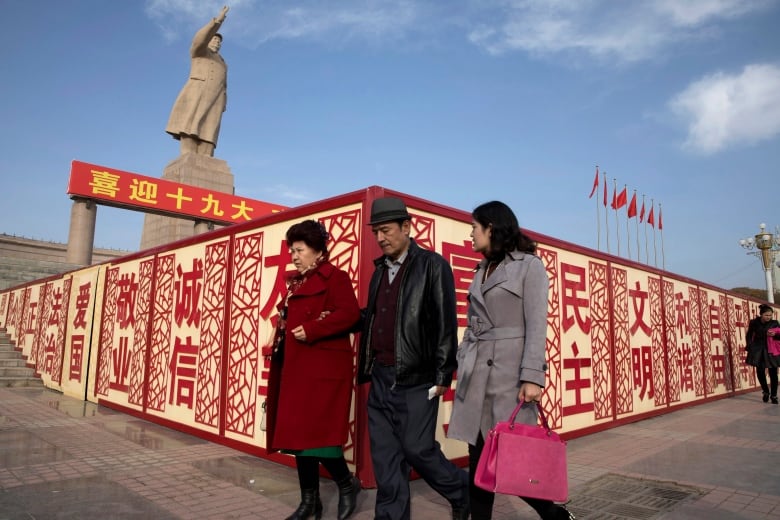 Residents walk past a statue showing Mao Zedong near billboards with the words for “Patriotism” and “Democracy” near a square in Kashgar in western China’s Xinjiang region. Chinese officials say ideological changes are needed to fight Islamic extremism. (Ng Han Guan/Associated Press)

On March 25 last year, Bekali visited his parents in Xinjiang. The next day, police took him away.

‘I haven’t committed any crimes!’

They strapped him into a “tiger chair” that clamped down his wrists and ankles. They hung him by his wrists against a barred wall. They interrogated him about his work inviting Chinese to apply for Kazakh tourist visas. 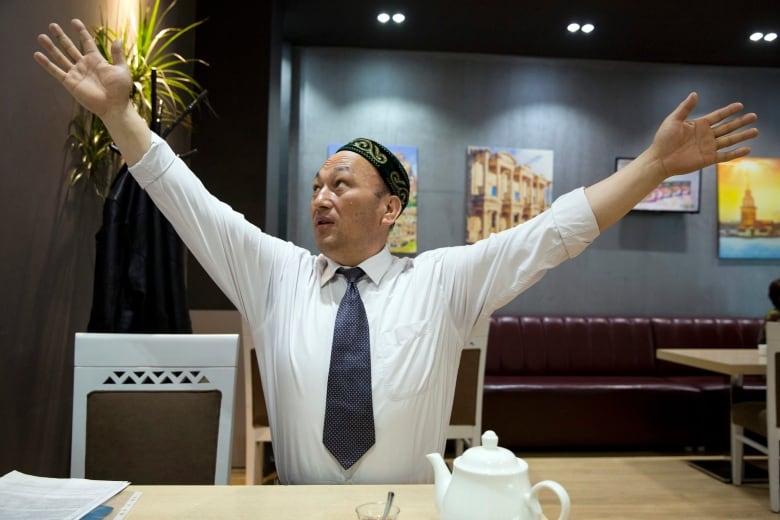 Bekali demonstrates how he was strung up by his arms in Chinese detention. (Ng Han Guan/Associated Press)

Seven months later, Bekali was taken out of his cell and handed a release paper. But he was not free.

Bekali was driven to a fenced compound in Karamay, where three buildings held more than 1,000 internees.

They would wake up together before dawn, sing the Chinese national anthem, and raise the Chinese flag at 7:30 a.m. They sang songs praising the party and studied Chinese language and history. They were told that the indigenous sheep-herding Central Asian people of Xinjiang were backward before they were “liberated” by the Communist Party in the 1950s.

When they ate meals of vegetable soup and buns, they first had to chant: “Thank the Party! Thank the Motherland! Thank President Xi!”

Bekali was kept in a locked room almost around the clock with eight other internees, who shared beds and a wretched toilet. Cameras were installed in toilets and outhouses. Baths were rare, as was washing of hands and feet, equated with Islamic ablution.

In four-hour sessions, instructors lectured about the dangers of Islam and drilled internees with quizzes that they had to answer correctly or be sent to stand near a wall for hours on end.

Self-criticisms of their religious history

“Do you obey Chinese law or Sharia?” instructors asked. “Do you understand why religion is dangerous?”

The detainees had to criticize and be criticized by their peers. One by one, they would also stand up before 60 classmates to present self-criticisms of their religious history. 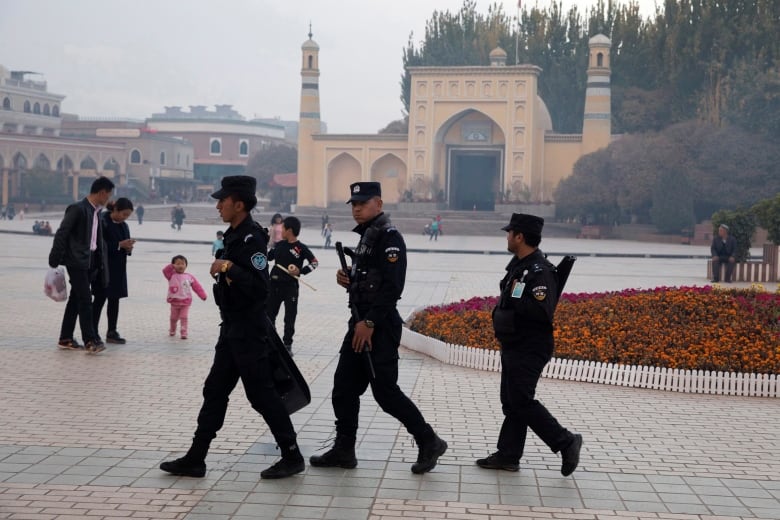 “I was taught the Holy Qur’an by my father and I learned it because I didn’t know better,” Bekali heard one say.

“I travelled outside China without knowing that I could be exposed to extremist thoughts abroad,” another said. “Now I know.”

After a week, Bekali went to his first stint in solitary confinement. He yelled out to a visiting official.

“Take me in the back and kill me, or send me back to prison,” he shouted. “I can’t be here anymore.”

He was again hauled off to solitary confinement. It lasted 24 hours, ending late afternoon on Nov. 24, when Bekali was suddenly released. 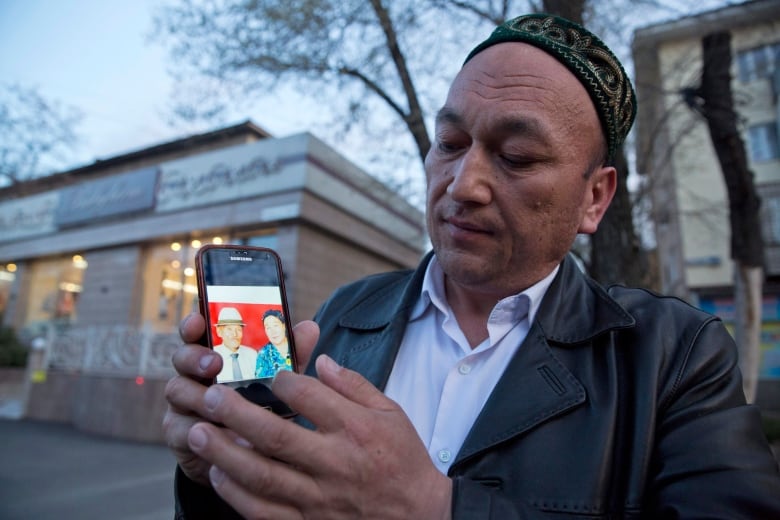 Bekali holds up a mobile phone showing a photo of his parents whom he believes have been detained in China. (Ng Han Guan/Associated Press)

At first, Bekali did not want the AP to publish his account for fear his sister and mother in China would be detained.

But on March 10, the police took his sister, Adila Bekali. A week later, they took his mother, Amina Sadik. And on April 24, his father, Ebrayem.

Bekali changed his mind and said he wanted to tell his story.

“Things have already come this far,” he said. “I have nothing left to lose.”