Hurricane Maria claimed 73 times more lives in Puerto Rico than the official death toll of 64, according to new calculations based on a survey of thousands of residents by a team from Harvard and elsewhere.

The group estimates that 4,645 people died between Sept. 20 and Dec. 31, 2017 as a direct or indirect result of the Category 4 storm, and one-third perished because of delayed or interrupted medical care.

The researchers say even that estimate may be too low, and the numbers “underscore the inattention of the U.S. government to the frail infrastructure of Puerto Rico.”

The findings, reported online Tuesday in the New England Journal of Medicine, are likely to be controversial because the tally is far higher than previous independent estimates, the margin of error is wide, and the emergency response to the disaster has become highly politicized after it sparked criticism of U.S. President Donald Trump, who promoted a much lower death toll and was faulted when much of the territory remained without power for months.

The chief author of the new study, Caroline Buckee of Harvard T.H. Chan School of Public Health in Boston, did not
respond to repeated emails requesting an interview.

The storm and its winds of close to 241 km/hr caused an estimated $90 billion US in damage to an island that had been struggling economically. Many residents subsequently left.

A closer look at the Buckee calculation shows that while the researchers estimate 4,645 deaths, statistically there’s a 95
per cent chance that the actual number could be as low as 793 and as high as 8,498. When the researchers tried to adjust for the fact that people living in single-person households couldn’t report their own death, they estimated 5,740 excess deaths, with a margin of error ranging from 1,506 and 9,889.

The Buckee number is more than four times higher than a December estimate by the New York Times, which reported that the actual death toll was probably about 1,052 excess deaths based on data from the island’s vital statistics bureau and a comparison of deaths during a comparable period in the two previous years. The count included suicides.

At the same time, the Center for Investigative Journalism said it found 985 additional deaths during September and
October. A Pennsylvania State University study put the number at 1,085 (which the Buckee team appears to misreport as 1,218). A CNN survey of funeral directors found 499 additional deaths.

To come up with its dramatically larger estimate, the Buckee team randomly conducted in-person surveys of 3,299 of the estimated 1.1 million Puerto Rican households earlier this year, making sure to include remote areas.

Respondents were not paid and were asked if a household member had died directly or indirectly as a result of the storm. Missing people were not counted as deaths. They were also asked about deaths within a five-minute walking distance. More than 93 per cent of the people approached completed the survey. 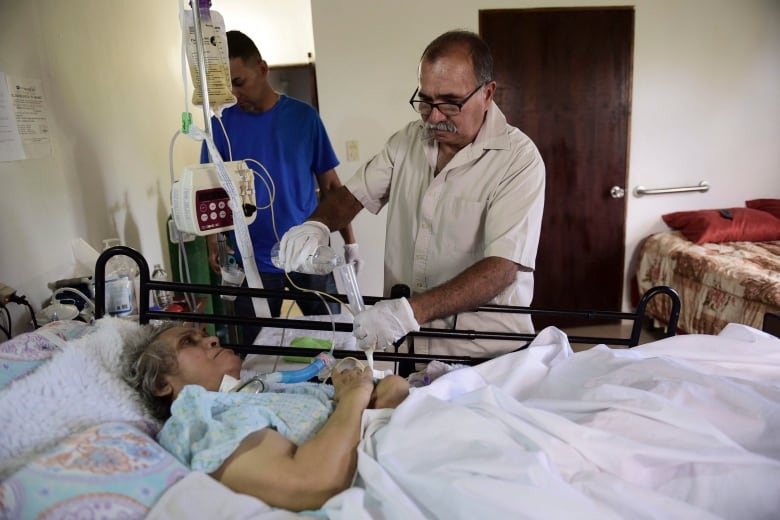 In this May 16 photo, Alberto Rodriguez gives water to his wife Mirella Sepulveda who suffered a stroke in Yabucoa, a town where many continue without power in Puerto Rico. (Carlos Giusti/Associated Press)

“Increases in post-hurricane death rates were observed across age groups and were not a reflection of the migration of younger persons out of Puerto Rico after the disaster,” the team reported.

Just over 14 per cent said they couldn’t get their medicines.

The Times analysis found spikes in deaths from severe infections, diabetes, pneumonia, and breathing disorders such as emphysema.