The body of a 17-year-old Pakistani exchange student killed in a mass shooting at a high school in Texas arrived before dawn Wednesday in the port city of Karachi, where her family lived and where she was being buried.

Sabika Sheikh was among 10 students and staff slain Friday at Santa Fe High School. The alleged shooter is 17-year-old Dimitrios Pagourtzis, who is being held on capital murder charges.

Sabika had planned to return home in a few weeks for Eid al-Fitr, the three-day holiday marking the end of the Muslim holy month of Ramadan.

Aziz Sheikh father of Sabika Aziz Sheikh, a Pakistani exchange student, who was killed with others when a gunman attacked Santa Fe High School in Santa Fe, Texas, U.S., sits in an ambulance next to her coffin, wrapped in national flag, Wednesday in Karachi. (Akhtar Soomro/Reuters)

She was her family’s oldest child and began classes at Santa Fe High School last August. She had hoped to one day join Pakistan’s foreign service.

Her tearful father was there to receive the body at Karachi airport. Abdul Aziz Sheikh has said he hopes her death leads to stricter gun control in the United States.

Later, thousands of mourners, including the provincial governor, attended her funeral at city’s mosque.

“Before her death, she was just my daughter, but now she is the daughter of Pakistan, and it is only because of the love of people, who mourned her killing,” her father said. 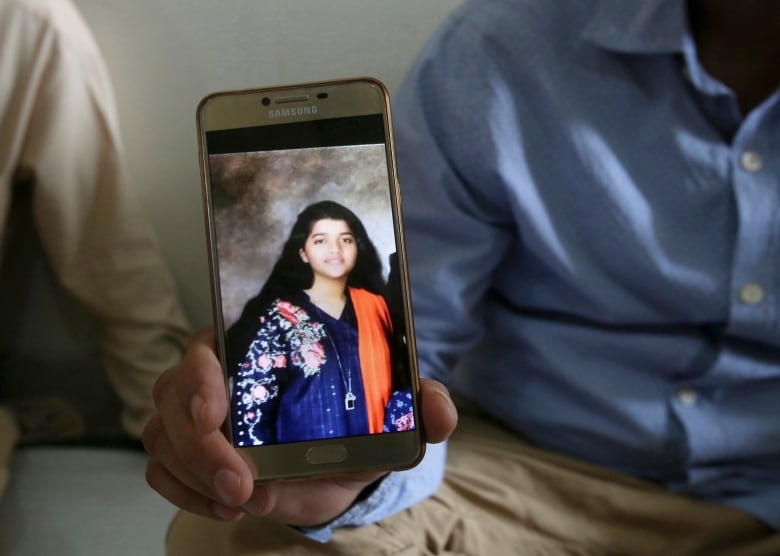 Sabika Sheikh is shown on a family member’s phone on May 19. (Fareed Khan/Associated Press)