The title of Miss Manito Ahbee Youth Ambassador carries a lot more weight than many other similar titles.

Since 2006, the title has also been used by the Manito Ahbee festival — which celebrates Indigenous arts, culture and music — as a way to honour the memory of missing and murdered Indigenous women and girls.

Every four years —  four being a sacred number in Indigenous tradition, marking the completion of a full cycle — a different missing or murdered Indigenous woman is chosen to be honoured by the youth ambassador, according to the Manito Ahbee website.

For the current Miss Manito Ahbee, Chante Speidel, that means honouring Lorna Blacksmith, who was found murdered in 2012 — and it means wearing a ribbon skirt every day.

The young woman from Saptoweyak Cree Nation in Manitoba, who is Cree and Lakota, has committed to wearing the traditional skirt every day during her year as Miss Manito Ahbee. The traditional skirt was given to her as a gift by her mother, and after teaching children the significance of the skirt, she knew wearing it was the best way she could honour MMIWG.

Chante Speidel has worn a ribbon skirt every day during her time as Miss Manito Ahbee to honour missing and murdered Indigenous women and girls. (Submitted by Chante Speidel)

“I told them it stood for women … and how much we need to honour them inside of our families, because they’re our life-givers. That’s what this represents,” said Speidel.

The ribbon skirt traditionally represents women, but those red dresses — and the colour red generally — symbolize missing and murdered women and girls, and that we should never forget them, said Speidel.

The ribbon skirt has helped her share her own story and educate people about MMIWG.

When she’s been asked about the skirt, “I just kind of told my story and how I’m personally affected by MMIWG,” she said.

It was something she didn’t fully understand when she was younger. The future Miss Manito Ahbee didn’t know it at the time, but two of her aunts had gone missing and were later found murdered.

“It really affected my family and I didn’t really understand it because I was super young, and then only later in life till now did I actually realize that they were murdered,” said Speidel.

Becoming Miss Manito Ahbee has opened her eyes more to MMIWG. She always knew about it, but it wasn’t until she found her aunts’ names on a long list of missing and murdered Indigenous women that she realized how widespread the issue is.

“I didn’t even know about it, I just thought they passed on for health reasons or something but no, they were victimized and they were taken from their homes and then missing for a long time, and then they were found murdered, and it affected me for a very long time,” she said.

“I think that’s why I like sharing my story.… It makes me stronger,” said Speidel, who has since looked into her family history to see if she had any more family members who were victimized. 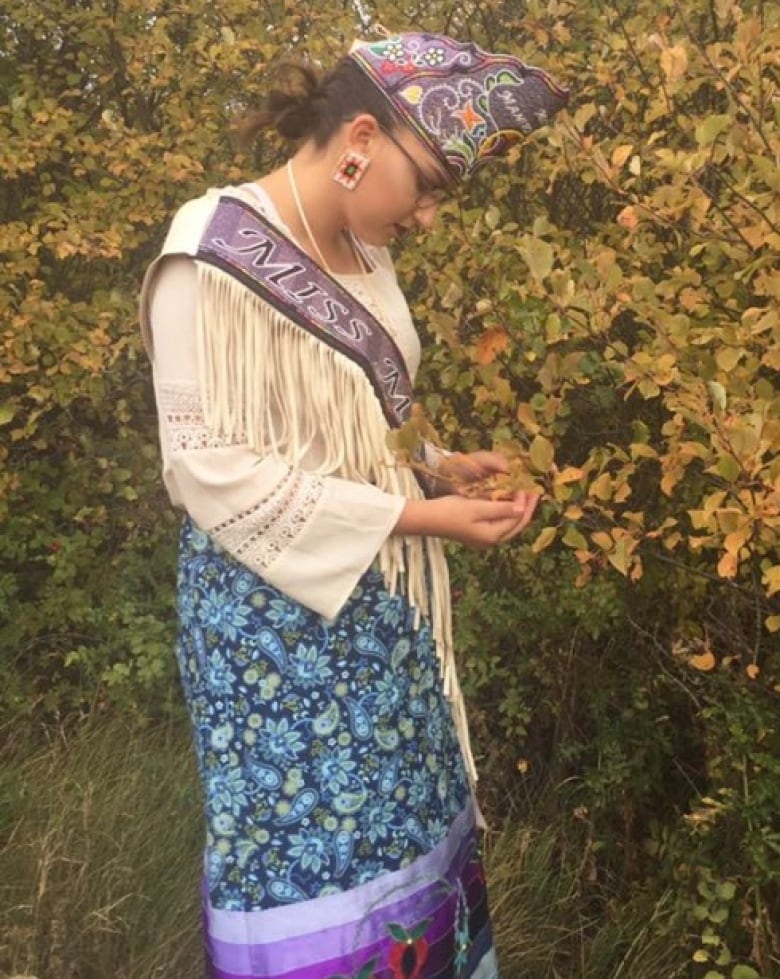 Speidel says it will be sad to end her time as Miss Manito Ahbee, but she’s grateful for ‘all the experiences I was able to have during this year.’ (Submitted by Chante Speidel)

Her two aunts were not the only members of her family who have gone missing, she discovered.

“That has a really big impact on me. [It] just tells me that I’m still victimized [by] this and so is my family and that we need to do something, we need to raise awareness for it and we need to remember them,” said Speidel.

“I feel really sad, but I’m really grateful for the fact that they picked me and gave me the opportunity to be Miss Manito Ahbee, and all the experiences I was able to have during this year,” said Speidel.

Her reign is coming to an end, but she’s still committed to sharing and teaching her culture.

“I walk with a moccasin on one foot and a shoe on the other,” she said.

The Manito Ahbee festival runs in Winnipeg until Sunday.