The bride, now officially the Duchess of Sussex, wore the pure white, long-sleeved gown with a boat neck with a five-metre long veil and a sparkling diamond tiara lent to her by Queen Elizabeth.

The tiara Meghan wore, lent to her by Queen Elizabeth, was made in 1932 for Queen Mary. (Chris Jackson/Associated Press)

Waight Keller, 47, met Meghan earlier this year and the two worked together on the design, which “epitomizes a timeless minimal elegance,” Kensington Palace said.

The gown with a sweeping train was simple in style, which won praise from fashionistas.

Edward Enninful, the editor of British Vogue, called the dress “beautiful” while bridal designer Raishma said the gown was “an example of couture design at its most classic and timeless.”

“It was not a Cinderella choice, not one that spoke of fantasy or old-fashioned fairytales, but one that placed the woman proudly front and centre,” Vanessa Friedman, fashion director and chief fashion critic at the New York Times, wrote.

“It underscored Ms. Markle’s own independence by divesting her of frippery, while also respecting tradition and keeping her covered up.”

Meghan’s long veil, made of silk tulle, was decorated with a trim of hand-embroidered flowers in silk threads and organza, the palace said, and paid tribute to the 53 countries of the Commonwealth.

Harry arrives with Prince William by his side, followed by Prince Charles and Camilla and Prince Philip and Queen Elizabeth 1:03

Later in the day, as the couple departed Windsor Castle for their evening reception, Meghan wore a white gown with a high neck and bare shoulders. 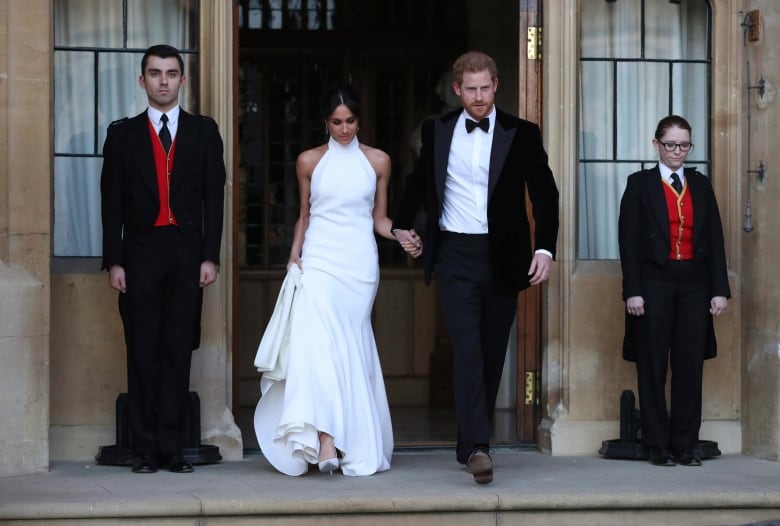 The newly married Duke and Duchess of Sussex leave Windsor Castle after their wedding to attend an evening reception. (Steve Parsons/Associated Press)

The dress was designed by Stella McCartney for the reception, hosted by Harry’s father, Prince Charles. Harry wore a tuxedo.

The couple made the short drive from Windsor Castle to Frogmore House in a classic Jaguar convertible with the top down. The silver blue Jaguar E-Type Concept Zero was originally manufactured in 1968 and now runs on electricity.

Waight Keller also designed the dresses for the bridesmaids who, in keeping with royal tradition, were all children. 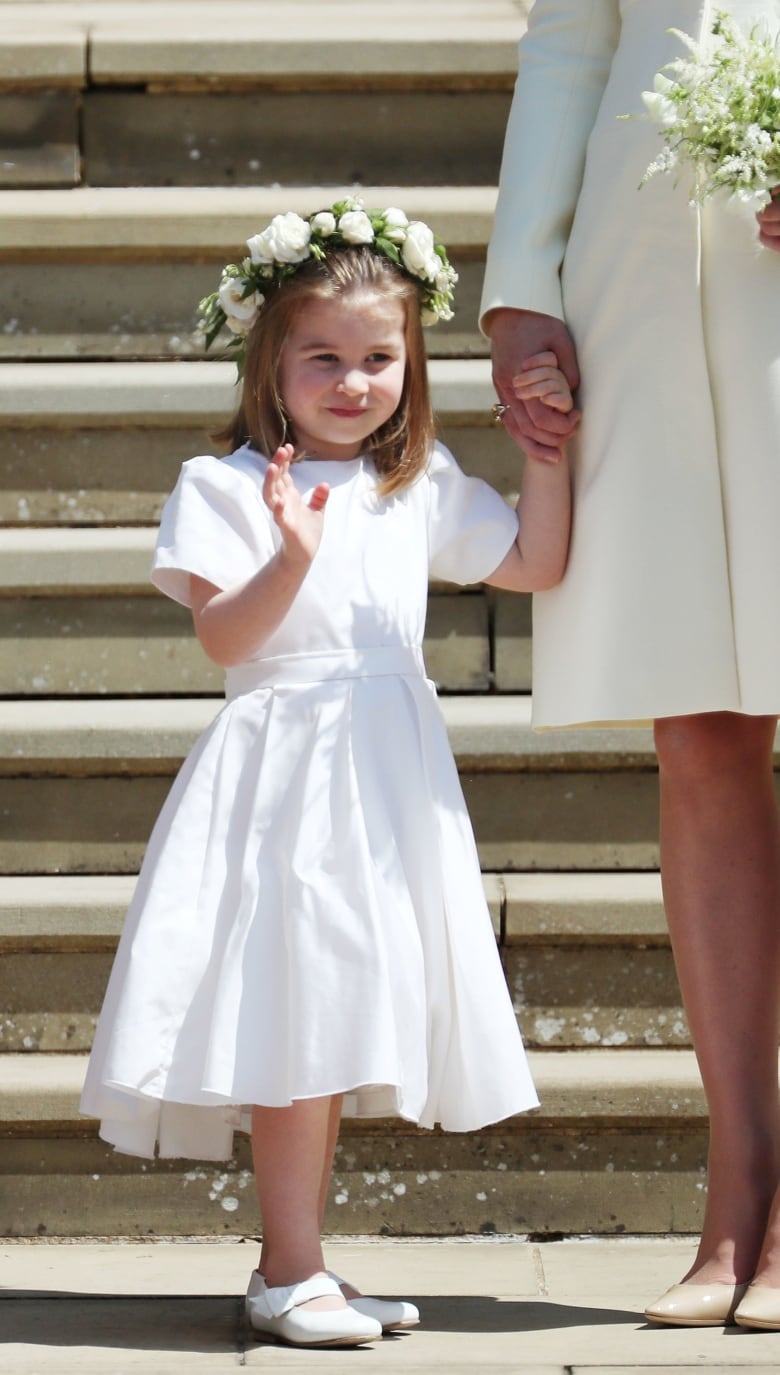 Princess Charlotte, daughter of Prince William and Kate, was one of the bridesmaids at the wedding of her uncle, Prince Harry, to Meghan Markle. ( Jane Barlow/Pool/Reuters)

The dresses were made of ivory silk and high-waisted with short puff sleeves, pockets, pleated skirts and a ribbon that tied in the back with a bow.

Both Prince Harry and his brother and best man, Prince William, wore the frockcoat uniform of the Blues and Royals regiment of the British Army. 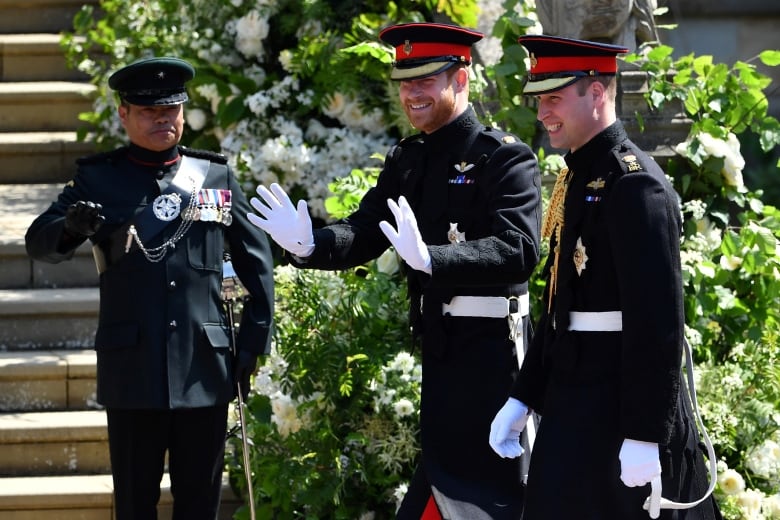 Prince Harry and his brother Prince William both wore the frockcoat uniform of the Blues and Royals regiment of the British Army. (Ben Stansall/Reuters)

The Queen gave her permission for her grandson to get married in his military uniform, which was cut and made by hand, according to Kensington Palace. The frockcoat was ranked to Major with large gold embroidered crowns.

Harry wore a pilots’ wings badge which he earned while flying helicopters in the army. 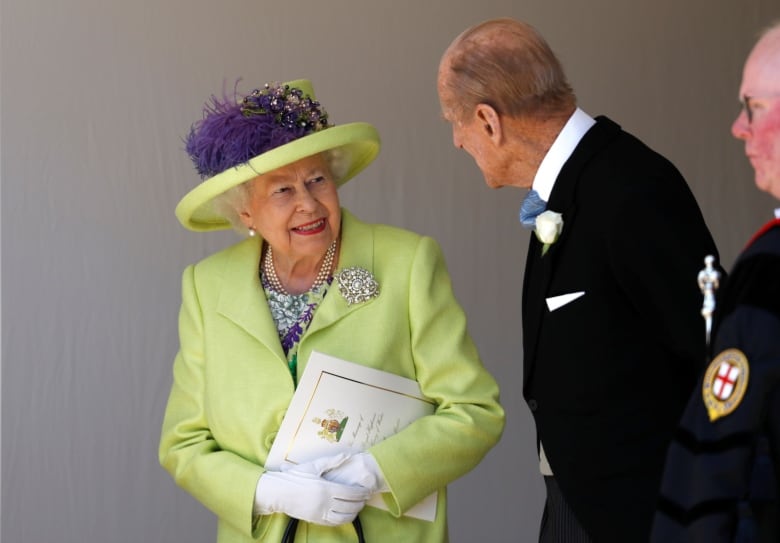 Queen Elizabeth talks with Prince Philip after the wedding ceremony of their grandson, Prince Harry on Saturday. (Alastair Grant/Pool/Reuters)

Queen Elizabeth, the grandmother of the groom, wore a flared dress in lime, lemon, purple and grey printed silk, along with an Angela Kelly hat made with the same lime silk tweed and decorated with handmade lace crystals and pearls.

The mother of the bride 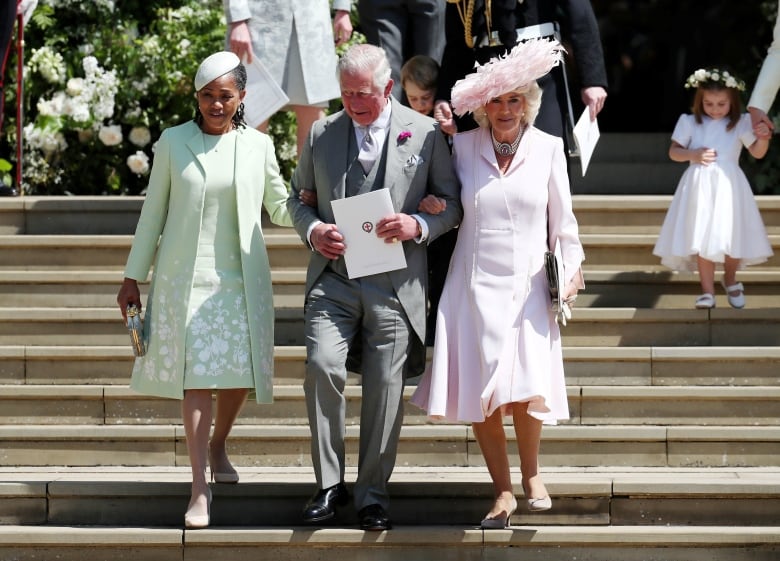 Doria Ragland, mother of the bride, walks down the steps of St. George’s Chapel after the wedding, accompanied by Prince Charles and the Duchess of Cornwall. ( Jane Barlow/Pool/Reuters)

Meghan’s mother, Doria Ragland, wore a pale green dress and day coat with a white pattern along the bottom designed by the creative directors of Oscar de la Renta. She also wore a matching custom-designed hat.

The many celebrity guests in attendance offered up an array of royal wedding outfit styles and colours. Hats and fascinators came in all shapes and sizes, decorated with flowers, feathers and often netting.

In a nod to British designers, human rights lawyer Amal Clooney and Oprah Winfrey wore outfits by Stella McCartney. Clooney picked a yellow midi-dress with a tie detail on the side which she paired with a hat in the same colour. Winfrey wore a blush pink tiered dress with a lace trim, along with a large flowery hat and sunglasses.