Thanks to the efforts of Ottawa-area artist Colleen Gray, a 16-year-old from a First Nation in Saskatchewan will be showcasing and selling her artwork at a gallery in Ottawa from June through December.

But promoting the work of Indigenous artists isn’t all Gray does — she’s also the founder of Art For Aid, an initiative that ships art supplies to remote Indigenous schools.

For a large part of Gray’s life, her mother kept their Mi’kmaq heritage secret from her and her siblings, she said. But some 20 years ago, during a hunting trip, her uncle produced a status card and the jig was up.

“Back around the time that my mom was growing up, being Native on any level was not something that you put out there in front of everybody,” Gray said. “There’s a lot of stigma attached to it, a lot racism, a lot of residential school damage was done to a lot of people who once freely practiced their culture.”

A local organization that collects and ships art supplies to remote Indigenous schools will soon facilitate a young Indigenous artist’s exhibition at a gallery in Cumberland, Ont. 1:13

Gray worked to bring art by 16-year-old Jewel Charles, a Grade 10 student from the Lac La Ronge Indian Band in north-central Saskatchewan, to display and sell at the Da Artisti Studio & Gallery in Cumberland, a community in east Ottawa.

Gray founded Art For Aid because she recognizes art can be a tremendously powerful medium for healing.

“Art For Aid was developed back around 2012, back when the Attawapiskat housing crisis was at its peak. I saw, in all of the media, the kids in the background weren’t doing a whole lot, so I started investigating remote communities and the challenges that they faced. I recognized in that research that art supplies are few and far between in a lot of the schools and community-run-programs,” she said.

Gray reaches out to people in the art community and others around Ottawa to ask for new or gently used art supplies, which she then ships to remote Indigenous schools.

“The budget for shipping chews up a lot of money, but I sell my art to pay for the shipping,” Gray said of her business model. “It’s a constant ebb and flow. When the money is in the budget for shipping, I ship supplies. When it’s not there, I have to sell more art. So it’s a balancing act.”

Map to My School project

More recently, Gray started a project with Art For Aid called The Map to My School, which began to develop when she discovered a map created by the American-Canadian Center at the University of Maine.

“For, I think about 10 years, a group of people from the centre in Maine travelled across Canada, speaking with Indigenous elders, community wisdom keepers and knowledge keepers, determining what the names of their communities are and what these names mean in the English language,” Gray said.

“All of that information was taken and compiled on a Canadian map.” 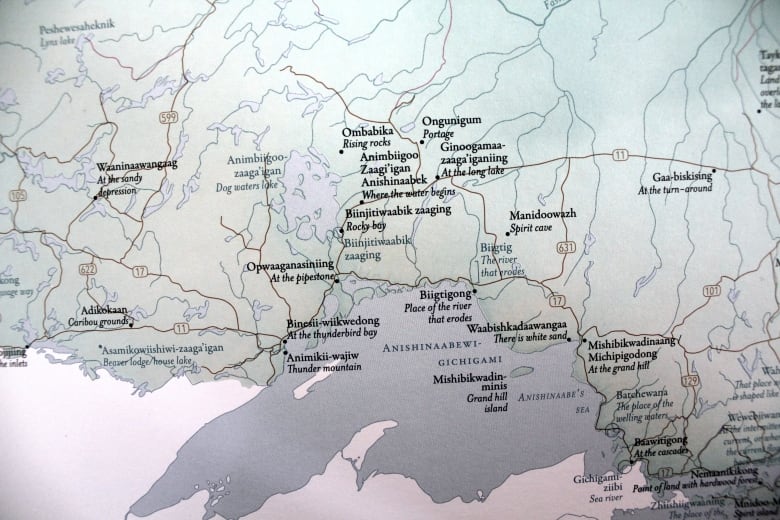 Gray started a project called The Map to My School, which traces Indigenous communities near the Maine-Quebec border. (Submitted by Colleen Gray)

Gray said her efforts are in response to the many challenges that rural communities face: “The challenges of remote communities, when it comes to youth, go far beyond what we can recognize here in our world where we can go to the corner store and pick up our groceries or jump in the car and go into town for a movie,” she said.

The Métis artist hopes to keep assisting young Indigenous artists however she can.

“Art, I think, can really help release some of that angst, some of that boredom, break the isolation and give them something to do,” she said. “And the talent in these kids is amazing. I mean, you don’t know what you can do until you have the supplies to do it with.

“And so that’s my mandate: to get those supplies to the kids and allow them to explore the artistic side to themselves.”