Laurie Thomas is feeling the strength, power and love from mothers all over the world today.

The mother of Evan Thomas, one of 16 people killed in the Humboldt Broncos’ team bus crash, was struggling in the lead-up to Mother’s Day.

“Us moms, with the Broncos, today seems extra hard just because it’s fresh. It’s five weeks and two days, and we keep expecting them to walk through the door and hug us and say, ‘Hey Mom.'” she said. “For a few of us, that’s not going to happen this year.”

No matter how busy they were rushing to hockey and ball practice, Evan — one of the 16 people killed in the Broncos’ team bus crash — would always take a minute to hug his mom and wish her a happy Mother’s Day.

But knowing Evan wasn’t around to give his mother a hug, other mothers wanted to step in and fill the gap.

So Team Hockey Moms, a group with members from Canada, U.S., and other parts of the world, delivered 55 bouquets to those impacted by the crash, and virtual hugs with a social media campaign that saw several women sending messages of love and support to their fellow mothers.

“When the flowers arrived, it brightened my day,” said Thomas through tears, of the unexpected flower delivery she received on Saturday. “I really appreciated the fact that all the hockey moms out there were thinking of us hockey Bronco moms. It was beautiful.”

Laurie Thomas tweeted a picture of her bouquet next to her son’s hockey bag, letting the organizers know how touched she was by the special delivery. (Submitted by Laurie Thomas)

Good wishes on a difficult day

Andrea Reilly is an American hockey mom living in Montreal. She said the flower campaign began when Shelley Woll, a fellow American hockey mother, had the idea to reach out to all the women impacted by the Humboldt Broncos’ crash.

“She had the idea to do this social media blitz just to send good wishes to these women, on this weekend, which we know is going to be a very difficult day.”

Just in the past few weeks, the group of hockey moms started putting on social events and charity fundraisers, collecting $10,000 toward giving flowers to each of the biological and billet moms, and other members of the Broncos’ family. The hockey moms were overwhelmed with donations, to the point that they had to stop collecting and will donate the extra proceeds to the Broncos, Reilly said.

They also encouraged moms to take photos of banners, with the hashtag #HockeyMoms4Humboldt, and those pictures came pouring in from around the world.

“We can’t give them a hug, this is the closest we can do,” said Reilly.

When Reilly saw the recipient mothers sharing stories on Twitter and Instagram of receiving flowers, and putting them next to hockey bags and helmets, she said the fellow hockey moms knew they’d done what they set out to do.

“There’s not a dry eye among us. You see that, it makes it so real.”

Kevin Garinger, president of the Broncos and himself part of a billet family, helped pull the surprise together, getting addresses and names for the flower deliveries over the past two weeks.

“It absolutely speaks to the fact that people want to reach out and help,” he said, calling it “amazing” to see the outpouring of support from moms from around the world.

“This is just another ray of light and a ray of hope for everybody.”

‘In my heart always’

Thomas described the connection between all the moms, and the billet moms as well, as just another way of drawing strength. On Mother’s Day, she had an extra special hug with her daughter, and a brunch with her son’s billet mother, as well as receiving several texts and messages of support from friends and loved ones, who are “all going through this together,” she said.

People always say how no parent ever expects to lose their child.

“That’s why for me, I am heartbroken. A piece of me will always be gone, because he was my boy. He was my boy.”

But Thomas knew her son would be tapping her shoulder, and encouraging her to be strong, and telling her, ‘I’m with you.’ 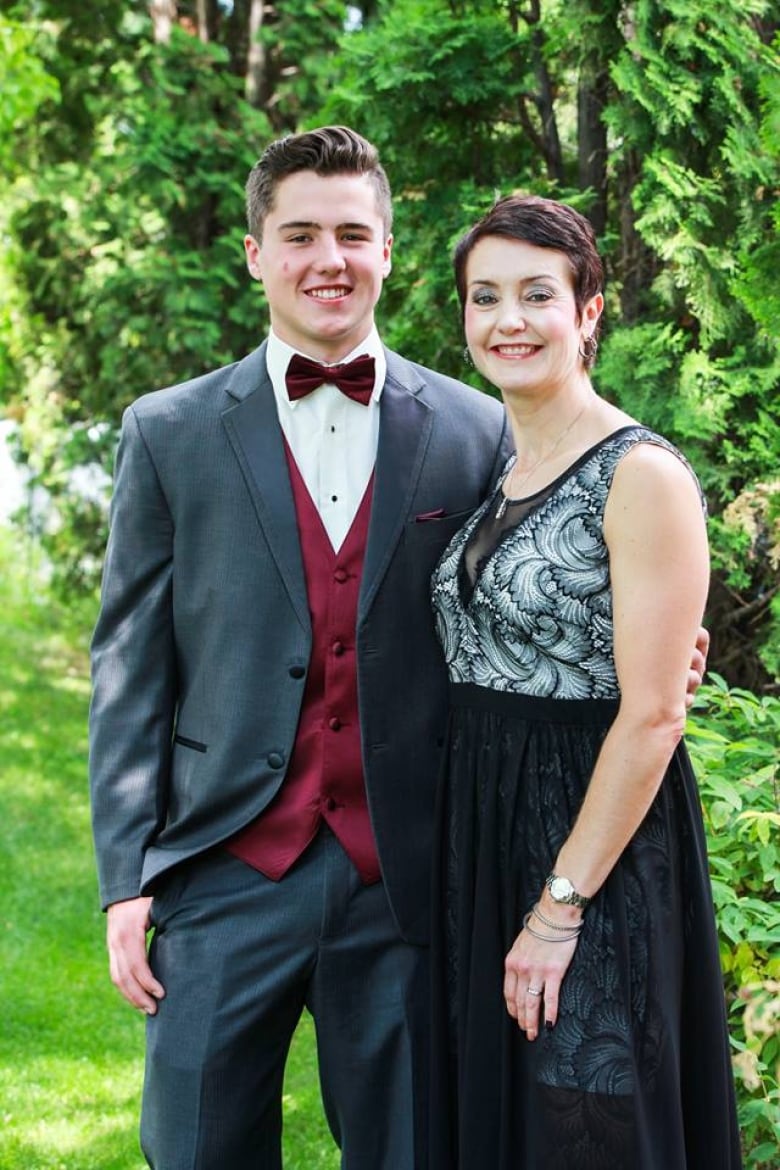 Despite the family’s busy schedules, Evan Thomas was always ready to give his mother, Laurie, a hug on Mother’s Day. While Laurie Thomas’s daughter stepped in to give her mother an extra special hug, so did strangers from all over the world. (Submitted by Laurie Thomas)