A Russian journalist who was reportedly gunned down in Ukraine’s capital strolled into a news conference that authorities called Wednesday to discuss the investigation into his death, revealing that the slaying had been staged to foil an alleged Kremlin hit plot.

“I’m still alive,” Arkady Babchenko, 41, told startled fellow reporters at the news conference held less than 24 hours after police reported he had been shot and killed at his Kyiv apartment building.

Ukrainian police said Tuesday that Babchenko, a strong critic of the Kremlin, was shot multiple times in the back Tuesday and found bleeding there by his wife. Authorities said they suspected he was killed because of his work.

Babchenko apologized to his wife, who he said was not briefed on the scheme in advance, “for the hell she had to go through in the past two days. There was no choice there, either.”

Neither he nor Vasyl Hrytsak, head of the Ukrainian Security Service, provided details of how they staged Babchenko’s injuries or made his wife believe he was dead.

I know that sickening feeling when you bury a colleague. I’m sorry you had to go through this but there was no other way.–  Arkady Babchenko

The movie-like twist came as Hrytsak convened the news conference to announce that the security agency and the police had solved Babchenko’s reported slaying. He then confused everyone there by inviting the supposed slaying victim into the room.

To applause and gasps, Babchenko took the floor and apologized to the friends and family who mourned for him and were unaware of the plan.

“I know that sickening feeling when you bury a colleague,” he said. “I’m sorry you had to go through this but there was no other way.”

Before ushering Babchenko into the room, Hrytsak said investigators had identified a Ukrainian citizen who had been recruited and paid $40,000 US by the Russian security service to organize and carry out the killing. The unidentified Ukrainian man in turn hired an acquaintance who had fought in the separatist war in Eastern Ukraine as the gunman.

The man allegedly paid to organize Banchenko’s killing was detained Wednesday, he said, showing a video of the arrest.

Hrytsak said killing Babchenko was part of a larger alleged plot by Russian security services. The Ukrainian man was also supposed to procure large quantities of weapons and explosives, including 300 AK-47 rifles and “hundreds of kilos of explosives,” to perpetrate acts of terror in Ukraine, he said.

The head of Kyiv police Andriy Krishchenko, centre, speaks to journalists at the entrance to Babchenko’s building late on Tuesday. (Sergei Supinsky/AFP/Getty Images)

Babchenko said he was not allowed to go into the details of the sting operation, but said Ukrainian law enforcement had been aware of a contract on his head for two months. He said he was approached by the Ukrainian Security Service, the SBU, a month ago.

“The important thing is my life has been saved and other, bigger terrorist attacks have been thwarted,” he said.

One of Russia’s best-known war reporters, Babchenko fled the country in February 2017 after receiving death threats. He spoke and wrote about leaving the country because of the threats against him and his family. He said his home address was published online and the threats he received were made by phone, email and social media.

“Ukrainian law enforcement agencies are becoming stronger every day in countering Russian aggression,” Poroshenko said on Twitter. “It is unlikely that Moscow will calm down — I’ve given an order to provide Arkady and his family with protection.”

Ilya Ponomarev, a former Russian lawmaker who also moved to Ukraine, said Wednesday that Babchenko continued being threatened after he settled last fall in Kyiv, where he worked as a host for the Crimean Tatar TV station. Babchenko did not take the intimidation too seriously, according to Ponomarev.

Moscow’s annexation of Crimea and support for separatist insurgents in Eastern Ukraine were topics on which the journalist was scathingly critical of the Kremlin.

The Russian Foreign Ministry said on Wednesday it was happy Babchenko had turned out to be alive after all, but said Ukraine has used his story as propaganda.

Vyacheslav Volodin, speaker of the Russian State Duma, told domestic news agencies on Wednesday that Russia would be happy to help with the investigation if Ukrainian authorities requested it. 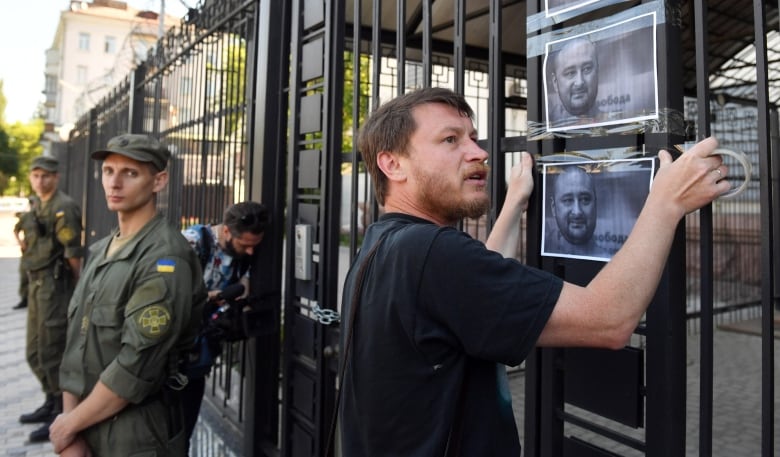 An activists hangs portraits of journalist Arkadi Babchenko on the fence of the Russian embassy in Kyiv on Wednesday after police claimed he had been shot dead. (Sergei Supinsky/AFP/Getty Images)

Babchenko served in the Russian army and fought during the first separatist war in Chechnya during the 1990s. He later became a journalist and worked as a military correspondent for several Russian media outlets. He also published several books based on his wartime experiences.

Some of his articles and posts outraged many Russians. In one, he said he felt no regret about the deaths of Russian army choir members and others from a December 2016 plane crash as they were heading to perform before Russian troops in Syria. Some even called for stripping Babchenko of his Russian citizenship.