One of the only times I’ve likened a culinary outing to a religious experience was at a barbecue joint in Texas — the kind of place where you leave splattered in sauce and smell like charred mesquite for days.

The tea was sweet, the server called me “baby,” and the meat that clung to each hefty beef rib so unctuous and divine that I called out to a higher being between bites, open palms raised to the sky.

I was hoping the food at Michael Maxxis’ third restaurant, Holy Roller, would live up to its name and have me — maybe not rolling on the floor — but at least offering up a ‘Whoop, whoop’ or an ecstatic ‘Hallelujah’ or two.

The décor is certainly praiseworthy, but it’s what we’ve come to expect from this filmmaker and his design team responsible for El Cortez and Have Mercy on the same block in Old Strathcona.

The antechamber of the 200-seat space is reminiscent of a 1930s hotel lobby with wood panelling, brass light fixtures, high-backed chairs and bookcases filled with reading material.

Our food explorer Twyla Campbell returns with a review of Holy Roller on Gateway Boulevard. 6:52

You can order a coffee or light fare here, including soups and sandwiches, but for supper, you must make your way past the art deco ceramic whippets that guard the portal to the dining room.

This point of entry reveals a visual pleasure dome bathed in neon light and the glow of crystal-jewelled chandeliers.

Artistic juxtaposition appears on walls and in nooks (even in the restrooms) where edgy graffiti and exposed brick meet the elegance of vintage wallpaper and intricate tile work. Panthers and pineapples and gorillas: seek, and ye shall find them here.

My journey through the menu starts off with one skewer of Caribbean shrimp, and another featuring coffee- and cocoa-seasoned lamb with mole sauce. These are from the pinxtos section—a type of small-bite food that originated in northern Spain.

I’d like to say it was a glorious gathering of nations, but each culture (Spanish, Caribbean, and Mexican) fought—and died—on their respective spears. For all the descriptions on the menu, flavour in each is non-existent and the textures and temperatures are tough and tepid.

The idea of combining blue crab and shrimp in creamy garlic and sun-dried tomato risotto, does not, to these ears, sound delectable. Trepidation aside, and there but for the grace of CBC go I, I am too curious to pass on the Italian-inspired dish. 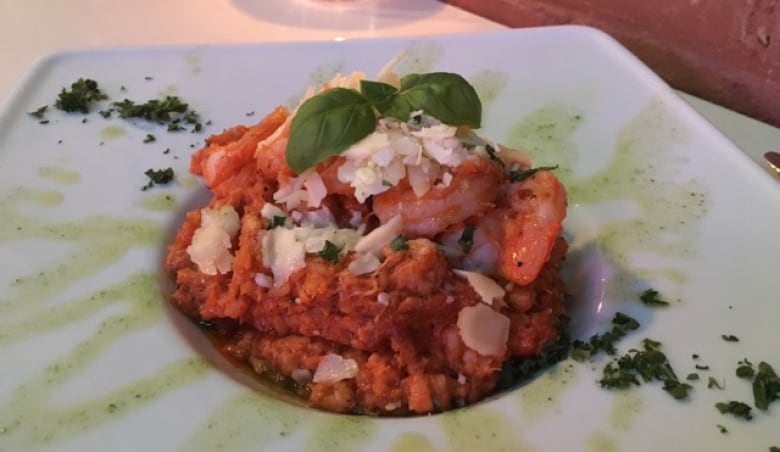 Curiosity not only killed the proverbial cat, it killed this reviewer’s hope for a culinary revelation. Had the rice been properly prepared, it may have worked, but the risotto is so overcooked that the dish is more like crab tomato pudding and, yes, as undesirable and inedible as it sounds. 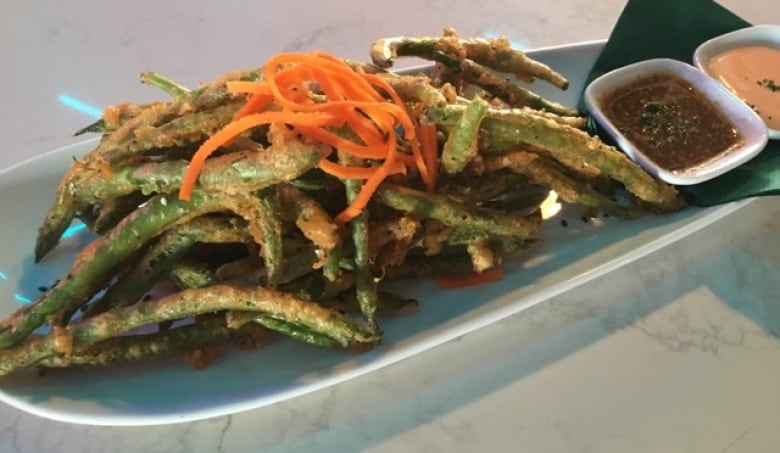 By comparison, the Asian beans are a delightful, simple offering. Fresh green beans are battered in a light tempura, thrown into the fryer and served with two dips: a sriracha aioli and a habanero beer mustard (which is not really a mustard but more a thin vinaigrette).

If any dish could lead me back into temptation, it might be this one, but it would have to come with a first-born man child and 30 Hail Marys to atone for all the other culinary transgressions, including whatever happened to the Al Pastor pork ribs. 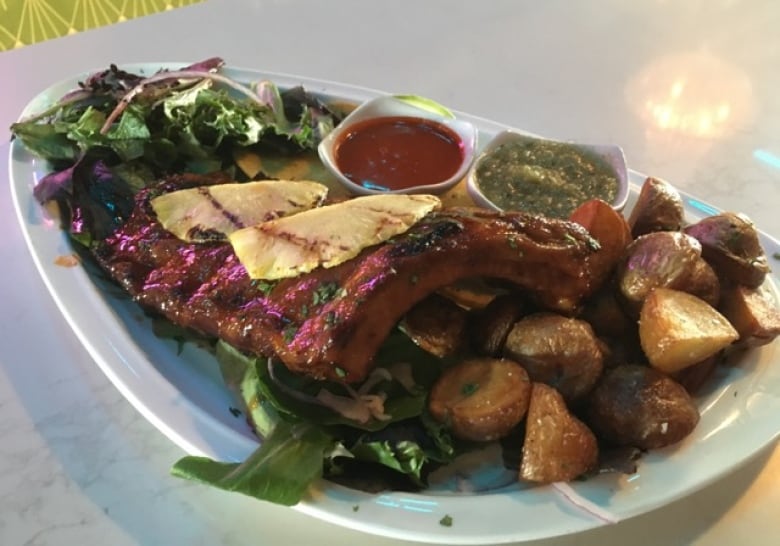 The Mexican-inspired recipe should abound with the flavours of chilies and garlic, but the only thing in abundance is regret on my part for ordering this belligerent rack of meat and bone.

After attempting to saw through a section and losing most of my undressed pile of salad greens and roasted potatoes on the table, I surrender with a wave to the server. 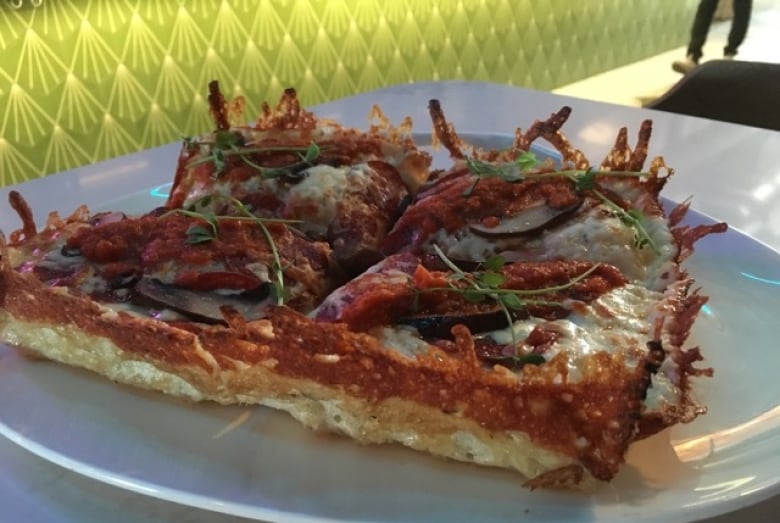 It is the weighty, Detroit-style pepperoni pizza that brings salvation — but only because it is hot and gooey with loads of cheese and I am in need of sustenance after being nearly defeated by everything else.

Thankfully there was master bartender, Mark Chisholm, behind the wood making fantastic cocktails, but alas, he has now left the fold. Unfortunate because aside from the cool setting, his concoctions (and those Asian beans) were Holy Roller’s only saving grace.

You can hear Campbell’s reviews on Edmonton AM every second Friday. You can also see more of her reviews on her blog, Weird Wild and Wonderful, and can follow her on Twitter at @wanderwoman10.