Winnipeg Mayor Brian Bowman is coming under fire after his Twitter account shared a Globe and Mail opinion piece that contains a negative reference to the city’s Indigenous community.

Former Winnipegger Benjamin Shinewald’s article, titled “The Jets are out, but Winnipeg is definitely ‘in,’ ” praised Winnipeg’s new status after the Jets’ playoff run, as well as the success of the city’s “slow and steady” economy.

Winnipeg Mayor Brian Bowman retweeted a Globe and Mail article that offended many in the Indigenous community. (Twitter)

Critics of the piece have taken issue with a paragraph at the beginning of a section about the cultural makeup of the city, and contributions of different ethnic groups to Winnipeg’s “enduring prosperity.”

“There are still many in the city who lag behind, including sizable parts of the city’s large Indigenous community, some of whom live in deplorable conditions. This is a terrible stain on an otherwise impressive recent economic record,” Shinewald wrote.

“But other groups in Winnipeg are currently thriving, and they are at the heart of the city’s success.”

The article goes on to point out the city’s Filipino, Portuguese, South Asian, Jewish, Ukrainian and British-descended communities.

Michael Redhead Champagne, the founder of Aboriginal Youth Opportunities, said while he and others leaders in the Indigenous community appreciate the article’s focus on the positive aspects of Winnipeg, they take issue with the way Indigenous people are portrayed.

“We do take exception to the fact that it seems like the only mention of Indigenous people was in a negative, very deficit-oriented, stereotyping way,” he said. 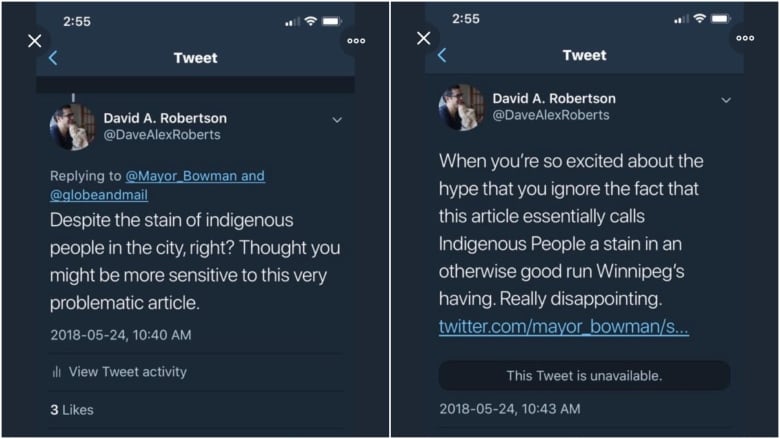 “It’s important in 2018, in what many are calling an era of reconciliation, for especially those in media and leadership positions to be sensitive to how things can be received,” said Champagne.

“It’s important for people to read an entire article prior to retweeting it.”

Bowman’s office responded to the CBC’s request for comment in an email.

“The mayor was ‘sharing’ the complimentary comments about Winnipeg being on the rise. And did so without fully reviewing the article. In no way was the mayor intending to perpetuate the offensive comments contained in the article,” said spokesperson Jeremy Davis.

“Winnipeg is on the rise because of our diversity, not in spite of it.”

Davis said the mayor has reached out to those who were offended and will be communicating with the Globe and Mail on Friday.

Focus on positive contributions, not poverty

“In the case of this particular tweet, I know that it was deleted after the fact after some backlash was heard,” he said.

“But I think if we are cognizant enough to remove a message that we felt needed to be deleted, than we should also be deliberate about replacing that narrative with a positive one.”

Champagne said he would have liked to see Bowman point to a number of Indigenous initiatives, like the Bear Clan, Drag the Red and Got Bannock, that highlight the community’s commitment to volunteerism.

He also said the mayor could have directed some attention to the economic impact of the Manito Ahbee Festival and the Indigenous Music Awards, two Indigenous-led events that took place in the city last weekend.

“There’s a lot of fantastic things that we can focus on when we’re talking about Indigenous communities in Winnipeg, other than the fact that we happen to be a little bit poor,” said Champagne.