Texas Gov. Greg Abbott was set to hold a series of meetings Monday on how to combat school violence, three days after a 17-year-old killed 10 people in the fourth-deadliest mass shooting at a public school in modern U.S. history.

The attack at Santa Fe High School in Santa Fe, Tex., came a little more than three months after a 19-year-old shot dead 17 students and educators at a Florida high school. That incident intensified a long-running national debate about gun rights and sparked a student-led movement under the slogan #NeverAgain.

Abbott, a Republican and staunch supporter of gun rights, said he would talk with educators, parents and elected officials about ways to improve school security without infringing on the right to bear arms, which advocates say is protected by the Second Amendment of the U.S. Constitution.

His spokesperson Stephen Chang said the governor was finalizing plans for the roundtables, including the dates and participants. Mike Collier, a Democrat running for Texas lieutenant governor, expressed skepticism that the roundtables would lead to significant change. “All I hear is talk. Talk is cheap,” Collier said on Twitter. “What we need is action.”

‘An example to change the gun laws’

Police arrested Dimitrios Pagourtzis, 17, at the Santa Fe school following the rampage that they said he carried out with a shotgun and .38-calibre pistol. He has been charged with murder.

Two teachers and eight students, including Pakistani exchange student Sabika Sheikh, 17, were killed in the attack, police said. Her father, Aziz Sheikh, said Monday he hoped the death of his daughter, who wanted to serve her country as a civil servant or diplomat, would spur gun control in the United States.

“Sabika’s case should become an example to change the gun laws,” Sheikh said in a phone interview from the family home in Karachi.

Abdul Aziz Sheikh shows a picture of his daughter Sabika in Karachi, Pakistan, on Saturday. He says he hopes her death will spur gun control in the United States. (Fareed Khan/Associated Press)

Classmates at the school described Pagourtzis as a quiet loner who played on the football team. The attacker wore a black trench coat to school even in the Texas heat on Friday. Many of the aspects of the attack mirrored another American school shooting: The massacre at Columbine High School in Colorado in April 1999, when two teenage boys with weapons hidden under trench coats killed 12 students and one teacher.

In that attack, the teenagers had a shootout with police and ultimately died by suicide.

Police said Pagourtzis confessed to Friday’s killings after he was taken into custody but authorities have offered no motive yet for the massacre.

Pagourtzis’s family said in a statement it was “saddened and dismayed” by the shooting and “as shocked as anyone else” by the events.

Sadie Rodriguez, the mother of Santa Fe student Shana Fisher, who was killed in the attack, has said in media accounts that her 16-year-old daughter had rejected four months of aggressive advances from Pagourtzis. Fisher finally stood up to him and embarrassed him in class, her mother told the Los Angeles Times.

“A week later he opens fire on everyone he didn’t like,” she said. “Shana being the first one.” 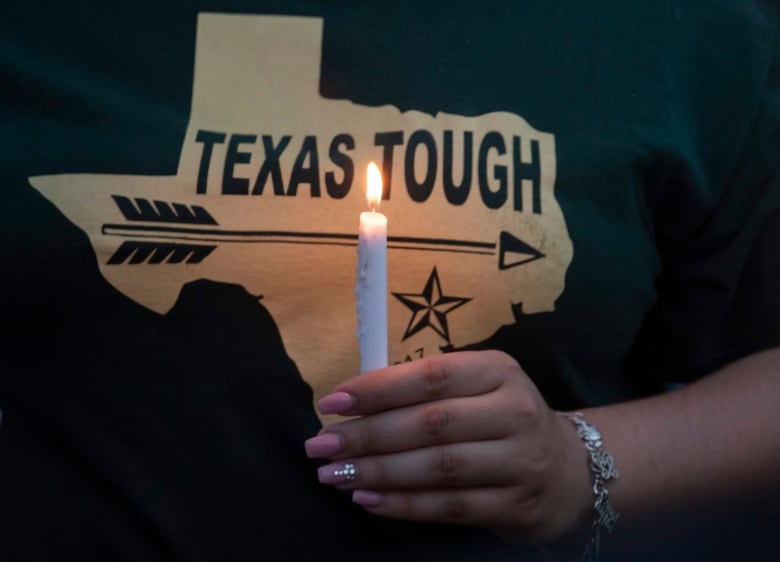 A woman wearing a Texas T-shirt holds a lighted candle during a vigil held in the wake of a deadly school shooting at Santa Fe High School on Friday in Galveston, Tex. (Stuart Villanueva/The Galveston County Daily News via AP)