Did you catch what Rudy Giuliani said about Donald Trump in that legally dicey Fox News interview?

No, not that Fox News interview. The second, possibly more incriminating one with Fox & Friends the morning after.

Trump seemed displeased by Giuliani’s chatter on cable TV, telling reporters Friday that the new addition to his legal team is “a great guy” who is still “learning the subject matter.” Throwing his hands up, he added that Giuliani will eventually “get his facts straight.” Giuliani later issued a statement walking back many his statements as his own personal views, but the damage may have already been done.

The payment to Daniels, whose real name is Stephanie Clifford, was made via a private limited liability company created by Cohen.

“They funnelled through a law firm. Then the president repaid it,” Giuliani said.

In the two interviews, experts say, Giuliani’s televised remarks managed to imperil Trump on federal ethics violations and may have also resolved a question that would give legal basis to nail the president’s campaign for breaking campaign finance laws.

Giuliani, left, told Fox News host Sean Hannity on Wednesday night “the president repaid” his personal attorney Michael Cohen the $130,000 payment made to Daniels. It was a direct contradiction of the president’s previous denial that he had any knowledge of the hush-money payment. (Screengrab)

The key question: Was the Daniels payment a personal expenditure, or was it campaign-related and thus illegal?

To Trump’s legal team, it was probably best left ambiguous. The president risks breaking campaign finance laws on excessive outside contributions if the $130,000 Daniels payment can be determined to be campaign-related. It remained unclear whether the hush money to suppress Trump’s alleged affair with Daniels was linked to his campaign. That is, until Thursday — when Giuliani seemed to give it all away on Fox & Friends.

“Imagine if that came out on Oct. 15, 2016, in the middle of the last debate with Hillary Clinton,” Giuliani told the hosts. “Cohen made it go away. He did his job.”

“He unfortunately added that Cohen was ‘doing his job’ — and what was his job? To keep these things from screwing up the election, it seems,” Cotter said.

In a statement mean to “clarify” his views on Friday, Giuliani wrote that “the payment was made to resolve a personal” allegation against Trump, adding that “it would have been done in any event, whether he was a candidate or not.”

But many legal scholars say Giuliani’s TV appearances effectively blew up his argument that Trump paying Cohen back the $130,000 rendered the whole arrangement “perfectly legal,” seeing as there no limits on what a candidate can spend on his or her own race. (Trump tweeted that he reimbursed Cohen by putting him on a “retainer” for his services.) 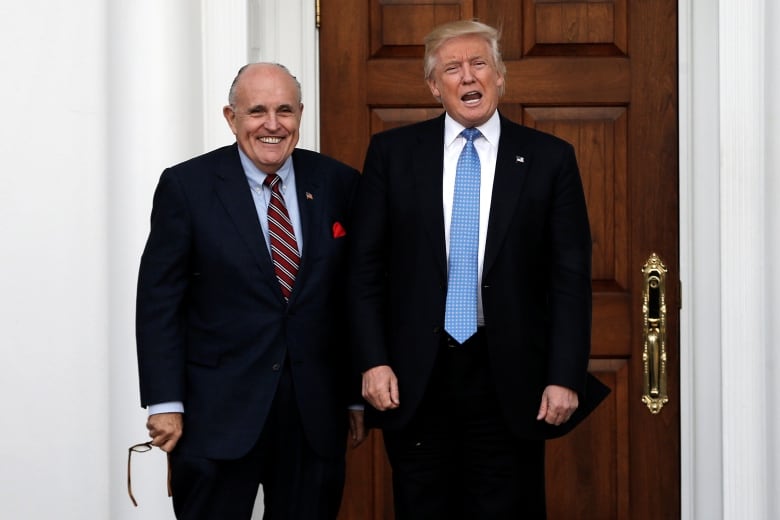 But to experts, that seemed like an illegal, excessive “in-kind” contribution that could amount to a violation of Campaign Finance Laws, coming just days before the 2016 presidential election.

The Campaign Legal Center’s president Victor Potter wasn’t buying Giuliani’s argument. Potter said in a statement on Thursday that the admission Trump repaid Cohen “destroys” the argument that Cohen was merely making “an independent expenditure” rather than a campaign contribution.

That’s an admission, he said, “that the confidentiality agreement and the timing of the payment influenced the 2016 elections.”

And then there’s the problem of Giuliani and Trump apparently admitting that the president lied. Giulinani also tried to clean that up on Friday, backtracking on his suggestion that Trump became aware months ago that his payments to Cohen were being made to Daniels.

Giuliani wrote that his references were not meant to describe “the President’s knowledge,” but rather his own “understanding of these matters.”

That didn’t jive with what many analysts interpreted as Giuilian’s admission on Fox News that Trump knew about repaying Cohen the $130,000 — remarks that directly contradicted what the president told reporter last month.

Documents and electronic devices seized from FBI raids of Cohen’s property, as well as the investigations that led to that raid, may have revealed Trump knew about the payments anyway, despite his previous denials. 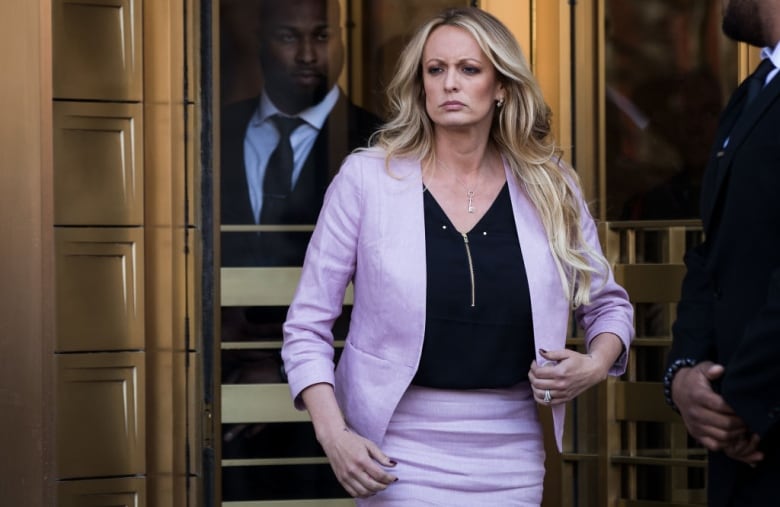 Adult film actress Stormy Daniels leaves a New York court on April 16. Daniels said she had a sexual encounter with Trump in 2006 and was paid $130,000 by lawyer Michael Cohen to keep quiet. (Drew Angerer/Getty Images)

Cotter said this may have been a new strategy to get ahead of an eventual revelation and put the White House’s “best spin” on Trump coming clean about the payment.

“It made sense to me that they’re pursuing a strategy,” Cotter said. “Like, oh, Cohen is a lawyer, we paid him on a retainer, it was all very natural.

“But it seems to me it became problematical when Giuliani followed up” in the second Fox News interview.

Giuliani’s disclosures on Fox News also raise questions about the theory of money laundering “to hide the fact there was a federal election violation happening,” Cotter said.

Jan Baran, a Republican campaign finance legal expert, noted that Giuliani’s use of the word “funnelled” to describe channeling money to Daniels, while not a legal term, conjures up connotations “of something underhanded.”

He questioned why Giuliani didn’t use another euphemism less suggestive of laundering. 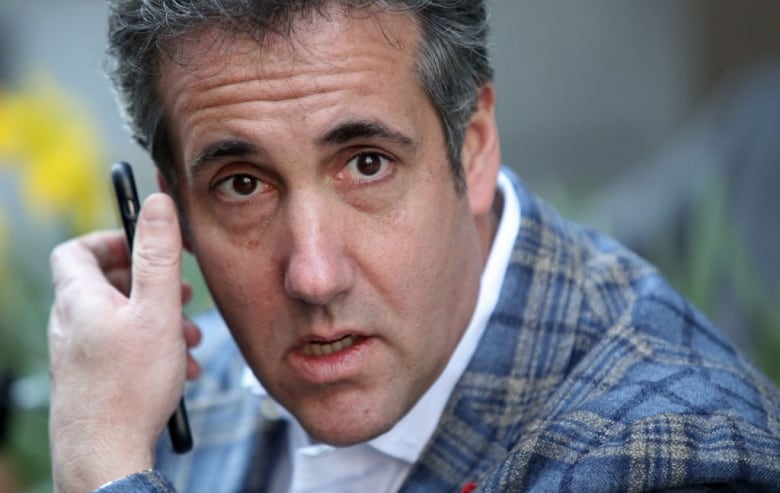 “Like saying, ‘We relied on other representatives to make sure the payment was effectuated,'” he said.

He argues that despite Giuliani’s remarks that Cohen “did his job” by paying off Daniels and avoiding election embarrassment, it remains difficult to prove the money was related to campaign spending, as opposed to being an expenditure “that just happened while the guy happened to be a candidate.”

The timing, in other words — a week and a half before the election — could be coincidental.

For the same reason, Baran dismisses assertions Trump broke campaign finance laws by not reporting the $130,000.

“You don’t have to report your alimony payments, do you? Or your mortgage payments? It has to be subject to campaign laws. And if it’s not subject to the laws, it doesn’t have to be reported.”

But even separated from all campaign finance law issues, Jordan Libowitz with Citizens for Responsibility and Ethics in Washington (CREW), a nonpartisan watchdog, said repaying the money over the course of a few months doesn’t clear Trump. If anything, it raises ethics problems.

“That sounds like a loan to us. Cohen fronted the money, Trump then paid him back … it’s not that different than any other kind of loan.” 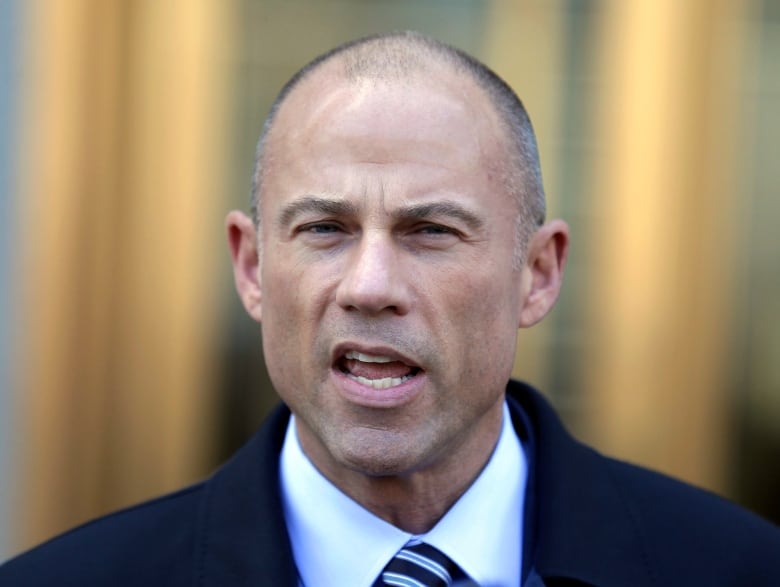 What makes that troubling, Libowitz said, is that Trump never disclosed the liability on his public financial disclosures, “which he signed and attested to be true.”

There can be criminal penalties for false statements, and CREW has submitted complaints through the Department of Justice and the Office of Government Ethics to look into whether the Cohen payments to Daniels constituted an undisclosed loan.

“There was reason to suspect it before, but it seems very clear now after Giuliani’s statements” on Fox News, Libowitz said.

In a statement, CREW’s executive director said: “It’s not often that the president’s lawyer goes on television and appears to confirm one of our complaints.”

Trump’s and Giuliani’s changing stories about the payoff raise another problem. Daniels’s lawyer, Michael Avenatti, sounded delighted on MSNBC, saying the about-face from Trump helps advance his client’s mission to make Trump sit for a deposition to clear up a very tangled story.

“The likelihood of us ultimately having a chance to depose the president went up exponentially,” Avenatti said. “And there’s a much greater likelihood of that now, because of the ever-changing stories and because of some of the admissions that have been made.”

Mr. Cohen, an attorney, received a monthly retainer, not from the campaign and having nothing to do with the campaign, from which he entered into, through reimbursement, a private contract between two parties, known as a non-disclosure agreement, or NDA. These agreements are…..