A newly discovered bee with a silly grin has been named after the Manitoba researcher who found it.

Called Epeolus gibbsi, the black and white insect bears the name of Jason Gibbs, University of Manitoba Assistant Professor of Entomology, who discovered the new species a few weeks ago.

“I’ve been working as a bee taxonomist for about 12 or 13 years and this the first time I’ve ever actually had a species named after me that I had gone out and collected myself,” he said. “So this was really exciting.”

The bee was discovered as Gibbs and his wife were in Spruce Woods Provincial Park a few weeks ago collecting insect samples. The pair scooped up numerous insects and brought them back to the lab, where Gibbs got a better look at the bee under a microscope.

“It didn’t quite fit any of the species that we were supposed to have,” he said, so he sent it to an expert at York University in Toronto, who confirmed the bee was undiscovered.

The new bee is special in several ways, said Gibbs.

“Most people wouldn’t necessarily recognize it as a bee. It’s black and it’s got white stripes. They might think of it as a wasp, but it’s unique in that way.”

Its markings also include two white spots on its back and a curved white line on its midsection, resulting in what looks like a smiley face, when you look at it the right way. 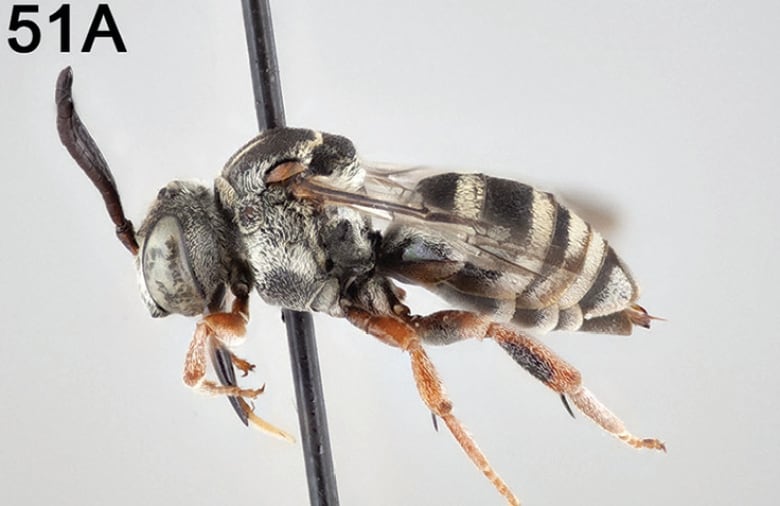 The new bee is one of about 350 bee species in Manitoba. (Thomas M. Onuferko/ZooKeys)

This isn’t the first time a bee has been named after the researcher — Gibbs said two other bees bear his name, including one in Nigeria and one in Mexico. However, those bees he didn’t personally collect, he said.

On the planet, it’s thought there are about 20,000 different species of bees, Gibbs said. In Manitoba, the number of bee species hovers around 350.

While some of those species are at risk, it’s sometimes hard to gauge, he added.

“This bee really highlights how little we actually know about our native pollinator communities. There’s a lot of interest in pollinator conservation globally,” Gibbs said.

“But we still haven’t even scratched the surface of what diversity we actually have and it’s very difficult to conserve things you don’t even know exist.”