Two mannequins with black tape across their mouths holding a sign with a statement about reconciliation wore garments from Chippewar at the opening party for Indigenous Fashion Week Toronto on Sunday.

The last-minute contribution was by Chippewa artist Jay Soule, after organizers reached out to see if he would dress a mannequin. Soule creates silkscreen-printed clothing with politically-charged pop art.

“I was kind of nervous thinking, ‘What am I going to do? My clothing’s street wear, it’s not really fashion-fashion,'” he said.

​While Soule was initially asked to dress one of the mannequins, he requested a second to also show a ladies outfit.

“In the back of my mind I was setting it up, knowing that I want to have both mannequins and then have a banner going between them,” said Soule.

He placed the tape across the mouths at the last minute to signify Indigenous people being seen and not heard.

The banner is part of a series of public displays by Soule in Toronto aimed at creating a dialogue about issues facing Indigenous communities.

The mannequins for the Indigenous Fashion Week Toronto opening party at the Royal Ontario Museum are the most recent edition of Soule’s billboard projects.

Earlier this year, after the acquittal of Saskatchewan farmer Gerald Stanley in the death of Colten Boushie, Soule was listening to an episode of Duncan McCue’s Cross Country Checkup that has been dedicated to Boushie.

“An older gentleman called in and he said some really generalized racist remarks about how we’ve got to stop using tax dollars to pay for these Indians,” said Soule.

“I was having one of those moments where you’re screaming at the radio.”

He redirected his frustration into the first in a series of billboards and banners that have been appearing in Toronto and online.

At the corner of Spadina Avenue and Richmond Street W., Soule placed the first banner that addressed the myth that tax dollars go to First Nations, explaining how the monies received are payment from land and resources, treaty annuities, and interest payments from a federally-controlled trust fund.

A table, some chairs and a dialogue

The banner used at the ROM installation had been used previously when Soule set up in the intersection where the second of his billboard series was installed.

Soule said he was Inspired by an Internet meme of a man sitting behind a table with a banner that read, “Male privilege is a myth, change my mind.”

“I thought ‘I’ll become a meme,’ so I made the banner, took a table and chairs and went down in front of the billboard,” he said.

Most of the feedback he received that day was positive and opened up a dialogue about the meaning of reconciliation. 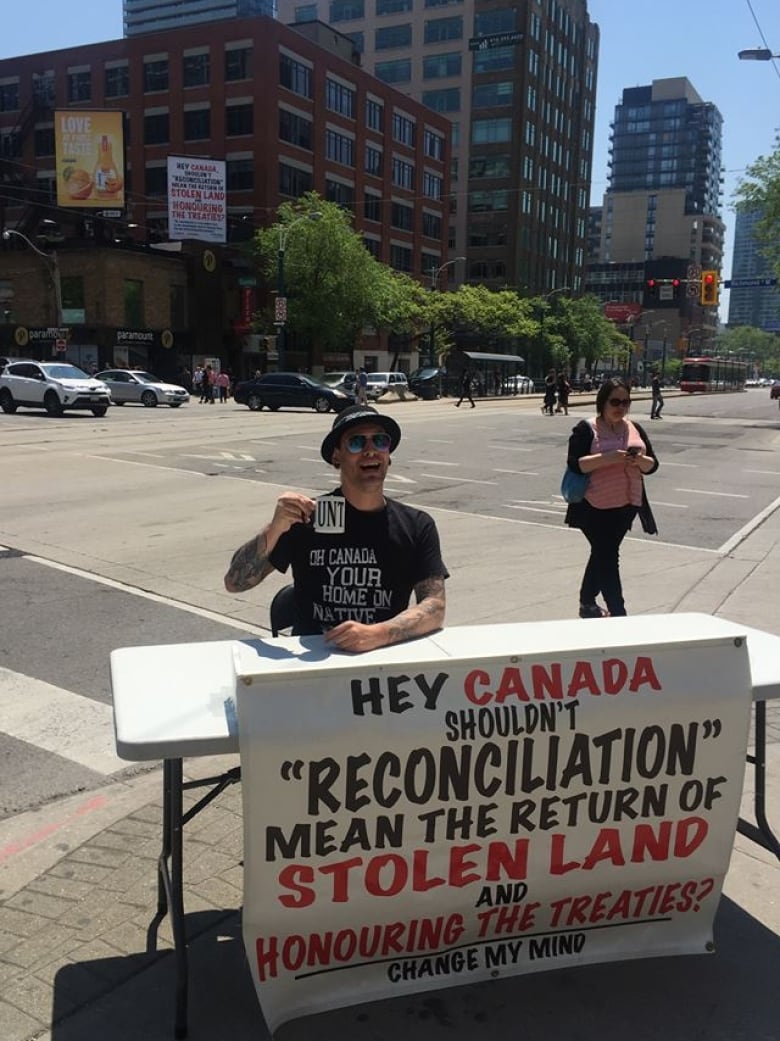 Set up in front of the second piece of his billboard project, Jay Soule sits at a busy Toronto intersection asking people to change his mind about the statement on the banner. (Submitted by Jay Soule)

Since then Soule has installed another billboard in the same space as the first.

“I use my voice as an artist to put out these ideas and these messages,” he said.

Soule said he hopes his work will plant seeds of thought with people who see the pieces and encourage constructive conversations around controversial topics and assumptions surrounding Indigenous people.

“It’s our job as Indigenous people just to take up space and Indigenize it,” he said.

“I try to infuse Indigenous culture into spaces where it wouldn’t have ever been.”

Soule will have a booth set up at the Indigenous Fashion Week Toronto marketplace June 2-3.