Growing up in Gimli, Man., Norm Shewchuk was passionate about hockey.

But in 1983, a life-altering accident ended his dream of playing the game.

“I was 16 and playing league hockey, and I just went for the puck in the corner and I got cross-checked from behind and I went headfirst into the boards,” Shewchuk said in an interview with CBC News.

The hit shattered his C5 and C6 vertebrae, leaving him a quadriplegic. But it didn’t sour Shewchuk’s passion for the sport.

Shewchuk, who moved to Alberta in 2009, has lived for the past three years at Mary Immaculate Care Centre in Mundare.

It’s where he’s had a chance to really focus on his art.Norm Shewchuk, who became a quadriplegic after he was crosschecked in a hockey game, uses a magnifying glass to create art 1:42

Shewchuk has no use of his fingers but that hasn’t stopped him from using a magnifying glass and the sun’s energy to burn images into pieces of wood, 20 inches high by 18 inches wide.

A brace on his right hand helps helps him hold his tools — the magnifying glass, a pencil and a knife.

“To me, doing this isn’t really a big deal because I’ve been doing it for so many years, but people enjoy the work,” said the 52-year-old Shewchuk, who started out by making a nameplate for his brother’s lake lot.

Recently he’s started making sports team logos. And over the winter, he found an image of Oilers captain Connor McDavid that he burned into a piece of wood.

When Shewchuk’s niece visited him recently, she took a photo of the McDavid art and tweeted it to her followers. Since Monday it’s been liked nearly 800 times.

“It’s pretty humbling, [I’m] trying not to let my head get too swollen,” said Shewchuk, who isn’t on Twitter or other social media.

18 hours to burn McDavid into wood

The process of finding an image, cutting it out, tracing it onto the wood and then burning it in can take him up to 60 hours, Shewchuk said.

The burning alone for his McDavid piece took 18 hours.

“It’s nice to do this on a breezy day,” he said, “because the smoke gets blown out of your face because I’m almost right over it.”

When Shewchuk’s niece visited him recently, she took a photo of her uncle’s McDavid picture and tweeted it. Since Monday it’s been liked nearly 800 times on Twitter.

“It’s pretty humbling, [I’m] trying not to let my head get too swollen,” said Shewchuk, who isn’t on Twitter or other social media.

At his care centre, other residents know his work well.

Most of the rooms have name signs outside their doors, courtesy of Shewchuk.

“They all love it, they all say that he’s an artist,” said Karen Turko, who works at the centre.

Turko said she loves it when Shewchuk is out on the deck, burning away, because it gives off a campfire smell.

“I thought he was just using a pen at first,” she said. “I didn’t realize it was burning at first when he started doing it. It is just amazing to watch him.” 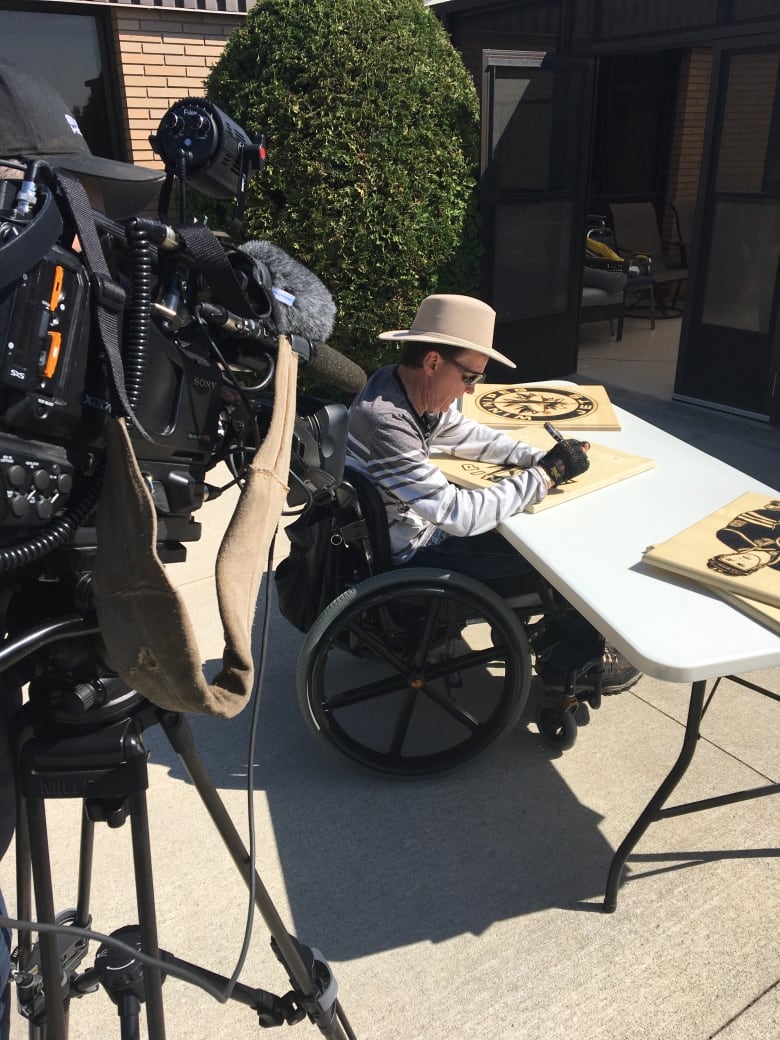 Shewchuk says he only makes team logos or nameplates as favours to friends and family. He hasn’t sold any, and doesn’t plan to.

“They all kind of grow on you, each one. You don’t really want to give them away after you’re done.

“Connor’s not going anywhere. He’s going up on my wall.”

Despite being from hockey-mad Manitoba, Shewchuk said the Oilers have always been his team.

He started following the team in 1981, in the Gretzky era. He even has a signed picture of No. 99 hanging in his room. It’s from 1984, a year after Shewchuk was injured.

But his favourite player now is McDavid.

As for making more McDavid pieces, Shewchuk said he’d like to make at least one more.

“He would look good with a [Stanley] Cup over his head.”